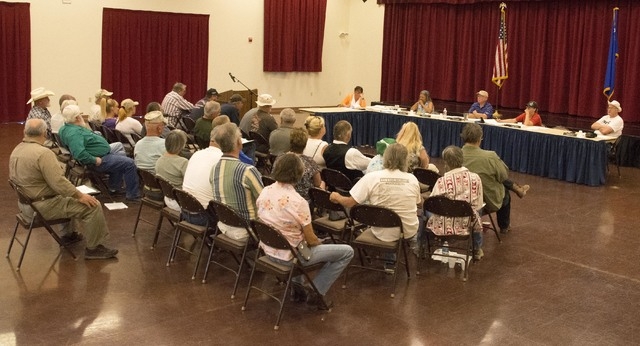 That is the general, sometimes heated reaction of a large group of Beatty residents and business owners to proposed changes in Nye County Building Codes and the adoption of special use permits.

The Beatty Town Advisory Board held a workshop April 20 to discuss the changes and get public response, and they certainly got plenty of the latter.

The county is in the process of updating its building codes to be in compliance with the 2012 International Building Codes, which the state already adopted. This update process is routinely done every few years to keep up to date.

One thing that got Beatty residents stirred up was language indicating that the county is looking to make the codes that have applied only to the Pahrump Regional Planning District effective throughout the county.

Rural Nevadans, Beatty residents included, have a long-standing desire to be left alone by government, and this set the tone of the meeting, along with ill-feeling toward a county government dominated by Pahrump.

One resident complained that Pahrump was “taking all our money,” referring to cutbacks in law enforcement in Beatty as well as the recent decision to end subsidies to the Beatty Clinic and Beatty Senior Center.

Another complained that “Pahrump wants us to adopt their rules.”

Several business owners said that adoption of the proposed changes would hurt business in the town and kill economic development. Others wondered how the county, strapped as it is, would pay for inspections and how much delay it would introduce into the development of projects.

When Nye County Planning Director Darrell Lacy arrived later in the meeting, he was bombarded with questions and complaints. Several times, audience members said a vote should be taken to show that the community does not want the changes, but Lacy said that Commissioner Lorinda Wichman had already made their position clear.

Lacy said that the commercial building codes already apply to Beatty and to the rest of the state because the state adopted them.

He said that the state did not adopt residential codes, but the county had adopted them for the Pahrump Regional Planning District. He said that the main thing that is more stringent in Pahrump is the requirement for soil and foundation testing, which he said is a response to problems they have had there.

Lacy said that the intent is to make residential codes optional in the rest of the county so that owners who want their homes built to code may do so. He said that some people have had trouble getting insurance on homes that were not certified as built to code.

The list in the draft of things that would require special use permits had also angered residents and business owners. Along with things like marijuana enterprises and brothels, the list included things like amusement parks, kennels, billboards, mobile home parks and even hotels/motels.

The overwhelming reaction was that requiring SUP’s for new businesses would stifle economic growth and development. Lacy said a couple of items on the list are mandated by the state, but that the bulk of the list was intended for discussion purposes.

“We’re not trying to force anything from county level,” said Lacy. “We’re just trying to give you some tools.”