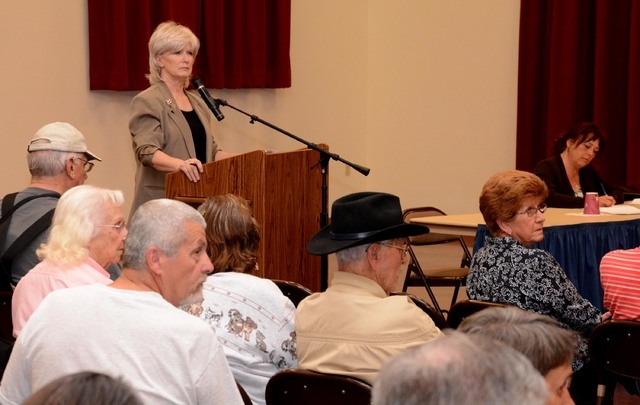 Nye County Commission Chairwoman Lorinda Wichman was there to listen to their concerns and explain the commissioners’ decision. Wichman said that since she has been on the board, she has not seen a year that the county had not had a budget shortfall. She blamed the recession and the state’s tax policy.

She said that, unlike some other states, Nevada bases assessed value on a property’s replacement value. When the housing market fell apart in the recession, not only did property values fall, but so did replacement costs. This reduced assessed valuations by as much as 40 percent, and then the state also imposed a 3 percent cap.

She said the economic woes the county is dealing with are the consequences of being “the most tax friendly state.”

Asked about Payment in Lieu of Taxes money, she said, “Every single year I have found myself in Washington, D.C., begging PILF.”

She quickly squelched the rumor that the Beatty Senior Center was being closed. She explained that the county had only eliminated its subsidy of the senior nutrition program, which is largely funded by grants, and that the county is searching for other grant sources.

Board member Erika Gerling said that efforts are being made to “keep the level of service the same.”

The biggest concern for most Beatty residents was the elimination of the county’s subsidy to the Beatty Clinic. The annual subsidy for the Beatty and Amargosa clinics amounted to $312,000. With the withdrawing of the subsidies, residents expected that these clinics will close.

Representatives of Nevada Health Centers, which operates the clinics, were on hand, and Chief Executive Officer Walter Davis assured the residents that the company will do all it can to keep the clinic open.

“We were just as shocked (by the cuts) as anyone here,” Davis said. “We have to figure out how to come back and reorganize some of the things we have on our plate.

“We believe that health care should be local. We have a commitment to the town.”

He said that Nevada Health Centers “may have to look at how to redesign our operation,” but he said, “Our goal is to continue to have a health center in this community.” He also said that no decision will be made for at least 60 days.

Wichman also addressed the currently tabled bill to alter the county’s building codes. Wichman said, “I do not want to paint the whole county with a big, broad brush.” She said she favors a special permit system for commercial building that would not apply to private residences.

She also said that the county’s approach to building code enforcement has been on a complaint basis, not going out and looking for violations. She said that adopting and enforcing the Uniform Building Codes, “would be onerous on us all out here, and would stretch county dollars and county employee time.”

Sheriff Sharon Wehrly explained the impact of the cut to the D.A.R.E. program. She said that the two officers involved in that program would be moved into other duties, “bumping” two officers with less seniority.

Wichman said that the $800,000 cut to the Tonopah jail budget would convert it into a holding facility as was already done in Beatty.

The County Commission on March 3 approved $2.3 million in subsidy and budget cuts by a 4-1 vote, with Commissioner Donna Cox voting against the proposal without comment.

County Manager Pam Webster said the county is facing a $2.5 million shortfall, driven by lower-than-projected property and consolidated taxes, to end this fiscal year, and as much as a $3.2 million shortfall for the next budget cycle starting July 1.

In an unrelated matter, Brad Hunt came before the board requesting that a flyer be distributed reminding people that the Amargosa River bottom is private property from Cottonwood Avenue to the Stagecoach Hotel and Casino, and that it is breeding season for the Amargosa Toad.

Hunt said that property owners in that area have been objecting to the creation of the walking trail system because they think it would increase the use of the river bed by quad and motorcycle riders who are already a nuisance.

The board approved the flyer idea, but some also thought there should be signs put up.