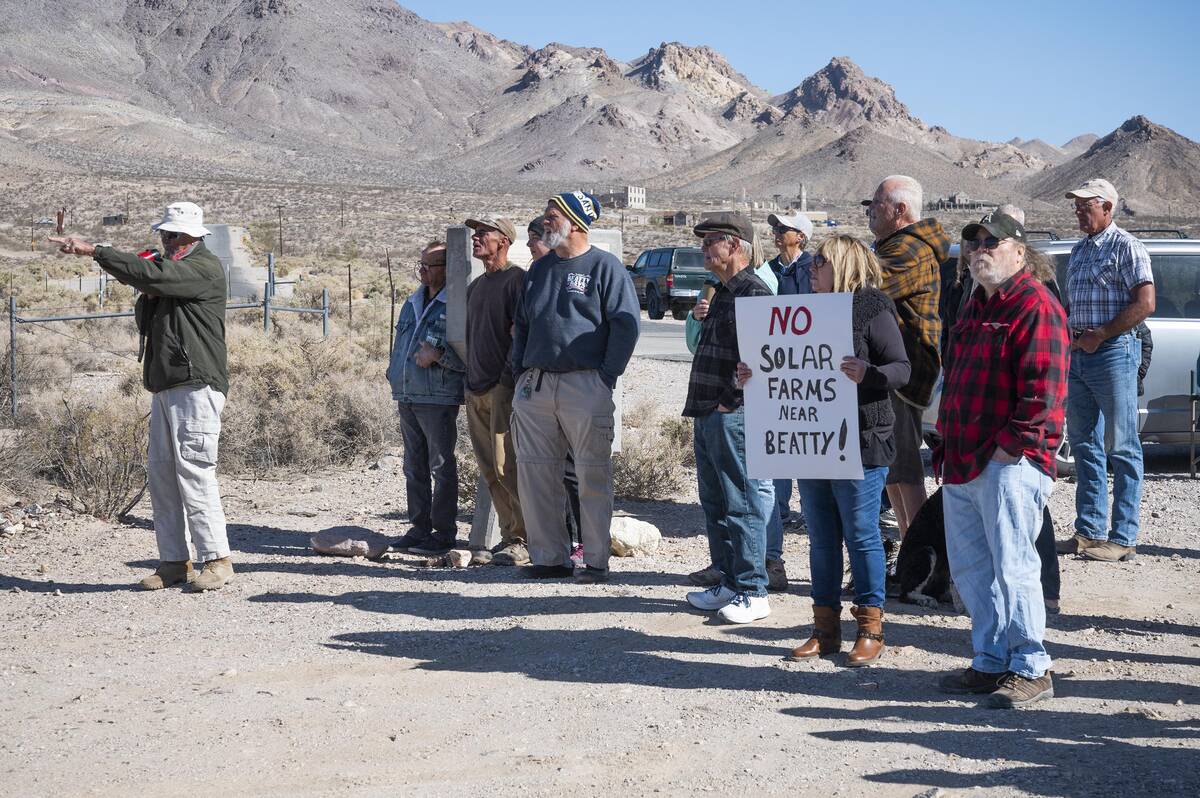 Richard Stephens/Special to the Pahrump Valley Times Karl Olson points toward the proposed solar farm location, with Rhyolite ghost town in the background.

Richard Stephens/Special to the Pahrump Valley Times Two vehicles with an anti-solar banner are parked at the site during a visit. 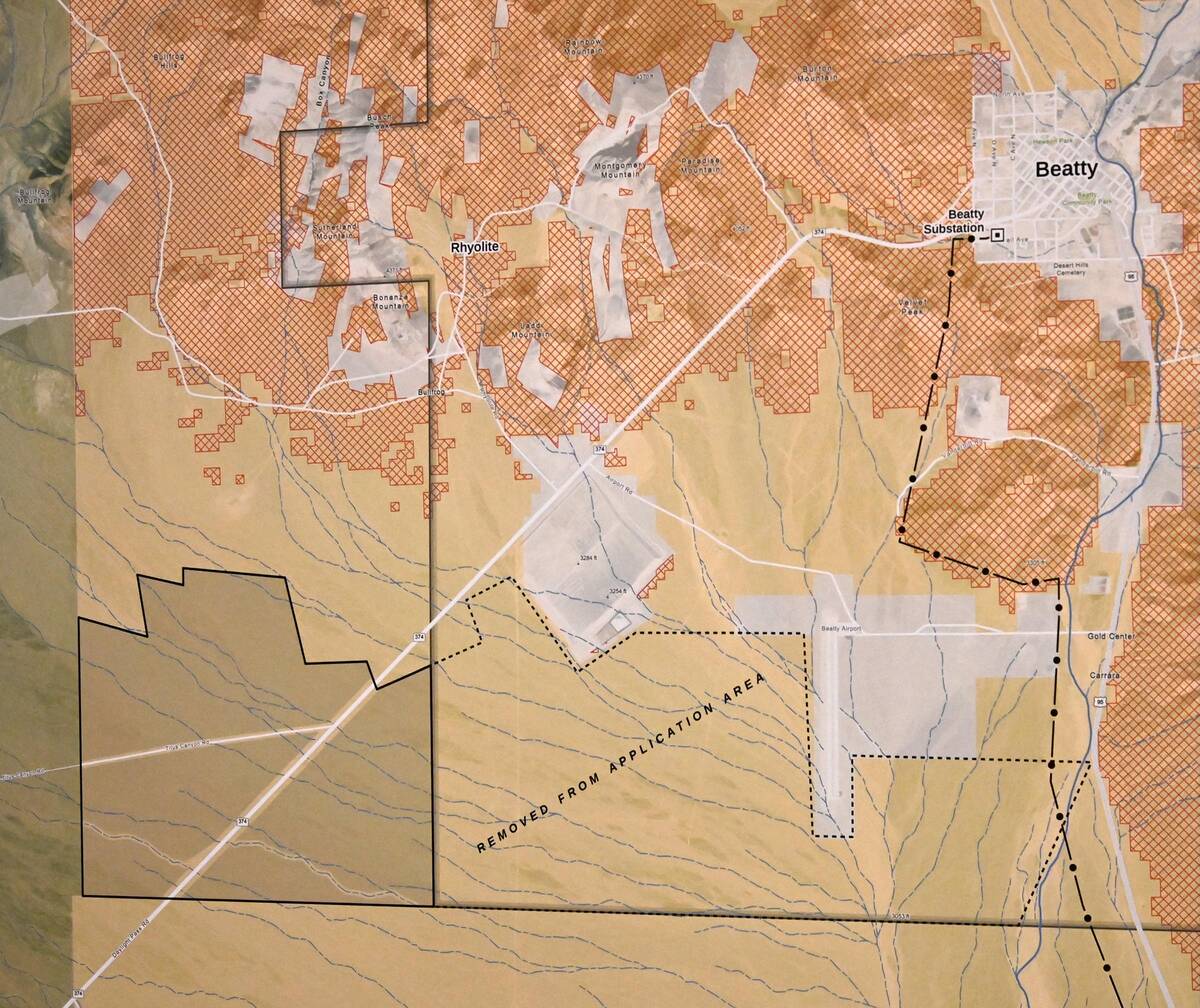 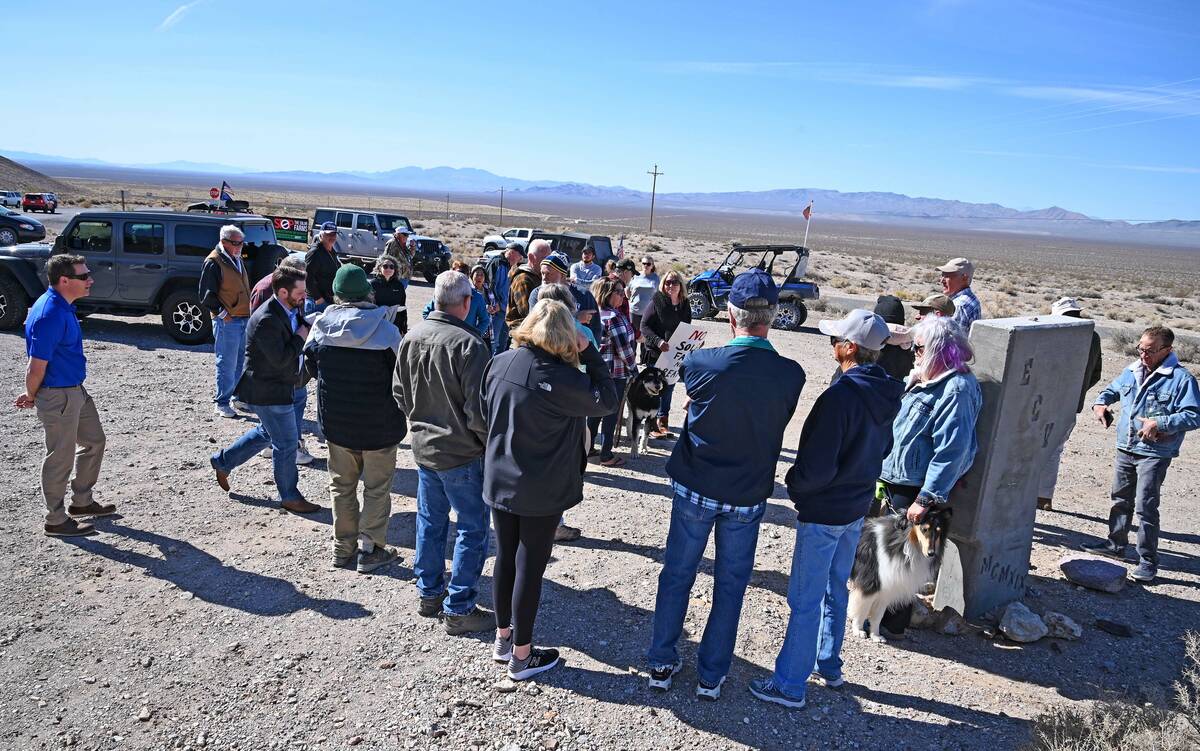 Richard Stephens/Special to the Pahrump Valley Times Residents and company representatives at the site visit, with the proposed solar farm location in the background.

Beatty resident Ann Marchand was moved to tears during a workshop with NextEra Energy April 23 as she spoke of Beatty’s history as a gateway to Death Valley and the impact the company’s proposed Beatty Energy Center project might have on the town’s tourism economy.

She said the project would “ruin our viewshed into the park,” and, “117 years of historic beauty is going to be skewed.”

She drew the greatest applause of the day from the crowd when she added, “The biggest gift you can give us is to find another location.”

Before the 10 a.m. workshop in the community center, many residents and some NextEra representatives took part in a site visit at the south entrance to Rhyolite which overlooks the area of the proposed solar energy plant.

Some of the residents carried handmade signs with messages in opposition to the project, and a large printed banner strung between two vehicles read, “Stop the solar farms from destroying our back yard! Keep solar out of the Beatty area!”

Rhyolite caretaker Karl Olson, speaking through a bullhorn, pointed out the affected area, saying, “These mountains can’t talk. This desert can’t talk. We’re the ones that have to talk for them.”

David Spicer spoke of the town’s investment in promoting itself as an off-road destination. “We don’t mind saving the world, but not at our cost,” he said, and encouraged NextEra to look into alternatives, concluding, “The last thing we want is something up our ass and down our throats.”

At the Community Center, Beatty Town Advisory Board Chair Erika Gerling addressed the NextEra representatives. “I’d like to say welcome to Beatty, but I can’t say that.”

The board and audience then watched a presentation from NextEra, in which company representatives tried to address many of the objections they had already heard and touted ways in which the company could benefit the community.

Once again they heard locals’ concerns about the viewshed, the disruption of off-road activities, possible creation of a dust hazard, the possible effect of glare from solar panels on aircraft approaching the Beatty airport, and more.

Laura Cunningham asked why they were not building in the Amargosa Solar Zone instead, to which a company representative said that they had applied there, but it had not been opened up yet by the BLM, and that site would not be big enough to supply demand.

Kevin Emmerick asked whether the company would compensate the town for the loss of tourism revenue. A representative replied that they had not seen evidence of a change in tourism resulting from their similar project adjacent to Joshua Tree National Park.

John Lupac said that he didn’t believe the town’s infrastructure and schools could handle the impact of the solar project combined with the expected influx of population from mining.

A NextEra representative addressed worries about water use saying that other than during construction the project would use little water, as they do not customarily wash the solar panels.

Melody Koivu expressed concern that fencing around the project would exclude the wild burro population from needed grazing area.

Rupert Bragg-Smith noted that he is the biggest property owner close to the proposed solar project. A lover of the Old West, Bragg-Smith lamented, “The view of the West is gone,” and said the project would destroy the property value of his land. “No one will want to buy it.”

The company displayed a map showing the land they were applying for, which is reduced to about 3,000 acres, down from the original 6,500 acres.

They said it would avoid the Titus Canyon road, although the amended map still showed it as including a portion of that road where it branches off Highway 374 near Rhyolite.

Although those projects were presented as separate and not as alternatives to the Beatty Energy Center, some residents found them more acceptable. Others, however, were opposed to them also.

The Beatty Energy Center project also differs from the other two in that it is not dependent on the proposed Greenlink West power line. It would use Valley Electric transmission lines, tying in at the Beatty substation.

Patti Butler, after hearing the company’s presentation, including their claims of what they could do for the town, said the company should spend the money to put it in a more remote location “instead of spending money to buy us off.”

“The bottom line,” said Dee Crawford, “is move it.”