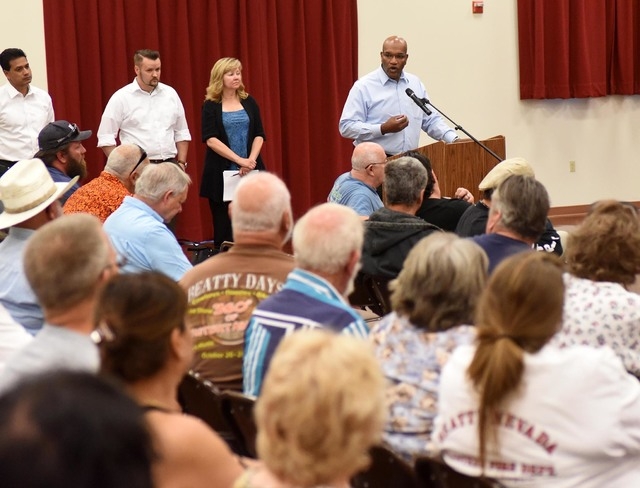 BEATTY — Town residents had plenty of questions at the Beatty Town Advisory Board workshop on health care on Tuesday.

They heard presentations from representatives of Nevada Health Centers, which currently operates the Beatty Clinic, and from Drs. Michael Reiner and Michael Jonak, who would like to provide care in Beatty.

Walter Davis, CEO of Nevada Health Centers, presented a tentative proposal to provide care to the Beatty and Amargosa Clinics by having each of them open two days and one half day apiece per week. The Beatty Clinic would be open Tuesday and Friday, the Amargosa Clinic on Monday and Thursday, and both for a half day on Wednesday.

Residents were not happy with the idea of not having the clinic open five days a week. Carol Johnston said that there were many residents who did not have cars and would not be able to drive to the Amargosa clinic.

“I want to be here five days a week,” Davis said. “But with the recent cuts we cannot keep operating at a loss.”

LaRene Younghans wanted to know if Nevada Health had done anything to try to increase their patient base and if they had looked anywhere else for grant money.

In response to the first question, Davis said, “We look at the demands of the community,” and as to whether they were looking for grant money, he used the word “feverishly.”

Teresa Sullivan said she wanted to see the company’s financials. She reminded them that they get the clinic facility rent and maintenance-free.

Assistant County Planner Joni Eastley reminded Davis of how hard it had been for her to get responses and financial information from Nevada Health. She said that she had finally received financial information and had shared it with the Beatty Town Advisory Board. The board’s treasurer, Erika Gerling said, however, that she found the numbers provided very confusing.

Eastley said that she understood that the Beatty Clinic had been operating in the black, but Davis said that was only with the subsidy from the county.

Ryan Gallagher said that National Park Service employees used to get work-related tests and physicals in Beatty, though he wasn’t sure why this was no longer the case, but this could be an additional source of revenue if it were able to happen again.

Gallagher also said that because of its location, the Beatty Clinic was a “lynch pin” in case of a large-scale emergency.

Dr. Reiner and Dr. Jonak said that they would like to provide health care in Beatty. Dr. Reiner said they had been interested in doing it for some time, but had held off because there was already a clinic here.

Jonak said that they would not ask for any money from the town or county. They would like the same dollar a year lease on the facility, which, when asked how long a lease, Reiner said “five years or longer,” saying they might eventually want to buy it.

He said that they would offer five day a week care in Beatty, but would not be providing service in Amargosa Valley.

Reiner also said that they would do house calls in Beatty if scheduling at the clinic allowed time for it.

Jerry Hammes asked, “Do you have a business plan of how you can afford to do this?”

Reiner replied that they would not need a lot of staff. “I don’t have a corporate monster behind me that I have to feed. We know if we build it, and we’re here, the people will come. We provide quality care.”

Starla Gallagher wanted to know, “How do we know you won’t pull out in a year and leave us high and dry again?”

“Once I make a commitment, I don’t let it drop,” said Reiner.

The doctor also told Teresa Sullivan that they would be willing to commit to a period of time and to keep some of the existing clinic staff.

Board Chairman Dick Gardner reminded people how Dr. Scocia came to Beatty about four years ago eager to provide health care for the town, and how that fell through shortly after getting started.

Gerling said, “It is up to us as a community to see how we’re going to go forward. We need to tell whoever is interested, ‘This is what we are willing to provide, and this is what we want.”

The board is looking for firm proposals from both parties, hopefully before their May 18 meeting.

The discussion comes as Nye County has cut funding to the facilities to help close a $2.5 million general fund budget shortfall.