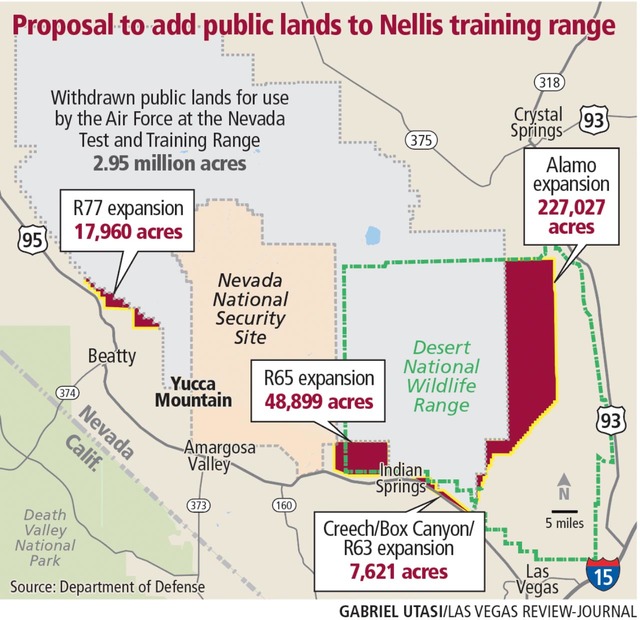 A map showing the proposed land withdrawl by Nevada Test and Training Range, including 17,960 acres northeast of Beatty

The Beatty Town Advisory Board joined Nye County commissioners in their opposition to land withdrawal for the Nevada Test and Training Range.

Based on the information provided at several meetings where the proposal was discussed last year, board Chairman Dick Gardner said the entity “strongly opposes” the proposed expansion of the range because of the negative economic, safety, environmental, archeological, and historical effects.

“We strongly urge the Air Force to reconsider their request. Beatty and the NTTR have been good neighbors and have enjoyed a great relationship since 1951, one we would like to continue into the future,” Gardner said.

The Air Force proposal includes withdrawing 17,960 acres northeast of Beatty into its already 2.95 million acre training and test range. The military is also asking to withdraw 283,547 acres in Clark and Lincoln counties.

In scoping comments concerning the notice of intent to prepare a Legislative Environmental Impact Statement for the Nevada Test and Training Range military and withdrawal at Nellis Air Force Base, Gardner said the small maps of the proposed withdrawal areas, and in particular, the northern area are “inadequate for a complete understanding of the issues.” Those maps show only some of the relevant features, and lack representation of many existing roads and trails, he said.

“It is the opinion of the community at large and therefore that of the Beatty Town Advisory Board that the additional land withdrawal… will have detrimental impacts on both the financial and physical well-being of the residents of Beatty and the economic development future of the town,” Gardner said.

Beatty’s concerns center on restriction of public recreational use of the area and its direct economic impact; access to and protection of water systems and the hydrogeology of the Oasis Valley and Beatty; access to historically-permitted grazing rights and hunting; public access to geological, archeological, and historical sites; impact on current species management efforts in the region.

Beatty currently advertises and leverages its proximity and access to trails, geology and history for the purpose of outdoor recreation, according to the documents. In the past few years, several community groups have been put in place that use the public lands near the town.

On average, room tax generates $280,000 or more per year which is apportioned per ordinance to the state, the county, the town park and Recreation General Improvement District and the town of Beatty, according to the documents.

The town’s portion, $100,000, funds the Beatty Chamber of Commerce, the Beatty Museum and events such as the Fourth of July, Beatty Days Celebration and various town projects.

Additionally, the information provided in the maps indicates that the headwaters of the Amargosa River would be included in the proposed land withdrawals, officials said in the documents.

“The proximity of the proposed activities to this important water system and the potential harm is of great concern to us. Our ability to monitor and study the headwaters is key to the health, safety, and long-term sustainability of our community. We cannot support a restriction of public access to such a critical resource,” Gardner said.

U.S. Air Force representatives stated that the proposed expansion would enlarge areas for range turnaround, during test and training missions, especially during “Red Flag” exercises, according to the documents.

Nye County commissioners previously said that the proposed military expansion in the northern and central parts of the county would have a negative impact on land, air space and water in the county.