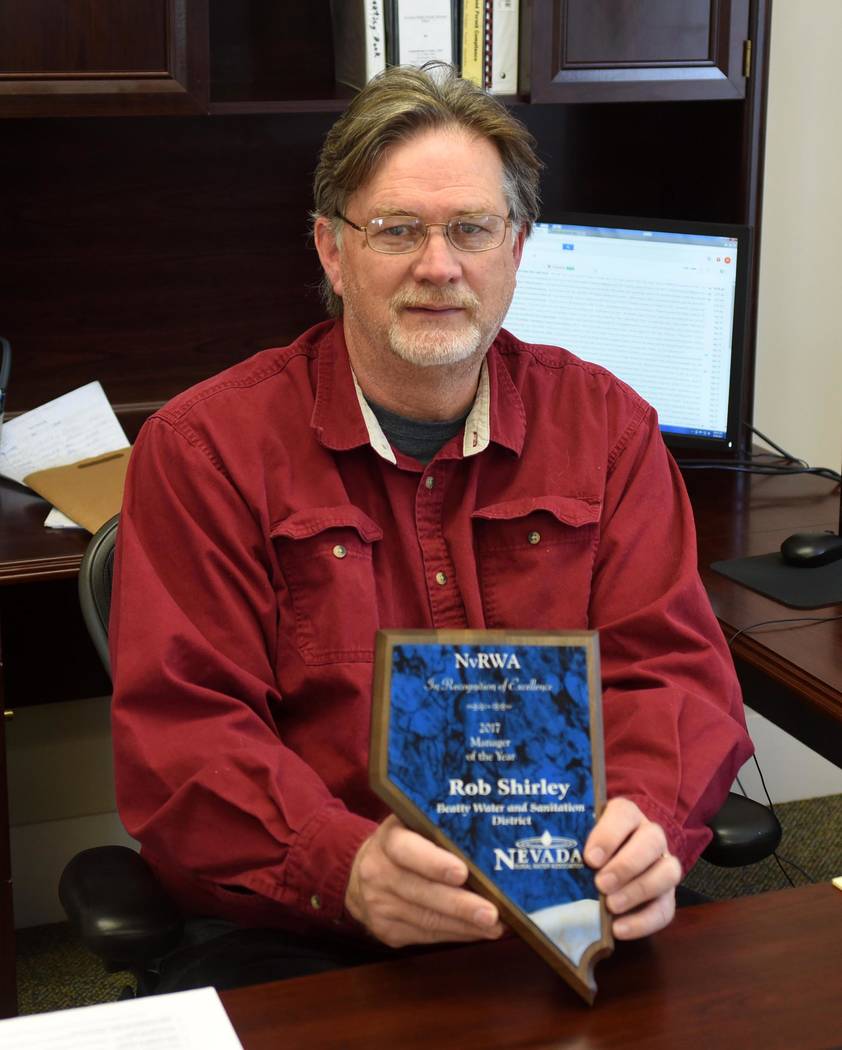 Richard Stevens/Pahrump Valley Times Beatty Water and Sanitation District General Manager Rob Shirley at his desk with the plaque he received with the Manager of the Year award from the Nevada Rural Water Association.

Shirley, who has been manager in Beatty for almost three years, was recognized for many accomplishments, some of which have saved the district tens of thousands of dollars.

In the award presentation, Shirley was credited with working well with the state in taking care of over $100,000 of fines stemming from an incident that took place before his arrival. This was “basically resolved by utilizing equipment and manpower to improve public areas as an in-kind-match.”

He greatly improved the flow of information to his board of directors and established a more cohesive working relationship.

Before his arrival the district’s new arsenic treatment plant was being manually operated twice a week to prevent nighttime alarms. It is now “up and running and is a model for operation of similar plants across the state.”

He made corrections in the billing process that increased district revenues by 20 percent.

Using borrowed equipment, all the sewers were televised and cleaned, and problem areas were located.

The district office was relocated to a central location more easily accessed by the public, and upgraded computers and software were installed.

Shirley was able to improve methodology used in water treatment and improve water quality, correct mechanical problems with the town’s deepest well, and made many other improvements.

Shirley, who plans to continue three more years before retirement, says that he asked himself two questions before taking the job: “Can you fix it?” and “Can you keep it stable?”

One of his current concerns is providing the town with an additional well to give it a better reserve supply of water. This may involve installing water treatment equipment in a well that is not in use or fixing another well that had problems with treatment in the past.

As for the award, Shirley says it was a surprise. “My staff turned in my application. I didn’t even know about it.”

He says that the award isn’t just for him. “It’s the staff. It’s the board. It’s the community. I couldn’t have done it without them.”