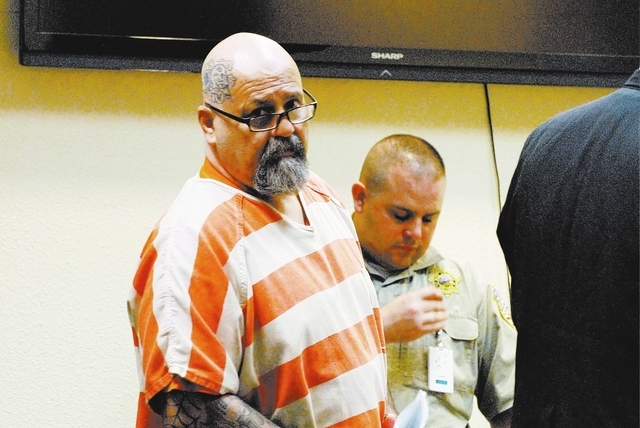 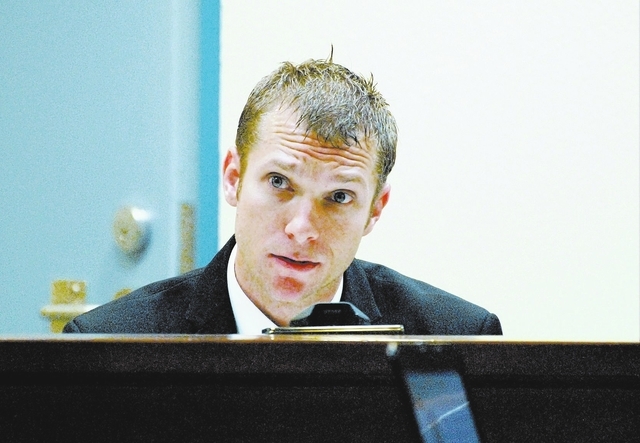 A man convicted of the attempted murder of a Nye County Sheriff’s deputy during a June 2012 shootout outside a home on Manse Road was sentenced to a maximum of 40 years in prison this week.

Edward Garza, 56, was sentenced to a term of 16 to 40 years and an additional 364 days in the Nye County Detention Center Monday when he appeared for sentencing on charges of attempted murder with use of a deadly weapon, assault with a deadly weapon and aiming a firearm at a human being, discharging a firearm where person might be endangered in District Court.

Despite a claim that he fired his gun in self-defense, a jury convicted Garza of the charges on Aug. 5 following a week-long trial.

The two counts of assault with use of a deadly weapon and assault with a deadly weapon, however, were merged into a single charge at sentencing after Garza’s attorney, Jason Earnest, argued the charges resulted from the same criminal act, not two separate acts, and therefore should be one count. Presiding Judge Robert Lane agreed and ordered the two charges be merged before he proceeded with sentencing.

Garza, a member of the Hessians motorcycle club, was first taken into custody in the case after Nye County Sheriff’s deputies were called to respond to a domestic disturbance with possible shots fired on June 30, 2012.

NCSO Deputy Summer Dannecker was first to arrive at the address of 4790 E. Manse Road and was followed less than a minute later by Deputy Wesley Fancher.

Dannecker reportedly asked Garza, who was sitting by the fence line of the property in a chair with a .32 caliber gun and .45 caliber gun at his feet, to stand up and show the officers his hands. It was at that time police say he reached down and pulled up the.45 caliber firearm in his right hand and pointed it at Fancher.

Fancher subsequently fired a single shot at the man just before Garza reportedly began firing at the officer and a shootout ensued.

The shooting ended after Garza suffered several gunshot wounds and was flown to University Medical Center in Las Vegas. Several days later he was released to the NCSO to be booked into custody at the Nye County Detention Center on charges related to the incident.

Neither Fancher nor Dannecker were injured.

Chief Deputy District Attorney Kirk Vitto read a letter from Dannecker at the sentencing describing how the shooting has impacted her life and the life of her family. Fancher took the stand to testify about the impact the shooting has had on his life as well.

“I will never forget the look on Fancher’s face after Garza fell to the ground and ceased fire. I looked over at Fancher and asked if he was okay and he asked me if I was okay. The whole event still seems unreal at times when thinking about it. We go to work each shift knowing the day can bring on anything and everything sometimes. But when it actually happens, it’s definitely an eye-opener and it changes you. No matter how much you train and prepare for something like this, and knowing these types of events come with our job, it’s still hard,” Dannecker’s letter read.

“My experience with Mr. Garza has affected my family and I with a constant reminder of how dangerous my job can actually be and that Fancher and I were actually lucky that day, unlike other officers and deputies in past situations. It’s a constant reminder from my now 11-year-old daughter who worries about me still each time I go to work and my fiancé who’s been on the scene of the last three deputy-involved shootings and has seen us lose a deputy due to being shot,” the letter continued.

Fancher told the court while he has since forgiven Garza for his actions that day, the June 2012 shooting will forever be in the back of his mind every time he conducts a traffic stop, responds to a domestic situation or answers any other call for service as a sheriff’s deputy going forward.

He said every call he has responded to since that day, he has pictured himself being shot, having to shoot someone else or even dying multiple times over in his mind before he has even reached his destination.

“Usually we show up to protect other people, but every once in a while you become the victim. It’s different to be a victim rather than to protect a victim and regardless of the training and preparation it comes as a shock,” he said.

The officer further added that was the day he lost his faith in humanity.

“I know it was by God’s grace that day that I was not shot. It was by God’s grace Mr. Garza is still alive, especially considering how the entire thing went down. It’s by His grace that Summer Dannecker is still alive. I do expect the justice system to hold up on its end of the bargain. I do expect justice to be served. And I just want you to know I forgive Mr. Garza. I forgive him for what he did. I can be straight up and honest about that. It doesn’t make it right, and justice still needs to be served, but I just want everybody to know, especially Mr. Garza that I truly do forgive you,” Fancher said.

Before Lane handed down his sentence in the case, Garza was allowed to address the court on his own behalf.

He said he was sorry for what had transpired that fateful afternoon and that if he could take back what happened he would.

“I would like to say first of all, I’m really sad that this whole episode happened. It’s affected a lot of people. Their families, my family, my children. It’s something really ugly that happened. I wish I could turn that clock back but I can’t. I’m not an evil person,” he said.

Earnest then argued to the judge he believed Garza was a good candidate for probation with a maximum underlying sentence should he mess up, or at the very least the minimum sentences on each count.

Vitto disagreed, telling the court he would be asking for the maximum sentence on the two counts before them.

“This 56-year-old man needs rehabilitation. He’s been a poly drug abuser for about 42 years. Alcohol, marijuana, cocaine, PCP, methamphetamine, acid, mushrooms, hydrocodone. And the beauty of the state’s recommendation is he’s going to get all the rehabilitation he needs where he belongs. Nobody’s saying Mr. Garza is evil. We’re saying as a result of what’s he’s done, these consequences must follow,” he said.

Lane ultimately sentenced Garza to 96 to 240 months in prison with an enhancement of an additional 96 to 240 months for the deadly weapon component to run consecutively. The judge additionally ruled Garza would have to serve 364 days in the county jail as well for aiming a firearm at a human being.