Vena Foster, whose sister died of COVID-19 shortly after becoming a mother, talks to the Las Vegas Review-Journal at her Henderson home Thursday, Sept. 2, 2021. After Foster's sister, Kimmie Pavone, was intubated, her baby was delivered by emergency cesarean section. (K.M. Cannon/Las Vegas Review-Journal) @KMCannonPhoto
By Mary Hynes Special to the Pahrump Valley Times
September 25, 2021 - 12:59 am 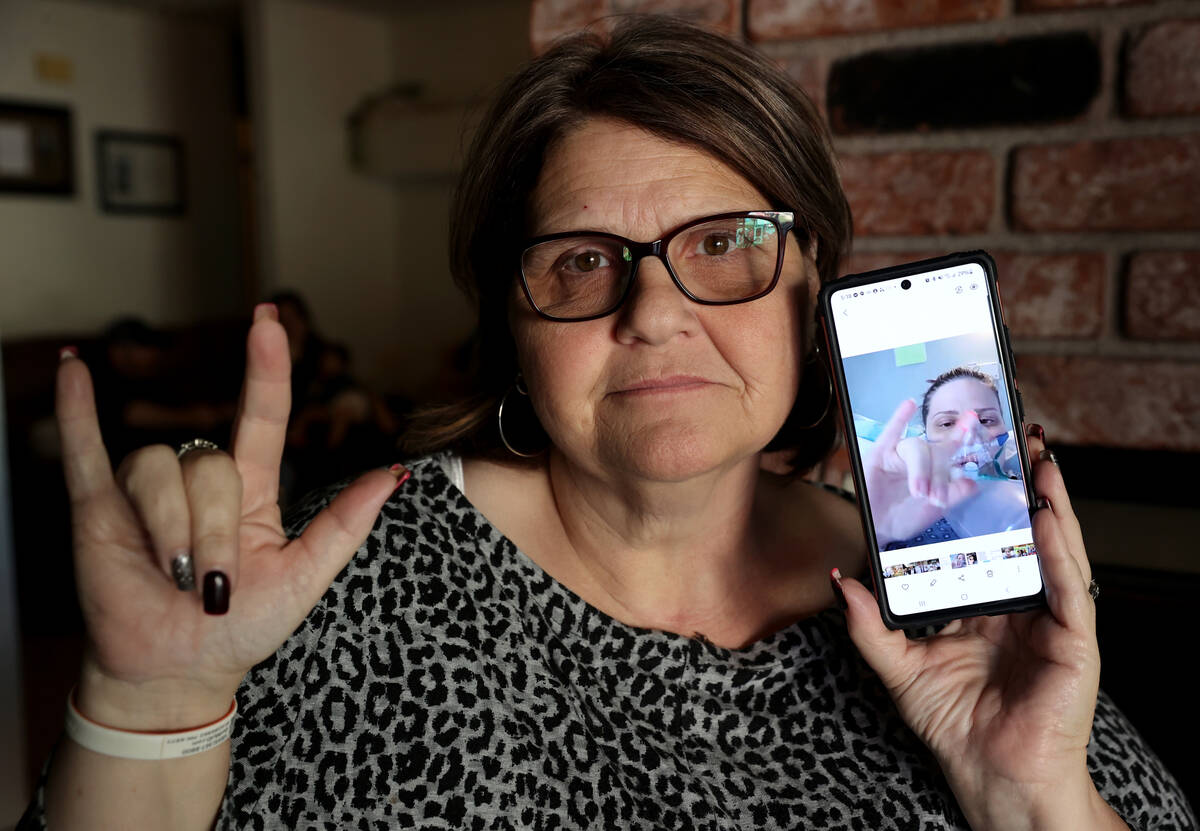 Vena Foster shows a photo at her Henderson home Thursday, Sept. 2, 2021, of her sister Kimmie Pavone giving the love sign from her hospital bed during a video call. Pavone died from COVID-19 shortly after giving birth to a daughter. Pavone's baby was delivered by emergency cesarean section. (K.M. Cannon/Las Vegas Review-Journal) @KMCannonPhoto . 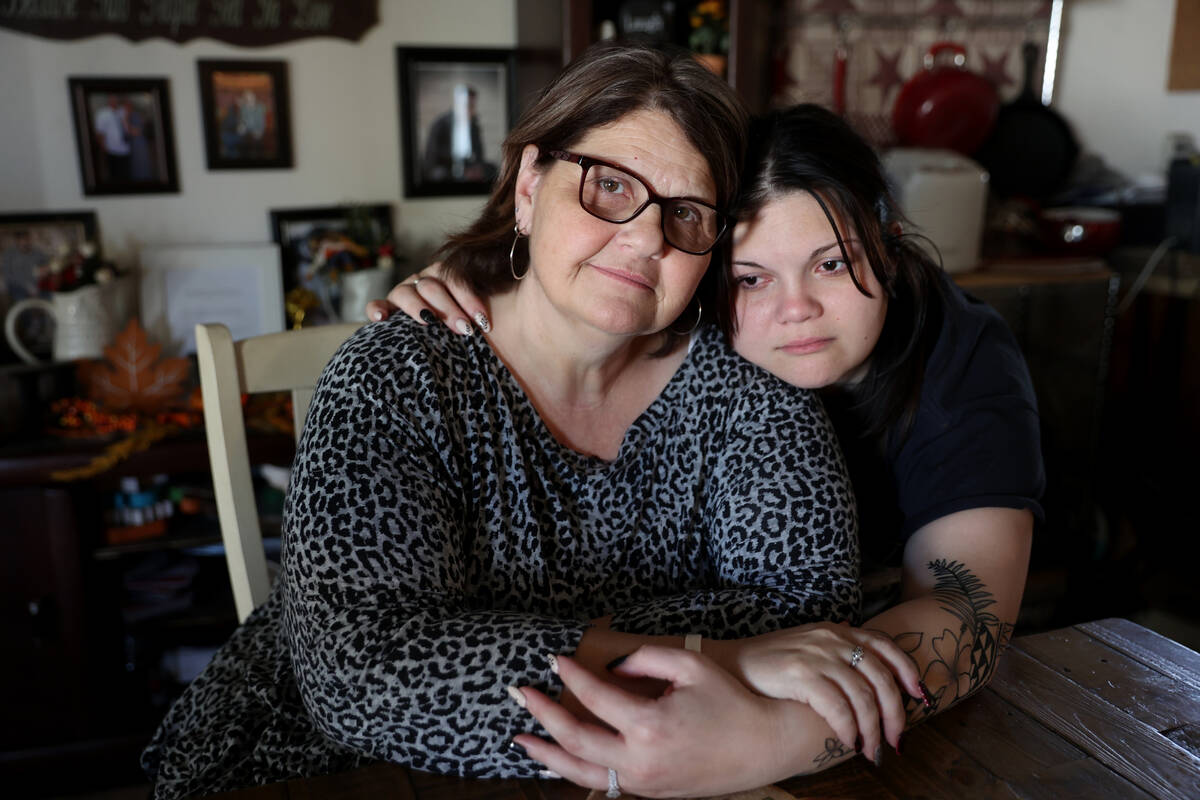 Vena Foster, whose sister died of COVID-19 shortly after becoming a mother, gets a hug from her daughter Malia Matney at her Henderson home Thursday, Sept. 2, 2021. After Foster's sister, Kimmie Pavone, was intubated, her baby was delivered by emergency cesarean section. (K.M. Cannon/Las Vegas Review-Journal) @KMCannonPhoto 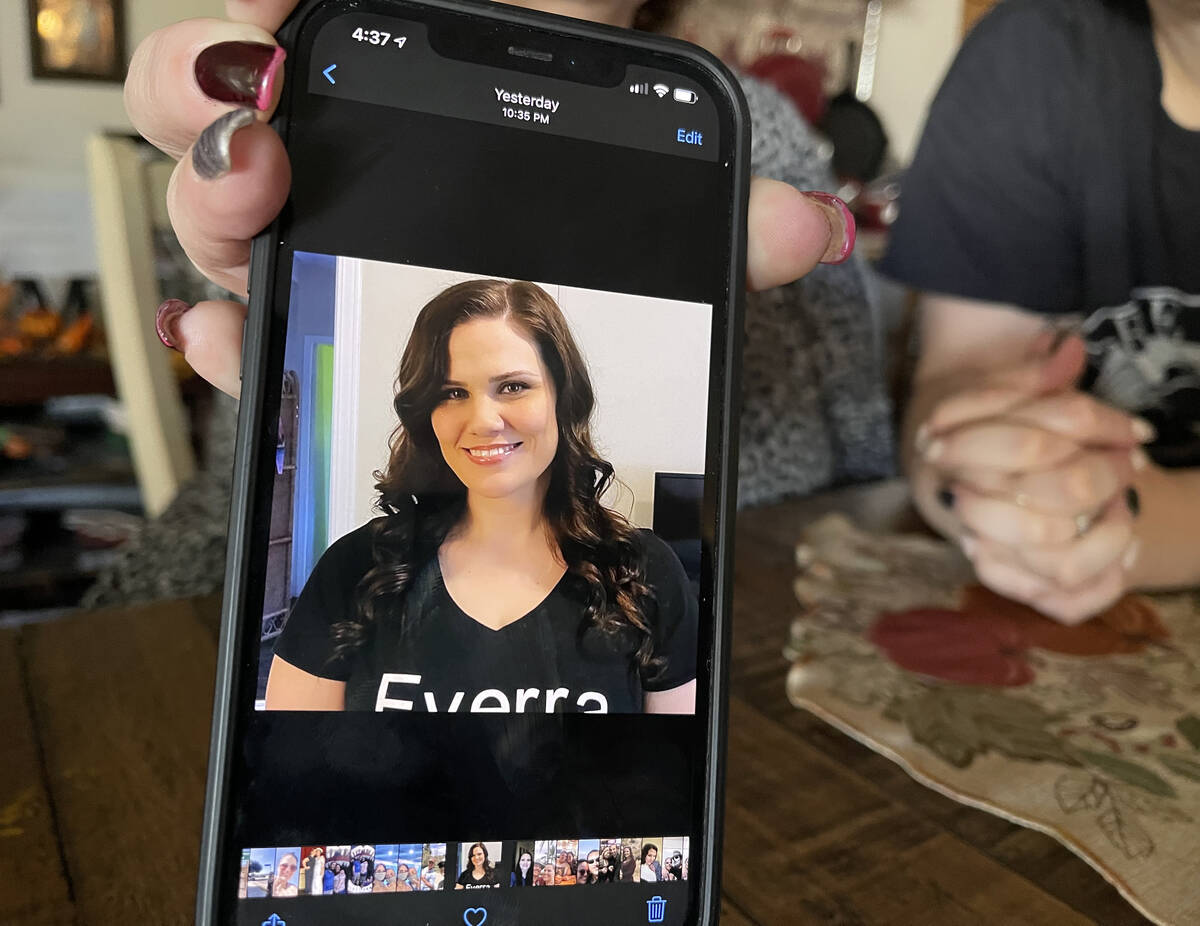 Vena Foster shows a photo at her Henderson home Thursday, Sept. 2, 2021, of her sister Kimmie Pavone who died from COVID-19 shortly after giving birth to a daughter. Pavone's baby was delivered by emergency cesarean section. (K.M. Cannon/Las Vegas Review-Journal) @KMCannonPhoto

Kimmie Pavone died of COVID-19 in early September, two weeks after she was put on a ventilator and her only child was then delivered by emergency cesarean section at a Las Vegas hospital.

“She tried so hard to have that baby, and she never even knew it was born. Never got to hold her,” Vena Foster said about her sister, who was 35.

“And that baby will never know how wonderful her momma was.”

Pavone’s baby girl, Jordyn Rose, was born prematurely at 30 weeks with an underdeveloped lung and bleeding of the brain. She remains in a newborn intensive care unit but is doing well, her aunt said.

Pavone, who had tried to become pregnant for nearly a decade, attempted to do everything right during her pregnancy, Foster said. She did not get vaccinated against COVID-19, believing that getting the shot could increase her chance of a miscarriage.

Jordyn’s father, Mike, couldn’t see his newborn until a week after her birth because of pandemic restrictions, when he had recovered from his own bout of COVID-19. Because of COVID-19 restrictions, he was unable to be at his wife’s side from the time she was admitted to Spring Valley Hospital until he viewed her body at the mortuary on Thursday, Foster said. He would video chat and text with her from his car in the hospital parking lot to be as close to her as he possibly could.

Foster said her sister had wanted a child for some time.

“She was so excited to have a baby. She wanted to be a mom so bad. … She just did everything she was supposed to,” Foster said of her sister, who worked as a phlebotomist in a doctor’s office.

When she tested positive for COVID-19 in early August, Foster wasn’t overly concerned, since her sister was young and healthy.

Last October, more than a dozen members of their large extended family had become ill with COVID-19 after a family get-together, and none had to be hospitalized, including Foster, who is 16 years older than her sister and had undergone open-heart surgery two months earlier. Pavone, born in Utah and the youngest of six siblings, grew up in Boulder City; she had worked as a lab tech at Reflections Healthcare in Pahrump, according to information on social media.

“And the next day, she called me and she could hardly breathe.”

On Aug. 11, the day after Pavone was hospitalized, the Centers for Disease Control and Prevention released new data on the safety of COVID-19 vaccination for pregnant women. Data on nearly 2,500 women who had gotten an mRNA vaccine before the 20th week of pregnancy showed that they had no higher rates of miscarriage than women who were unvaccinated.

Earlier data also had shown no safety risks for women vaccinated late in pregnancy or their babies.

Noting that doctors were seeing increasing numbers of pregnant patients with COVID-19, the CDC encouraged all women to get vaccinated who are pregnant, thinking about becoming pregnant or breastfeeding. The CDC’s advice echoed recent recommendations from top obstetrician groups.

Women who are pregnant are more likely than their non-pregnant counterparts to experience severe illness for reasons that aren’t entirely clear, but that may include reduced lung capacity, increased weight, suppression of the immune system and a higher risk of blood clots, said Dr. Michael Gardner, an obstetrician and vice dean of clinical affairs at UNLV’s Kirk Kerkorian School of Medicine.

If pregnant women are vaccinated, “very, very rarely” do they require hospitalization, he said.

COVID-19 also increases the risk of a pre-term birth, Gardner said, which may result in long-term complications for the baby.

He encouraged doctors and other practitioners treating pregnant women to talk to their patients about vaccination.

“We need to be more proactive, talking to our patients, encouraging our patients to get vaccinated while we try to prevent these kinds of tragedies,” he said.

Gardner’s own pregnant daughter heeded his advice to get vaccinated and delivered a healthy daughter without complications last month.

Foster said she last communicated with her sister the day before Pavone was put on a ventilator.

“She was so scared,” Foster said about the sister she described as always happy and eager to help others.

Pavone had an oxygen mask over her face and was unable to speak but communicated through sign language, which she had been studying. Her signing was interpreted by Foster’s niece.

The last words she signed to her sister were “I love you.”

Foster’s daughter, Malia Matney, has set up a GoFundMe account for Pavone’s widowed husband and the child he will be raising alone. The couple got married three years ago in Hawaii. It was Kimmie’s second marriage; she’d also tried to get pregnant in her first.

The widower plans to sell their home in Pahrump to help make ends meet on one income.

“She was so healthy. She always was healthy. All of us, we were the ones that had health problems. And we survived COVID. … I don’t understand a lot of it,” Foster said through her tears.