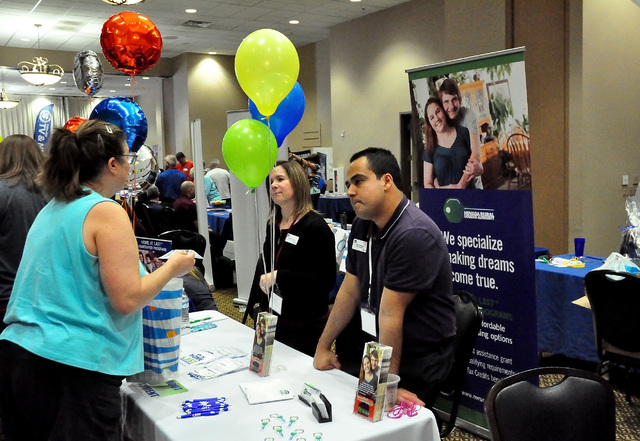 The 18th annual Biz and Home Expo took place over the weekend and was a success, according to the Pahrump Valley Chamber of Commerce.

Taking place Friday and Saturday at the Pahrump Nugget Hotel and Casino, chamber Chief Executive Officer Chris Erwin said that between 800 and 900 people attended the two-day event, checking out the around 60 vendors in attendance.

Businesses that exhibited at the event varied wildly, with everything from medical companies like Mercy Air to a booth promoting Dennis Hof’s area brothels and everything in between.

Erwin explained that the vendors that were at the expo were pleased to be part of the annual gathering.

“There was a lot of positive feedback from all the exhibitors saying that they were able to to get leads and potential sales out of the event, which was the goal,” Erwin said.

This is the first time that Erwin helped run the expo, as he took over as CEO late last year, and despite not having the experience himself, surrounded with chamber staff members that have helped with the event in the past made it a smooth process overall.

“For the most part, the event met our expectations,” he said. “We organize ourselves well at the chamber and I think that allows us to be able to manage multiple projects in an efficient manner.

“There were no real big surprises.”

This year the title of the event changed slightly with the addition of “home” to the Biz Expo, and that was aimed at bringing in business and groups that might have skipped the event in years past.

“I think the home part worked for real estate, home insurance, home-based business,” Erwin said. “Maybe if the home wasn’t there and it was just the business expo maybe they would’ve felt like it didn’t apply to them.”

Erwin explained that it would likely to be up to the chamber’s board of directors if the event keeps the home part in it going forward, but if he has his way it will remain.

Erwin said that event relayed that keeping business in town as much as possible is important and that was shown in the two days.

“Because of the positive response from our vendors that the chamber is doing well and is doing well at marketing its events,” he said. “We’re still trying to get better and improve but I think there is a large percentage in Pahrump that know the importance of keeping it local, doing business with businesses here locally.

“I got that from talking with attendees and exhibitors and we’re going to keep trying to make it better.”