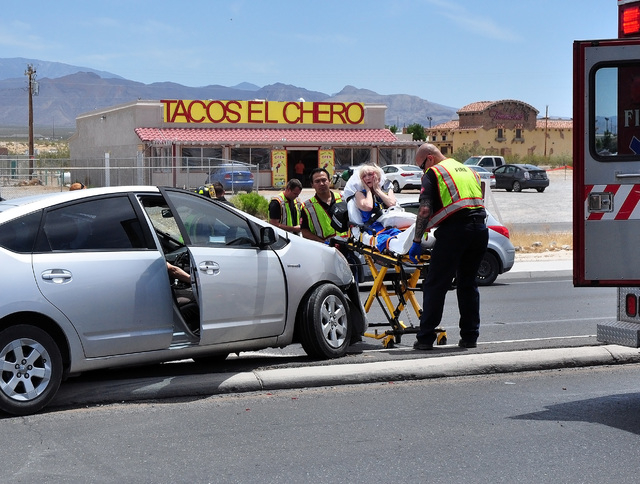 A woman was transported to Desert View Hospital following a two-vehicle collision along Highway 160 behind the Panda Express restaurant late Wednesday morning.

A local couple, who chose to remain anonymous, said they were traveling southbound on Highway 160 when a late-model blue Toyota sedan became airborne from the driveway between Panda Express and Denny’s.

They walked away from the crash unscathed.

“This car came over the curb and into the air,” said the driver of the silver Toyota Prius. “I couldn’t stop and I t-boned her. The car bounced once and when I hit it, it was in the air, the rear end was in the air. It all happened so quickly, it was over before I could even say anything. It’s kind of odd because we were just getting ready to trade the car off for another one. All the more reason now.”

NHP Trooper Kevin McNeal said the investigation revealed that the woman’s car also side-swiped an SUV at the drive-thru window at Panda Express.

He noted the woman said her car experienced a mechanical problem just before she lost control.

“She indicated there was a problem with her accelerator pedal,” he said. “She went over the curb and struck the white SUV at the drive-thru window of Panda Express. She then plowed through the bushes and entered State Route 160 where she struck the front of the Prius. She was transported for neck and back injuries to Desert View Hospital.”

“The woman said her throttle got stuck,” the driver of the Prius said. “I just saw a car flying in front of me and I slammed on my brakes.”