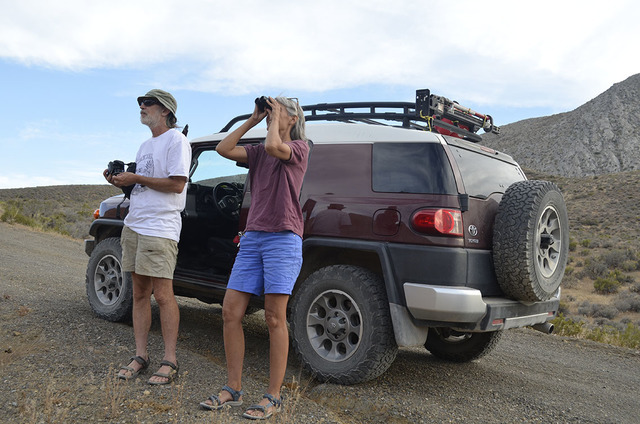 Laura Cunningham and Kevin Emmerich, founders of Basin and Range Watch, a Beatty, Nevada-based non-profit dedicated to conservation of the deserts in Nevada and California observe a possible nesting place of a Golden Eagle on one of the mountains' cliffs. Daria Sokolova/Pahrump Valley Times

Editors Note: This is the second part of a two-part article, the first of which ran in Wednesdays edition.

Nye County Commissioner Lorinda Wichman said county officials consider impacts on wildlife when approving solar projects, however the main responsibility for the study of impacts on the habitat remains with the Bureau of Land Management and U.S. Fish and Wildlife Service.

The recommendations or restrictions by those two agencies limit Nye Countys need to study the habitat impacts, she said.

Wichman also said Nye County makes sure developers consult with the closest community when they construct the project and the communitys recommendation is a high priority.

The project does not infringe on prime habitat for desert tortoise or other endangered species in the area, she said. Furthermore, the project will be installing desert tortoise fencing around the site and will be timing construction activities in order to minimize impacts on the burrowing owl during its breeding season.

Michael Burroughs, senior wildlife biologist at the U.S. Fish and Wildlife Service, said the agency encourages the solar energy developer to construct its projects in degraded areas or areas with the least impact to wildlife and important resources.

Burroughs, however, said its outside of the services authority to require specific locations for utility projects.

We work with the BLM to remove important habitats from consideration for large-scale solar projects and have been successful (in) doing so for critical habitats and important conservation areas for the desert tortoise, he said. The solar industry favors areas that already have transmission capabilities nearby, which may make certain sites undesirable.

The U.S. Fish and Wildlife Service is mostly concerned about potential effects that First Solars 745-acre project in Amargosa Valley may have on the endangered Yuma clapper rail and other migratory birds, Burroughs said.

Abram, however, said that environmental and biological surveys of the Sunshine Valley site provided no evidence of Yuma clapper rail presence and no indication that habitat suitable for the species such as marshes, wetlands, or similar water features are present at the site.

The project will also not create any wetland habitats or ephermal pools, and will enclose all on-site water storage so as not to attract any Yuma clapper rail, Abram said.

The project was sited to avoid being located between the refuge and suitable habitat within rail dispersal distance of the refuge, officials said.

Laura Cunningham, a Berkeley-area native, has had a number of jobs throughout Mojave Desert where her main focus was biology and species study.

But it wasnt until she took a position as a contract tortoise biologist translocationg tortoises and monitoring large-scale development projects in the California desert that she saw the impact of such big projects on tortoises habitats.

Many of those tortoises died from exposure to the heat or fell prey to other desert animals, she said.

Since I had that firsthand experience of watching bulldozers and huge graders scrape up these living desert ecosystems, I thought, theres got to be a better way than this, said Cunningham, co-founder of Basin and Range Watch, a nonprofit dedicated to conservation of the deserts in Nevada and California.

Burroughs said locally, solar projects near Primm had several negative impacts on desert tortoise, including loss of its habitat and loss of individual tortoises that may have been missed during clearance surveys, particularly small tortoises. The projects also increased habitat fragmentation by impacting areas that provide connections among populations in Nevada and California.

In addition to effects to the tortoise, there are migratory bird mortalities when they collide with project features and infrastructure, Burroughs said.

Valley Electric Association, a Pahrump-based utility cooperative, is currently working on a 15-megawatt community solar project in the northern part of Pahrump. The company will construct 54,000 photovoltaic panels across an 80-acre project site.

Along with the U.S. Fish and Wildlife Service, VEA and the projects developer, Bombard Renewable Energy, implemented a plan to protect the threatened species that may be affected by the Community Solar Project, specifically the desert tortoise.

VEA performed tortoise surveys prior to any work being performed on the site, said Chris Tomchuk, executive vice president of engineering and operations at VEA. VEA hired an authorized biologist to locate and move the tortoises found on the site to a habitat area specifically constructed for the tortoises on a nearby property.

VEA and its partner also utilized alternative construction and design methods to minimize the impact to the desert tortoise habitat on the site. Instead of mowing and crushing the vegetation on site, the company did blading and grading. Officials also selected pier locations to avoid known tortoise burrows and washes on the site.

Additionally, the photovoltaic panel height was increased from current industry standards to encourage plant growth under the panels and thereby provide food sources for the tortoises.

The distance between panel rows was modified on half of the site to minimize the appearance of a body of water which might attract birds, officials said.

Tomchuk said the changes are part of the research that is being done on the site to determine the impact of the modified design and construction on the environment, wildlife, and their habitat.

The electrical design and construction were modified so that ongoing maintenance activity would be limited to the center of the site, he said. The solar site fence design incorporated tortoise access points to allow them to freely enter and exit the site. VEA will be working with research partners to determine the impacts of these modifications on the environment and the habitat.

Cunningham and Basin and Range Watch co-founder Kevin Emmerich meanwhile want to continue educating local residents on some of the impacts of solar projects in the desert and make sure that local people have a say in a conversation with developers and government agencies.

Often, local people in the desert get shut out of these processes of planning between developers and agencies and government, so we are trying to bring the public to have a bigger say in this too, Cunningham said.