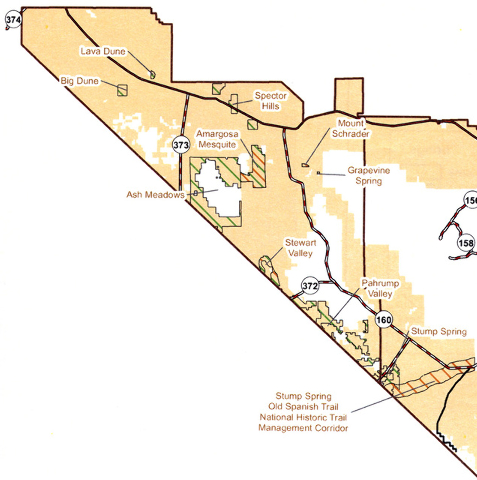 The U.S. Bureau of Land Management revised resource management plan for 3.1 million acres of public land that has already been criticized for creating 20 more Areas of Critical Environmental Concern, will be discussed during public hearings tomorrow.

The plan is a guide for how to manage public lands over the next 20 years for a V-shaped area that includes Nye County as far north as Beatty, down to Laughlin, then up to Mesquite.

Nye County Commissioners have been communicating on an inter-agency basis with the BLM on the plan, which has been on a confidential basis until the release of the draft plan. The county commission hasn’t prepared an official written response, but the comment period doesn’t close until Jan. 7, 2015.

“There’s a lot of things that have a lot of impact on the Pahrump area, especially the ACECs and some of the other restrictions they’re putting on land use.” Nye County Planning Director Darrell Lacy said.

The new sites around Pahrump suggested in alternative 3 include:

• 20,903 acres on the southwest side of Pahrump Valley for mesquite acacia woodlands and neo-tropical migratory bird habitat;

• Three parcels totaling 5,420 acres called the Specter Hills, astride Highway 95 between Lathrop Wells and Pahrump Junction, for the white-margined penstemon;

• 647 acres to protect cultural and historical values at Stump Spring, near Highway 160 and the Tecopa turnoff;

• 437 acres at Lava Dune, near Big Dune, to protect the beetles;

• 283 acres to protect cultural and historical values on Mount Schrader near Grapevine Spring.

A category called visual resource management he said, “is the spirit of John Muir gone mad. Professional management for sustainable multiple use is replaced by what’s pretty.”

The search for more land with wilderness characteristics continues, he said.

“The land area of our nation has not expanded. Therefore any reasonable person would question the need for special protection of wilderness characteristics. Trails I rode for decades were closed when areas were designated as wilderness,” Adams aid.

The area designated as Areas of Environmental Concern doubles, Adams said, some were areas set aside for recreation including Muddy Mountain in eastern Clark County which was used for off-highway, high speed competition in the 1998 plan. The revised plan also doesn’t address access to back country and destination routes for trail riders, he said.

Alternative 3 would designate 230,372 acres as Class I visual resource management destined for preservation. Another 948,521 acres would be designated as Class II, retention of the landscape character, which includes areas around Highway 160 around the Tecopa Road, a one mile buffer around the Old Spanish Trail, and areas in Amargosa Valley. Class III visual resource management, partial retention of the landscape character, is recommended for 848,909 acres, including areas east of Pahrump Valley.

When it comes to recreation, the plan would designate 256,540 acres in Pahrump as an extensive recreational management area, and 346,681 acres in Amargosa Valley, where travel would be limited to existing roads, trails and dry washes until a travel management plan is completed. The Big Dune special recreation area would be expanded from 11,473 ares to 98,031 acres.

The plan proposes offering 16 sites totaling 42,513 acres of public land in the Pahrump Field Office for disposal. They include 25,863 acres in Amargosa Valley, 5,628 acres in Lathrop Wells, 3,515 acres in Pahrump, 355 acres called the Bell Vista disposal area and 191 acres in the Last Chance Range.