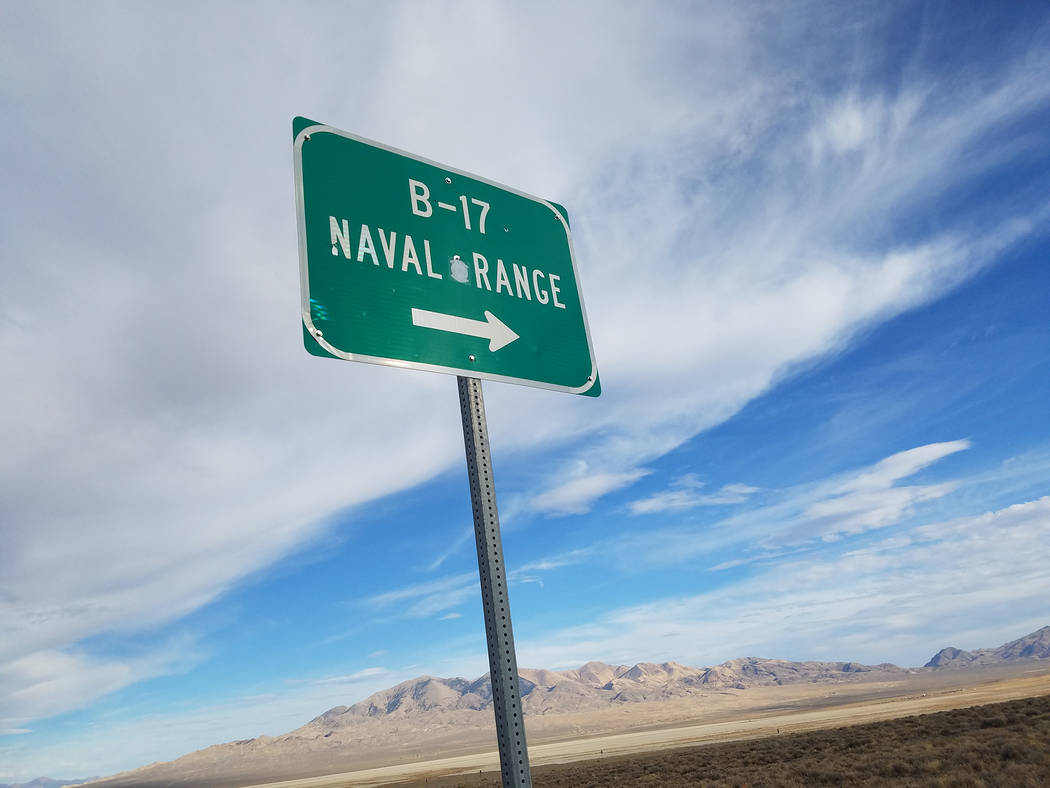 David Jacobs/Pahrump Valley Times A part of the Navy's Fallon Range Training Complex as shown in this Oct. 10, 2016 photo along U.S. Highway 50 between Fallon and Gabbs. 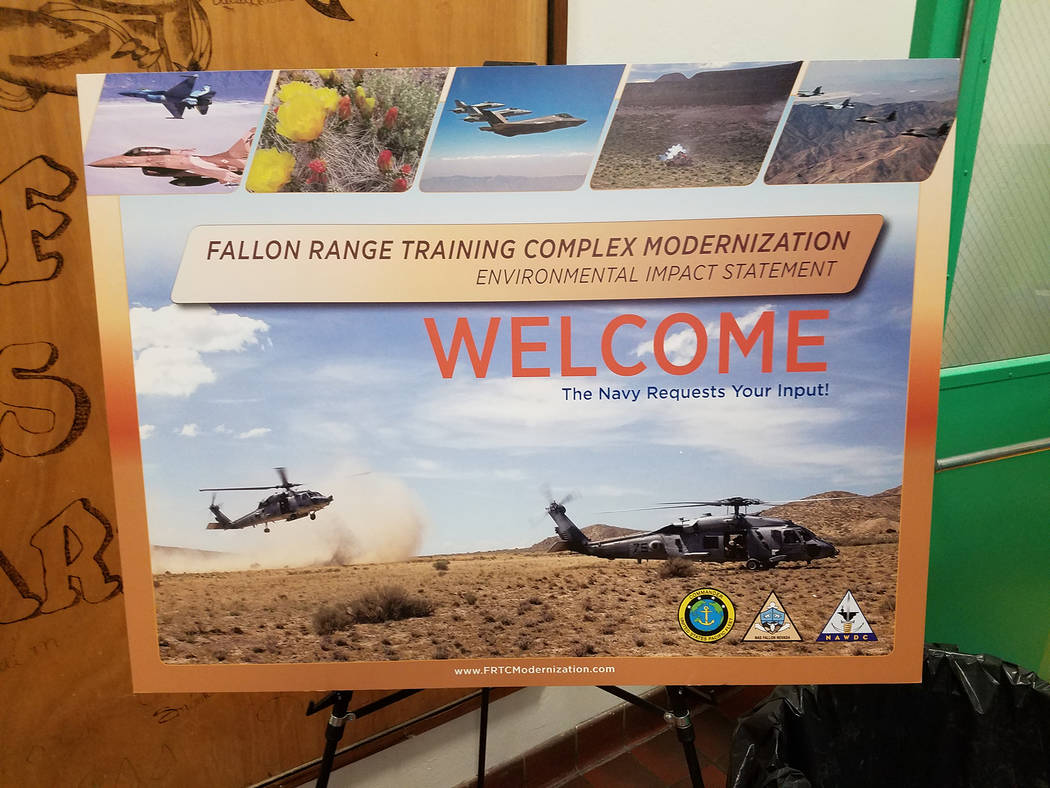 An informational graphic is displayed in Gabbs on Oct. 7, 2016 for a public meeting on the proposed expansion of the Navy’s Fallon Range Training Complex, which would include Nye County. As part of the proposal at the tinmel, the Navy seeks to add 604,789 acres of additional public land and acquire 65,160 acres of non-federal land for training. 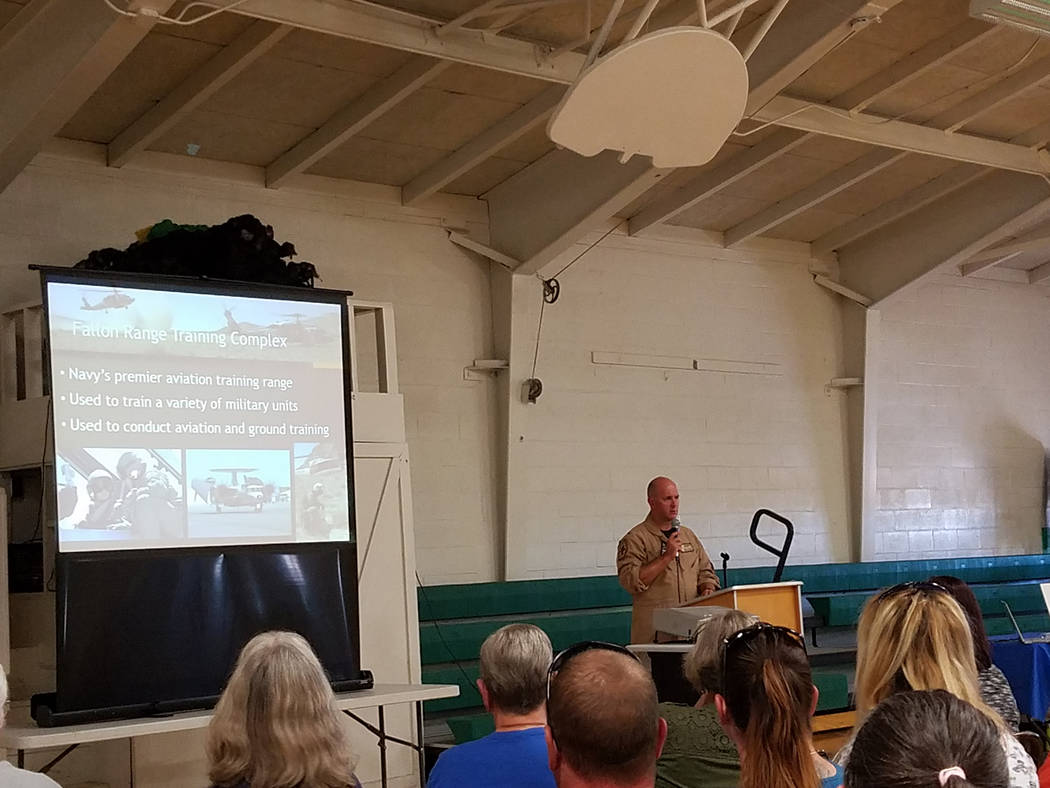 Capt. David Halloran, the commanding officer of Naval Air Station Fallon, speaks to a crowd in Gabbs on Oct. 7, 2016. A public meeting was held there on the proposed expansion of the Navy's Fallon Range Training Complex, which would include Nye County. David Jacobs/Times-Bonanza & Goldfield News 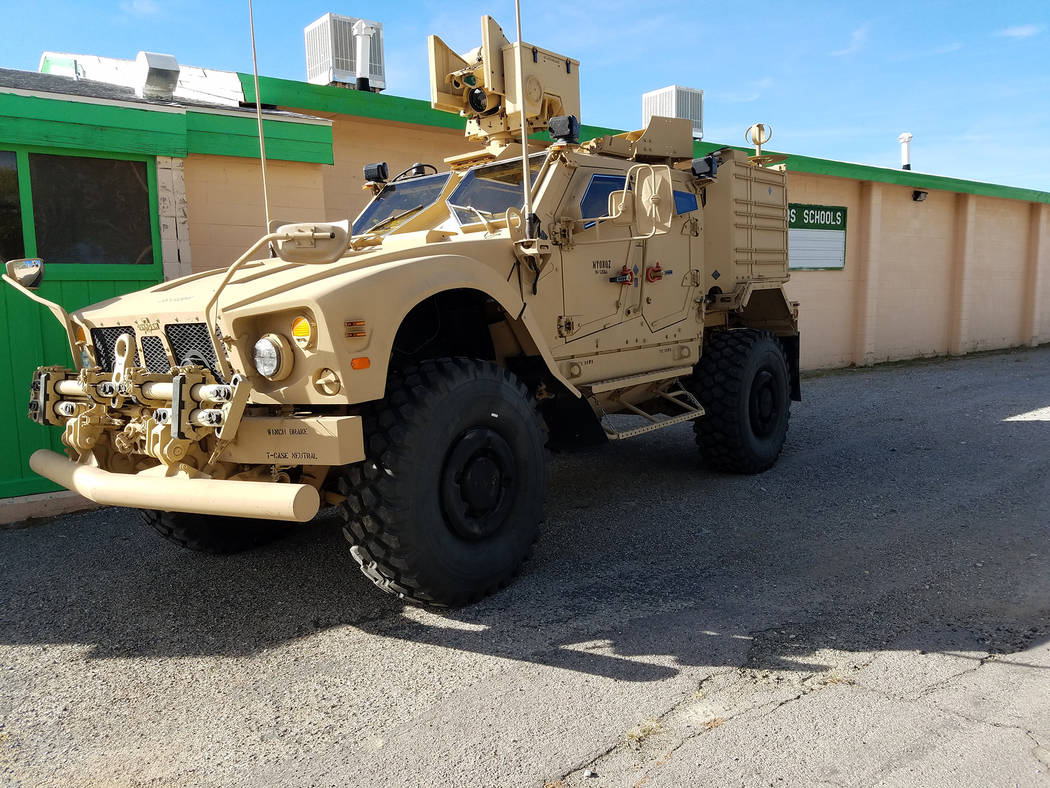 David Jacobs/Pahrump Valley Times A Navy vehicle used by the SEALs arrived in the Nye County community of Gabbs on Oct. 7, 10`6 ahead of a public meeting on proposed expansion of Naval Air Station Fallon's training complex. The MRAP (mine resistant ambush protected vehicle) is based at Fallon. It was brought to Gabbs for a public meeting on the proposed expansion of the training facility.

Feds have withdrawn a total of 694,838.84 acres of public land in Churchill, Lyon, Mineral, Nye, and Pershing counties, from all forms of appropriation under the public land laws, including mining, mineral and geothermal development, for “land management evaluation purposes,” according to the BLM news release on Aug. 31.

In addition, 68,809.44 acres of federal land in the Dixie Valley area in Churchill County were withdrawn from the mineral leasing laws.

Ed Rybald, the NAS Fallon strategic planner, said that newer-generation aircraft and weapons have outpaced the current capabilities of the Fallon Ranges, as training is hindered by inadequate land and airspace, leaving aircrews unable to train as they would fight in the real world.

“This modernization supports President Trump’s National Security Strategy to renew military capabilities by improving lethality through readiness. However, the proposed action was initiated in late 2015 prior to the 2016 national election,” Rybald said in an email.

The proposed modernization would provide the training capabilities needed to meet changing aviation and ground training requirements, while maintaining the safety of local communities, Rybald said. The expanded ranges and associated airspace would better prepare U.S. maritime forces for conflict if hostile actions were required, he added.

Colleen Dingman, project manager at BLM Carson City District, said that the withdrawal means that the land is closed to all new mineral claims and development including locatable, leasable and fluid minerals for the four-year period. All other public lands uses including recreation, grazing, rockhounding and casual use are unaffected by the withdrawal.

“The federal land is withdrawn from all forms of appropriation under the public land laws, including location and entry under the United States mining laws, and leasing under the mineral and geothermal leasing laws, for land management evaluation purposes, to maintain the current environmental baseline, subject to valid existing rights for up to four years,” Dingman said.

The Navy, meanwhile, is preparing an Environmental Impact Statement to identify and assess the potential environmental impacts of modernizing the Fallon ranges.

“Several resources areas are being studied and evaluated, including the extent to which certain public land uses may be impacted by the proposed action in terms of being closed to potential exploration and development or remaining open to such activities, such as mining and geothermal development, and other areas such as livestock grazing, air quality, and cultural resources,” Rybald said.

The process began when the Navy collected public comment from Aug. 26, 2016, through Dec. 12, 2016. Rybald said that the public, as well as agencies, local governments, and tribes provided valuable input on potential alternatives and environmental impacts for the Navy to consider.

“The Navy has carefully considered these comments, which have helped to shape viable alternatives for analysis in the EIS. Since the public scoping period, the Navy has been meeting federal, state, and local government as well as tribal stakeholders on a quarterly basis to draw upon the knowledge of local area subject matter experts,” Rybald said.

The next step will be the release of the Draft EIS which will be available for public review and comment. During that period, the Navy will hold public meetings in local communities. All substantive comments on the Draft EIS will be considered in developing the Final EIS and the ultimate Record of Decision, Rybald said.

The Navy originally sought 604,789 acres of public land for military use to expand the current range. In addition, it wanted to renew its existing withdrawal for 202,859 acres.

The military public land withdrawals are approved through congressional legislation. The existing withdrawal which expires Nov. 5, 2021, was authorized by Congress under the Military Lands Withdrawal Act of 1999 and National Defense Authorization Act for Fiscal Year 2000.

The Navy has applied to BLM to renew this public land withdrawal for continued use for a period of 25 years.

Meanwhile, the proposed withdrawal of 694,838.84 acres is expected to be completed in November 2020. Public Land Order 7873 will expire on Aug. 30, 2022 unless the Secretary of the Interior determines that the withdrawal should be extended, Dingman said.

The top concern listed by Nye County was an adverse impact on jobs and tax revenue for Nye County because of the continued restriction on access or use of public lands.

Basin and Range Watch, an environmental nonprofit group that works to conserve the deserts in Nevada and California, also voiced concerns about the proposed expansion.

Kevin Emmerich, a co-founder of the Basin and Range Watch, said that the proposed expansion would damage sensitive resources and close off access to a very large chunk of public lands.

“Increased bombing and overflights would impact sensitive wildlife resources, wetlands and archaeology sites,” Emmerich said. “Habitat for pronghorn and sage grouse would be damaged and the animals may be killed directly. Toxic residue from bombs could contaminate water resources as well. This expansion is just too large.”

“However, current aircraft and weapons technologies require a far greater amount of training space than previous technologies required. … The boundaries of the Fallon ranges have not changed to accommodate for the capabilities of modern weapons. Modern weapons can reach targets at greater distances than ever before, but current range boundaries limit this type of training. Expanding the range boundaries would allow military personnel to train in a realistic, and in some instances 360-degree, combat scenario,” Rybald said.

He also said that the FRTC ranges are designed for air-to-ground weapons training, which includes a variety of weapons systems including Joint Direct Attack Munitions, a kit that converts unguided bombs into precision-guided smart munitions.

When asked about how the Navy plans to address the concerns or reimburse the county for potential economic losses, Rybald said that the draft EIS, which will be released in November, will include a “detailed analysis of the potential impacts to land uses such as mining, recreation, geothermal, oil and gas, and water resources from the proposed action and alternatives.”

“The EIS also analyzes the economic impact of the proposed action. Where possible, while meeting the Navy’s requirements and consistent with applicable legal authorities, the EIS will identify potential mitigation measures,” Rybald said. More information about the process can be found at frtcmodernization.com