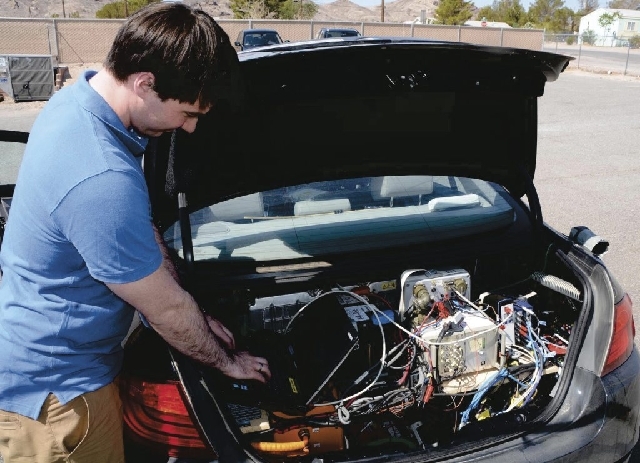 BEATTY — It happens every year. Residents and visitors to the Beatty area start seeing a lot of identical cars, some covered with strange squiggly patterns (to frustrate automotive paparazzi), and for a few weeks every summer Beatty becomes sort of a little Germany.

Test drivers and engineers from BMW and Mercedes Benz have been coming to Beatty every summer for some 30 years to test their cars in the heat of Death Valley.

Some of the cars are stock models already in production. Others are prototypes of new models.

Why do they do it?

As one Mercedes engineer put it, talking about the road between Beatty and the bottom of Death Valley, “We can’t duplicate that grade over that distance in that heat anywhere in the world.”

That makes that particular road a great place to test brakes and cooling systems, but these auto makers are testing much more, and it is part of a larger U.S. road testing program.

BMW engineer Max Braun says that they have to justify the overseas trip to company executives every year. The argument is that test track facilities are continually improving, and testing on a track back home would save a lot of money, including the nearly $1 million cost of shipping the cars and equipment. As one BMW representative put it, “If you want to make a premium car, you have to spend some money.”

However, although tests conducted on a test track can answer the questions they are designed to answer, they do not reveal issues that can arise in real-world driving situations.

Braun says that company executives understand the need for the road tests once they have visited and driven in the locations and under the conditions faced here.

The landscape and driving conditions in Europe are so different from those in the U.S. that manufacturers build some mechanical differences into the cars intended for the different markets. BMW, for instance, does not test cars for the European market here. That is done in Granada, Spain.

You would think that the test drivers would be pushing the cars to their limits, racing down the highway as fast as possible, but that is not the case. What they want to test is how the cars perform when driven as as actual owners would use them.

As an example, Braun says that “people in Death Valley will stop and leave their cars idling with their air conditioners running, which increases the idle speed while they walk around taking pictures.”

This is one of the things that the test drivers simulate.

He says that temperatures in the engine and fuel system will rise for a time when the engine is turned off after getting hot, then there is the chance of bubbles forming in the fuel resulting in what’s called vapor lock. That is another thing they test for in the heat of Death Valley.

In fact, the only thing they do not test the cars for in the U.S. is high-speed driving. This they do in South Africa on a special 68-mile road where they can drive up to 155 miles per hour.

To do so, they purchase a permit, and are given bumper stickers that say “Government Authorized Highspeed Safety Test.” They do this in February, which is the height of summer down there.

Braun says the landscape in America is very different from that of Europe. One thing we have a lot more of here is long open stretches of highway and rather sudden extreme changes in altitude.

Beatty is not the only place they come to for these tests. The BMW Group (which also includes Mini and Rolls-Royce), also go to Las Vegas, Bishop, Los Angeles, San Francisco, and Denver.

Bishop offers a long high-altitude grade; San Francisco has all those famous hilly streets; and Denver is good for extreme high-altitude tests.

Las Vegas and Los Angeles provide the congested city traffic experience. Test drivers in Las Vegas, for instance, do what most of us try our best to avoid — follow along behind a city bus on the Strip, in the wake of its hot exhaust.

The German auto makers are not the only ones to come and test in the Beatty area. Honda, Kia, and others also do so.

The other companies have either built their own shop facilities or rent space from individuals, but the Germans, who have been doing it the longest, use the middle school and high school shops, which are otherwise idle in the summer, and the partnership has proven beneficial to the schools.