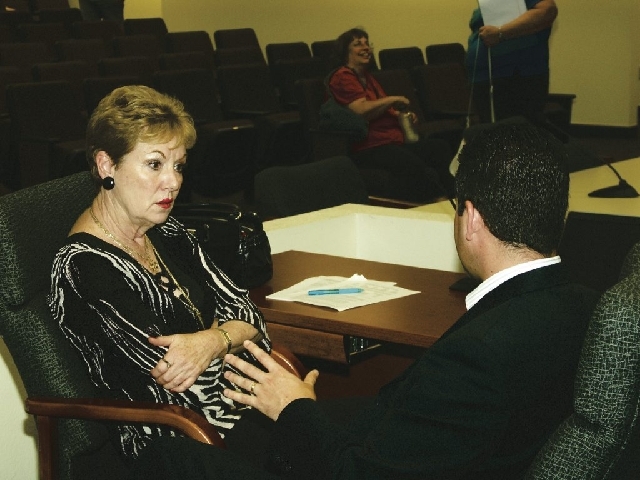 Tuesday’s Pahrump Town Board meeting set an unofficial record as being the shortest regular meeting of the year so far.

Board members had only one major agenda item to deal with as they voted to approve the interim contract for newly hired Town Manager Susan Holecheck.

Dr. Tom Waters was absent due to a previously scheduled event.

Prior to the vote only one person provided public comment on the matter.

Dave Stephens, a regular attendee of town board meetings, summed up his thoughts on Holecheck’s employment.

“I only got one thing to say about Susan Holecheck. She’s much better looking than that other jackass we had here,” he said to a roar of laughter from the audience.

Holecheck, who has already secured a temporary residence in Pahrump, reported to work on Wednesday.

She said she already had a number of meetings lined up this week.

“I really want to jump and get both feet wet. I’m not just going to stick my toes in. I’m really, really looking forward to it. I’ve been here since Sunday but for the first few days, I kind of stayed away until the contract was approved but now I can get going and see what we can get done. I want to find out where we are budget-wise. I want to look at revenues and understand the fairground situation and how we are moving ahead with that,” she said.

The new town manager said she is really studying what actions have been taken by the board in years past in regards to the community’s best interest.

“I’m kind of a book work type person and I want to look at some of the old ordinances and make sure they are up to date. Maybe bring things to the town board and make sure that we are current on policies,” she said.

While away from her office, Holecheck said she is getting reacquainted with the Pahrump community with which she has had longtime ties to over the years.

“I truly like it here. I was out last week at Denny’s and a few other places and I met a lot of nice people. I’ve been here last year and the year before. When I lived in Mesquite, I would come out here a couple of times a year. I was here for the League of Women Voters convention a few months ago because I got elected second vice president for the state. I do have to say that my first order of business was going to the chamber of commerce to get a map,” she said with a chuckle.

Holecheck’s contract outlined her job description and stated that the annual base salary would start at $55,000 or $27,500 for the first six months of work.

“That $55,000 figure would just be for the length of that particular interim contract and once it’s renegotiated, naturally she could ask for more. I would assume that she would, but whether she gets it or not or even gets a renewed contract would be based on the satisfaction of the board and staff. It’s important to understand that Bill (Kohbarger) also had an awful lot of education and certificates for being a previous town manager,” he said.

Kulkin also noted that during Kohbarger’s tenure, the town manager never got a raise.

“He never took a raise the whole time he was on the job. He turned them all down even though he was offered because he just felt that it wasn’t right based on the fact that no one else got a raise working for the town other than the firefighters, but that’s another story. Bill had a lot more qualifications, but Susan has a great background and experience and she has six months to show her worth to the community,” he said.

One board member seemed to have a difference of opinion on Holecheck.

Even though Amy Riches did lend her support to Holecheck’s contract approval, she has long championed former Town Manager Dave Richards as the best choice for the position.

Riches said she was not quite sure of what to make of the new town manager’s salary.

“Kohbarger was getting over $100,000 a year so I was a little surprised that it was not the same amount of money. In fact, I don’t even know who negotiated the contract. You have to understand that I have never seen anything like this because I have never been on a town board before, so I didn’t really understand why. I thought that the amount was kind of odd but it is up to her and she is the one who accepted it,” she said.

Riches also questioned the reasoning behind a consent agenda item that would allow Kohbarger to still have access to the town’s email account and mobile phone privileges.

The board recently voted to retain Kohbarger’s expertise for the Pahrump Airport project which he has continued to work on during his time as town manager.

“Most people when they resign a job, they give a 30-day notice and then they write notes about what they were working on. I have to be honest, I don’t care if we have an airport or not. I’m not that gung-ho on the airport. It’s like he wants a little more and a little more and that really bothers me. You have to remember that this is not our money; it’s the people’s money. I understand that the FAA gets a hold of him on that phone but I’m sure he can call everyone and give them another phone number. That is just my opinion,” she said.

Following a brief discussion, the board eventually voted 3-1 to extend Kohbarger’s access to the town’s email account and mobile phone only for town-related activities.

As expected Riches expressed her dissatisfaction by providing the lone “nay” vote on the item.