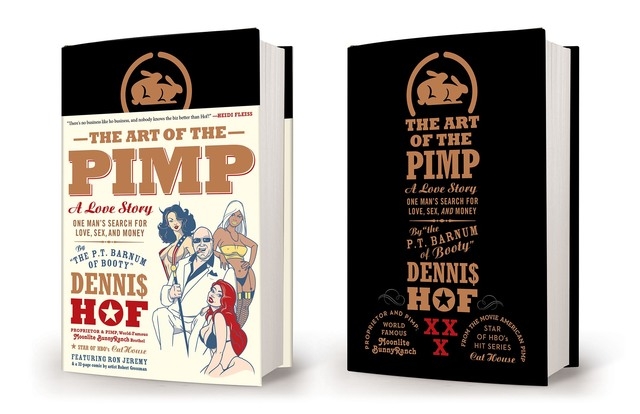 Dennis Hof is the most successful and best-known brothel owner in Nevada history.

He currently owns seven brothels in Nevada, including three in Nye County: the Area 51 Alien Cathouse on Highway 95 in Amargosa Valley, Love Ranch Vegas at Crystal off Highway 160 north of Pahrump, and another in Crystal that will include a museum scheduled to open next year.

The Moonlite BunnyRanch, located outside Carson City in Lyon County, was the first brothel Hof purchased and remains the crown jewel of his efforts. His life operating the BunnyRanch is the focus of his autobiography, “The Art of the Pimp: A Love Story – One Man’s Search for Love, Sex, and Money” released Tuesday.

His brothels are a new take on an old profession. As he says, “This ain’t your daddy’s old brothel.” It represents a “new breed of whorehouses, with a new breed of owner.”

Three Books in One

Dennis Hof’s autobiography is nearly 350 pages long and written in a style that makes easy reading; it’s engaging and flows well. The pages are filled with details concerning life in a highly successful modern legal brothel.

Though Hof’s newly published volume is the story of his life, in a way it is three books in one, well blended together. The first is an account of his life, focusing mainly on the years since 1992, when he purchased the BunnyRanch. Much of this aspect of the book centers on his deeply felt romantic relationships, mostly with women who worked for him at his brothel.

With his apparently high levels of testosterone, none of these affairs endured, much to his pain and disappointment. All of this has the feel of a “true romance” novel.

The second aspect of Hof’s book consists of descriptions of life and times at the BunnyRanch over the years. Here we learn something of the social dynamics in a brothel, how the women interact with each other, their conflicts, how they cooperate, and brothel rules by which all present must live. We learn about the very substantial money some women can make at the BunnyRanch. These are among the best accounts of what life is like in a big-time legitimate brothel, or any other brothel, for that matter, that I have read. They are good first-hand accounts of human beings living and working in an exotic environment.

The third element of Hof’s book, one I don’t recall seeing previously in an autobiography, involves subsections within chapters prepared by some of the people Hof has written about. These are alternate perspectives that provide a different view on Hof’s take on things, giving the reader a deeper understanding of what happened and why.

This becomes especially interesting when, for example, a woman with whom Hof has been deeply involved romantically gives her view of the affair and how it ended alongside Hof’s account. This method takes on a special dimension when a 13-page professional psychological evaluation of Denis Hof is presented at the end of the book, discussing both his strengths and weaknesses. How many from any profession would be willing to do that?

Dennis Hof was born in Phoenix, Arizona, in 1946. He had a paper route and worked at a Dairy Queen and gas station while growing up there. He attended Catholic church every Sunday and had a shotgun marriage at 18. He got a job at a gas station, putting in 50 or 60 hours per week. Pretty soon, he owned his own gas station, and by 1971 was running five stations.

When his maternal grandfather died, his mother told Hof to go to his grandfather’s room and take a “little memento.” Amazingly, from all the possibilities he chose Dale Carnegie’s book, “How to Stop Worrying and Start Living,” and read it. He then took a course on Dale Carnegie’s methods. Carnegie, of course, was a widely known advisor on how to be successful, and his methods seem to have played an important role in Hof’s future business ventures.

Hof vacationed at Lake Tahoe and fell in love with the Reno area. He sold his businesses in Phoenix and bought a gas station in Reno. By 1980, he had five. He got into real estate and was very successful.

As he says, he was living large.

In 1992, he purchased the Moonlight Ranch brothel in Lyon County for $1 million. He immediately changed its name to Dennis Hof’s World Famous Moonlite BunnyRanch. By 1997, he writes, the BunnyRanch was becoming “the go-to brothel in Nevada.”

Prior to Hof’s entry into the brothel business in Nevada, owners kept a low profile; they did not seek the limelight. As his book makes clear, Hof has done just the opposite. He has been, and remains, a publicity hound, never missing an opportunity to promote himself and his brothels. And there is no argument about his being very good at it. This, along with his keen business sense, has played a major role in his great success in the brothel industry.

Dennis Hof has been written up in the New Yorker, hung out with celebrities, and been interviewed by national media figures such as Howard Stern and Diane Sawyer. There have been adventures at the Playboy Mansion and a very popular series for HBO, “Cathouse,” which put Hof and the BunnyRanch on the world stage.

As one writer in his book suggests, he has become the P. T. Barnum of sex.

Hof tells of his affair with infamous Hollywood Madam Heidi Fleiss, who by then was out of prison and living in Pahrump. The two considered becoming business partners, but didn’t.

It was she, Hof says, who “talked me into going to southern Nevada, where I bought two other brothels.” Of their affair he says, “The Hollywood Madam and the Cathouse King, a marriage made in heaven. Or Hell!”

Dennis Hof’s “The Art of the Pimp” is not only entertaining but also represents an important contribution to our understanding of Nevada’s social history and the evolution of our culture’s changing attitudes toward romantic love and sex.

Bob McCracken has a doctorate in cultural anthropology and is the author of numerous books in the Nye County Town History Project, and the ongoing brothel history series in the Times.