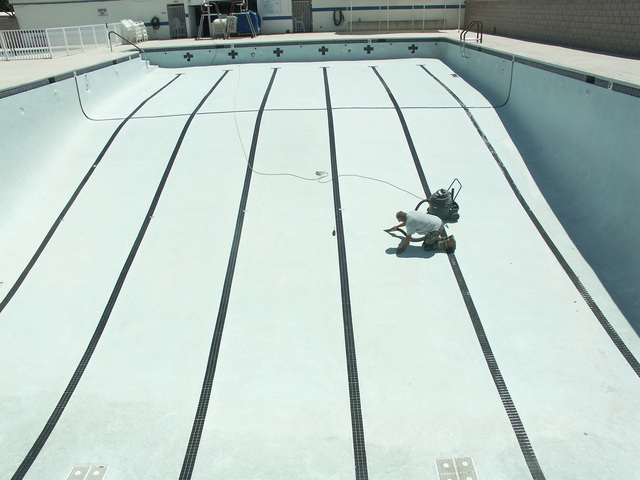 An act of vandalism has forced the closure of the town pool this week.

Town Buildings and Grounds Supervisor Matt Luis said someone threw glass bottles over the pool’s fenced enclosure where shards of glass were strewn about the entire deck as well as in the pool itself.

Luis said though the act was discovered early Saturday morning, town crews have spent the entire week cleaning up bits and pieces of glass, which could cause injuries to bathers.

He noted that all of the water had to be drained from the pool before work could proceed.

“We tried vacuuming it but we didn’t feel comfortable with that so this entire week we are in the process to rectify the situation,” he said. “We had to drain two hundred thousand gallons of water, which is very expensive and before you can empty the pool we have to neutralize the chlorine zero level before you can disperse that water.”

Luis also said once the pool is inspected following the cleanup, it will take additional time to refill it while balancing the chemical levels.

“We got it all pumped down and they’re cleaning it all out as we speak,” he said. “It will take another day and a half to fill the pool back up with two hundred thousand gallons of water and it will also take a little time to balance the chemical levels in the pool.”

With much of the work occurring earlier this week, Luis said he’s hopeful the pool will be ready to accept bathers sometime tomorrow.

He also said many of the regular users of the pool were obviously upset over the whole ordeal.

“Right now we are shooting for Saturday to reopen the pool. We started pumping the water out first thing on Sunday morning,” he said. “The families I have spoken to are taking this whole thing very hard, but we are very confident because our pool guy, Jimmy Martinez, is a real pro. He takes the pool responsibilities very seriously because that’s his baby.

Luis also said the individual who threw the glass bottles over the fence has created additional problems for those who earn extra income over the summer.

“Not only does this affect the individuals and families who enjoy the community pool, it also affects the employees, including all of the lifeguards who are mostly all teenage school kids and this is a huge impact for them over the summer,” he said.

Luis also urges anyone who may have witnessed the vandalism last weekend to contact local authorities.

“There’s really nothing to do to avoid this kind of thing because it’s as easy as heaving a bottle over the gate,” he said.

It’s the second time in as many weeks the pool was forced to close due to safety and health concerns.

Last weekend the town closed the pool after at least one bather defecated in the water.

The pool was down for roughly a day and a half.