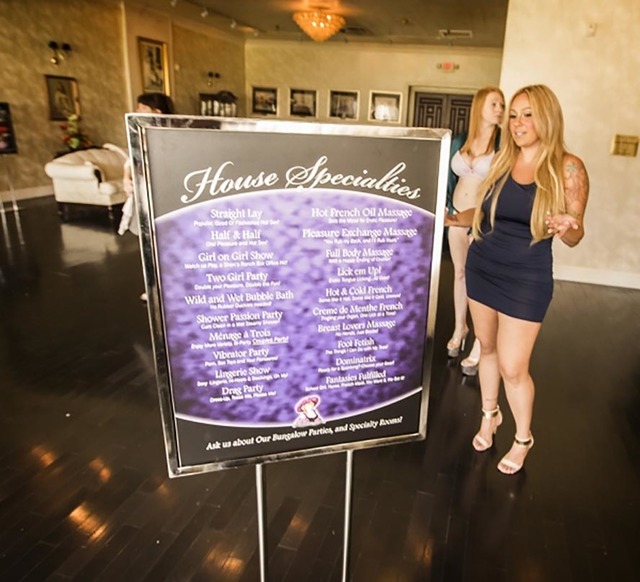 Sex workers stand in front of the menu at Sheri's Ranch brothel. The owner said increased fees and policy changes under discussion in Nye County would force them to raise prices for their services, which in turn could lead to a rise of certain activity. Jeff Scheid/Special to the Pahrump Valley Times

Brothel owners in Nye County have finally submitted paperwork stating what the impact on their business would be if the county raises certain licensing fees.

After proposed changes to the Nye County brothel codes had been introduced at the Sept. 6 county commission meeting, owners of the brothels were asked to submit these business impact statements.

However, the three owners said they were not given notice, so the board decided to delay the item until a Sept. 20 meeting, which was then put off until Wednesday’s teleconference by the County Commission.

Commissioners are scheduled to review and possibly vote on the changes at their Tuesday, Oct. 18, regular meeting.

In their submissions, all the owners argued that the fees and some new policies would be detrimental to the business, and Pahrump in general.

Ken Green, owner of the Chicken Ranch, located on Homestead Road since 1982, explained that the brothels are a catalyst to drawing outside visitors to the area.

“We are an important tourist attraction, attracting visitors who spend money at other businesses in Pahrump while sightseeing in the area,” Green said. “We have hired, shopped and utilized services over the years that have contributed to the local economy.”

Green went on to say that the overall economic benefit of having the Chicken Ranch in the area since he’s owned it would be “many millions of dollars.”

As far as the proposed fee increases, Green believed that they were too steep and not clear enough.

“The proposed revision …contains increased fees of 40 percent or more over current fees,” he said. “It contains revisions that appear vague, overboard, confusing, overly-restrictive and possibly open to constitutional challenge.”

The law firm, Fox Rothschild, who represents Sheri’s Ranch, issued that establishment’s business impact statement. Their statement claimed that the brothel pays its 34 employees more than $2.5 million per year.

Their statement explained that jobs outside of the legal courtesans are created at the brothels. It also pointed to Nye County’s higher-than-state-average of joblessness, and the effect of them downsizing their staff would have in the area.

Sheri’s Ranch says they pay vendors, many of which are local, an estimated $100,000 per month.

The statement goes as far as claiming that if fees are raised, that they will have to raise prices for their services, which in turn could see a rise of nefarious activity in the county.

“The crime rate index in Pahrump is 98, which is slightly below the national average of 100,” the statement said. “Customers of brothels frequent this type of establishment for companionship and generally to feel good about themselves.

“If such customers can no longer go to Sheri’s and other brothels, there could be an increase in the crime rate.”

In addition to the possible rise in crime, Sheri’s Ranch said that taxes and fees they pay could decrease, leading to a loss of revenue that could negatively impact Nye County’s infrastructure.

Dennis Hof, owner of the Area 51 Cathouse in Crystal, explained that the proposed amendment barring armed security guards will put the working girls in danger and could force them to travel elsewhere to conduct business.

“Prostitutes who came to work in the legal brothel industry in Nye County for safety and protection will likely go pedal their trade in other counties, either legally or not.”

The proposed rules changes for the brothels, which the owners spoke on, will include both adverse and beneficial economic benefits.

Together that would draw in an additional $61,500 per year to the county.

Those licensing fees which will increase will cost brothels more money, depending on the number of prostitutes they have at their establishment.

Also rising is the quarterly registration fee a brothel worker must pay, jumping from $125 to $150.

Also, there will be a section added assessing tiered penalties for violations of the ordinance.

The number was derived by adding up the number of active brothels (five) which equates to revenue increases of $9,250 per quarter and number of current active work cards for brothel workers (121) which the county anticipates seeing increased revenues of $5,525 per quarter.

A beneficial effect of the amended ordinance is that the board may issue temporary licenses to applicants for a specific period of time, entitling the person named on the application to work at a brothel for profit.

A direct effect of the adjusted fees and enhanced licensing requirements is that stricter controls and oversight of brothels will be possible, although the brothel owners believe the opposite effect will occur.

An indirect effect of the changes will be that the fee increases will lead to increased revenue, which will go toward costs associated with background checks and investigations and increase revenues going to the county’s ambulance fund.

The county explained that the continued existence of the brothel industry is dependent on public confidence and trusting that licensed prostitution is carried out honestly and competitively while operating free of criminal and corrupting elements.

The board explained that public confidence and trust in the brothel industry can only be maintained by strict regulation of all persons, locations, practices, associations and activities related to the operation of a licensed brothel.

Those regulatory practices include the necessity for background and investigative fees and the assessment of fees and fines to ensure compliance with county ordinance and state law.

There will be an excluded person blacklist section added, which will prohibit some customers from patronizing a brothel.

The annual cost to the government for the enforcement of the proposed changes will be neutral due to the increased fees and the providing of stricter internal controls of the brothel industry.