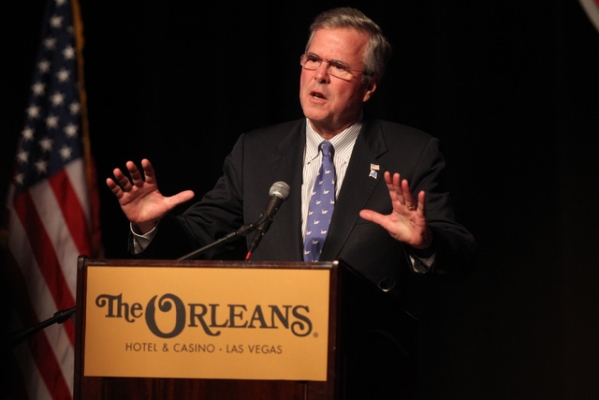 The former Florida governor announced his western lands priorities during a roundtable discussion with ranchers and elected officials at Rancho San Rafael Park in Reno.

“There should be a shared use of the land,” Bush said.

Much of the West falls under federal control. More than 80 percent of the land in Nevada is managed by federal agencies, the most of any other state.

“I think they ought to be out living amongst us,” Bush told a few dozen people who attended the hourlong event, which was not open to the general public. He said the Department of Interior should relocate to a Western city to be closer to those most affected by its decisions.

“I think these lands have to be managed in a true partnership,” he said, adding that public lands “should be viewed as something that creates economic activity, can create cultural values, create wins for citizens and residents of the West.”

He advocated reducing the time it takes for issuing permits for land uses such as mining to no more than two years; managing forests to decrease the threat of catastrophic wildfires; and redirecting some funds for federal land acquisition to reduce the backlog of $11.5 billion in maintenance projects at national parks.

Bush also said funding, studies and permitting for water projects such as water storage should be expedited to address the devastating drought in the West. He said he would stop the “Waters of the United States” rule, currently on hold by court order, that seeks to broaden the federal government’s oversight of interior ground and surface water.

About a dozen protesters demonstrated outside the event, holding signs that read “Public land patriots,” “Don’t fence me out,” and “Keep our public lands in public hands.”

Control of western lands has been a flashpoint at various times in Nevada over the years, most recently in April 2014 when Southern Nevada rancher Cliven Bundy and scores of armed supporters confronted Bureau of Land Management officials who tried to confiscate his cattle for nonpayment of $1 million in grazing fees. The standoff ended when federal officials left the area out of public safety concerns.

Many conservationists and outdoor enthusiasts fear giving states more control would cut off access to millions of acres now open to the public.

“When presidential hopefuls from both parties visit the West, they must understand the importance of public lands to the people who live here,” said Jennifer Rokala, executive director of the Center for Western Priorities.

She said it is important to preserve access to public lands for hiking, hunting and fishing.

Bush agreed, saying he would establish a goal of “no net loss” of sportsmen’s access and encourage the enjoyment of America’s outdoors.

Bush also spoke in North Las Vegas, where about 300 people attended a forum organized by the LIBRE Initiative at the College of Southern Nevada, Cheyenne campus.

It was moderated by Daniel Garza, executive director of the non-partisan organization, which has the goal of educating Hispanics about issues that include limited government and free enterprise.

He stressed this is not a big requirement for people because “that’s exactly what they do,” adding it allows them to be “treated with dignity and respect.”

Bush, who championed school voucher programs when he was governor of Florida, praised Nevada’s education savings account program, which allows parents to put their child’s public school funding toward tuition at a private school.

“It is one of a kind in the country,” Bush said, calling it “incredibly ambitious.”It is very provocative. It’s bold. It’s the kind of reform you seldom see anymore.”

He said the federal government should work as a partner with states to provide supplemental federal dollars for such programs.