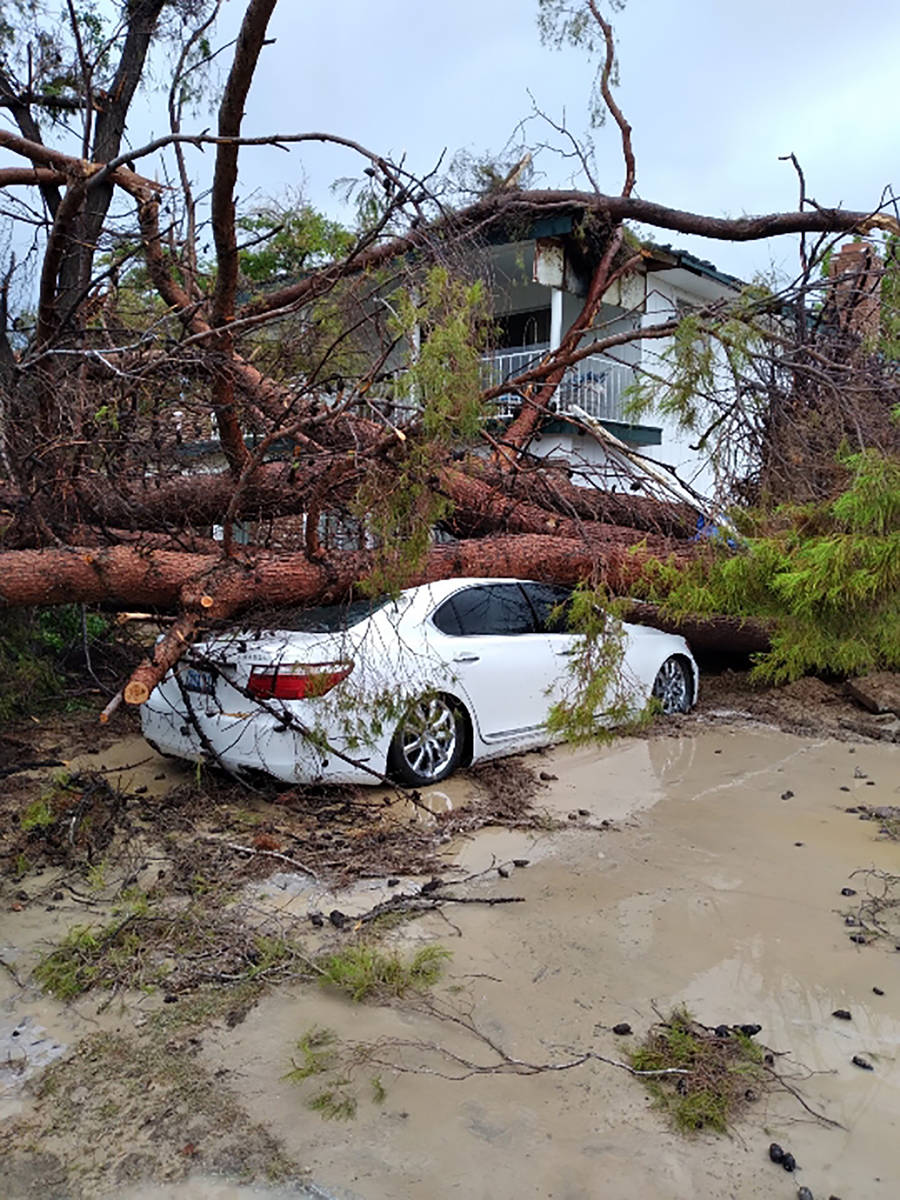 Selwyn Harris/Pahrump Valley Times On Sunday evening July 25, wind gusts caused a mature pine tree to fall upon the roof of a home and vehicle along the 1100 block of Fifth Street. No injuries were reported. 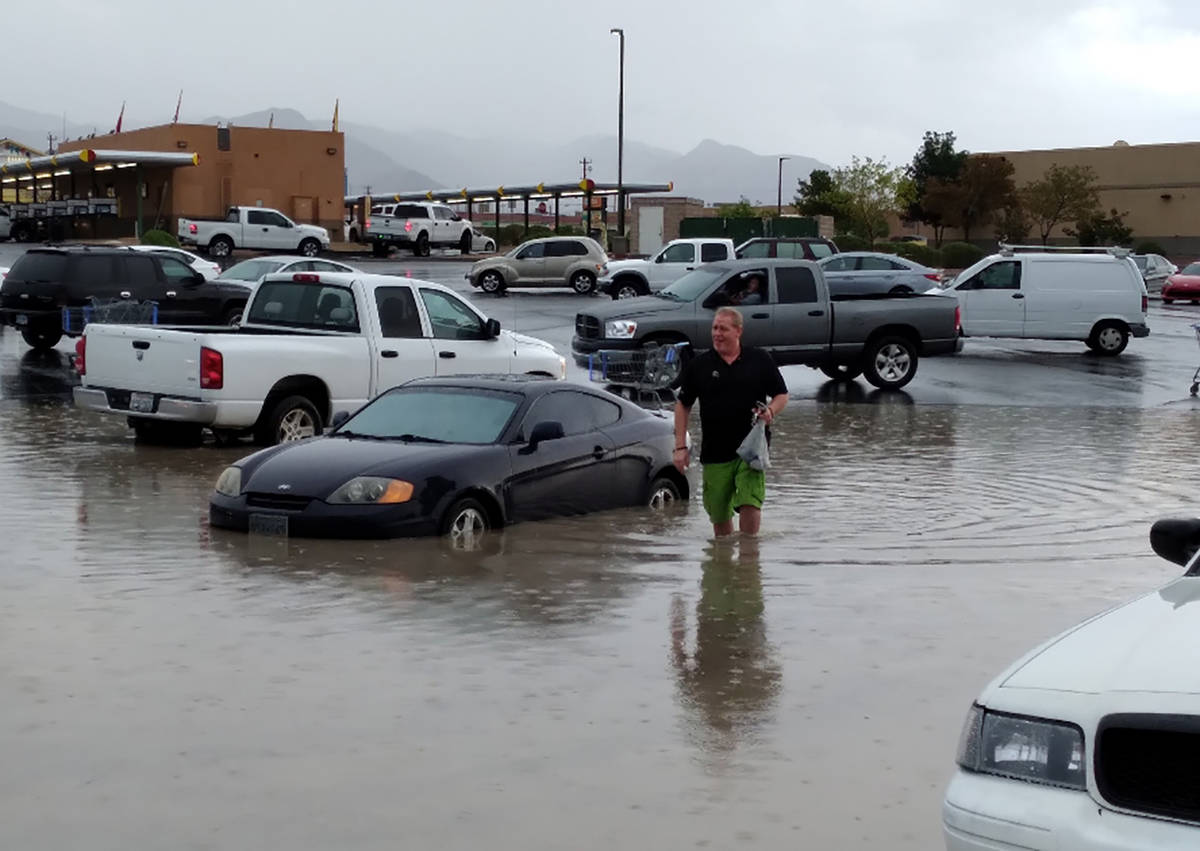 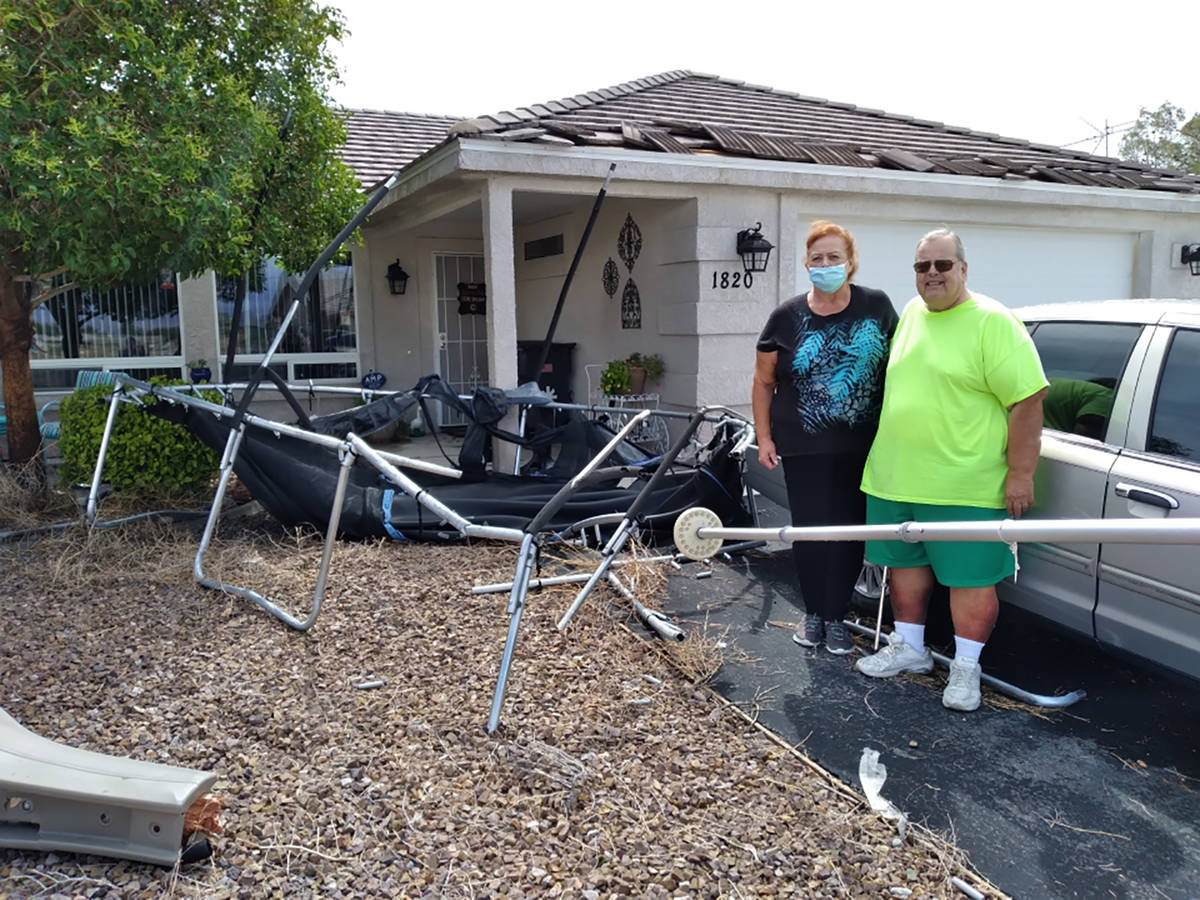 Selwyn Harris/Pahrump Valley Times A support column at the entrance of Dale and Anne Marie Noha's home actually stopped a wayward trampoline from hitting the living room window at their Upland Avenue residence. Neither sustained any injuries. 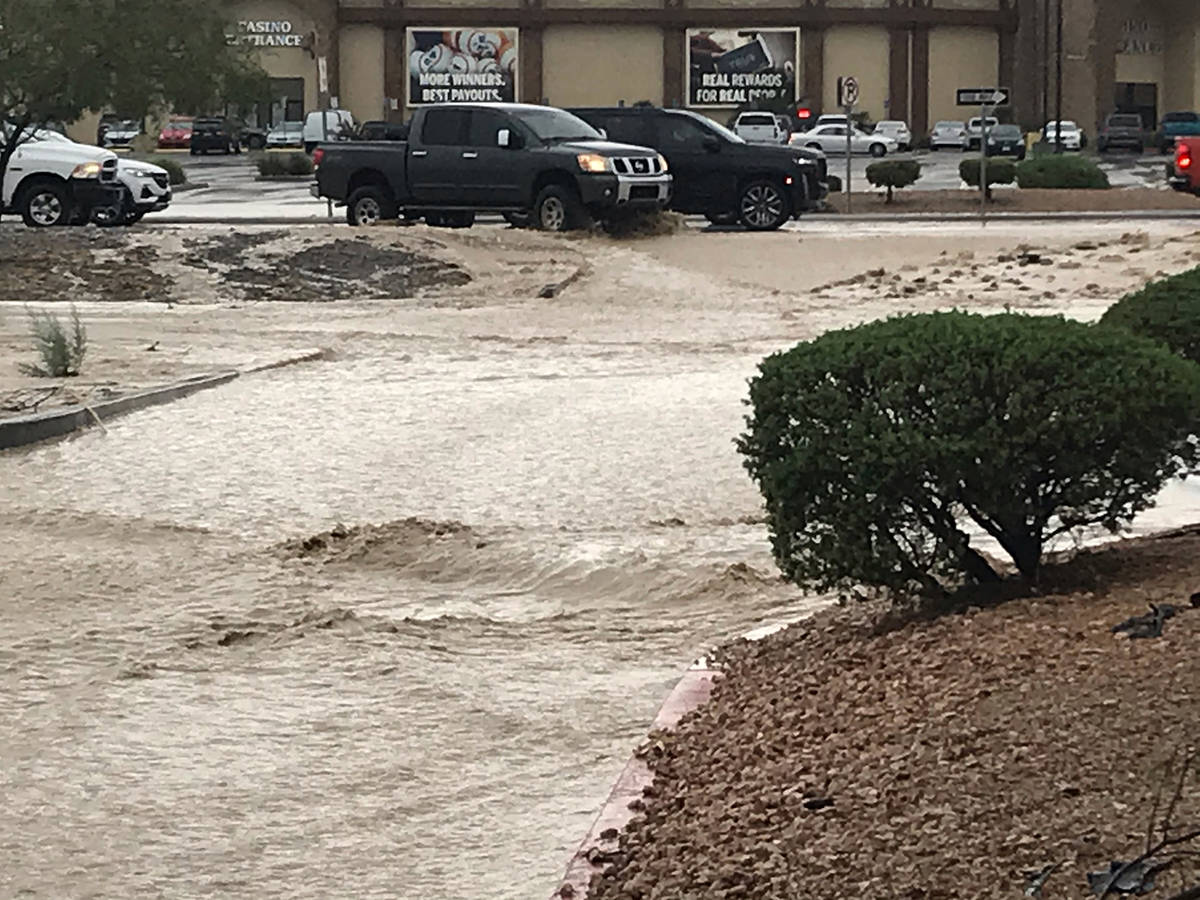 Special to the Pahrump Valley Times This photo shows flooding near the Bank of America parking lot at the corner of highways 160 and 372.

Theresa Osborne, who owns Game Corner Arcade and Family Fun Center at 1190 E. Highway 372, said she was at a loss for words when she saw the aftermath of the storm once she arrived at her business on Monday morning.

“I live on the south side and it wasn’t too bad but I was shocked when I came here and saw all of the signs in the front that were knocked over,” she said. “I found my sign way down the street.”

As a former Florida resident, Osborne said she knows a thing or two about severe weather conditions.

“It must have been a downburst to cause all of the damage,” she said. “I’m from Florida, and I know about hurricanes. Those were some very strong winds. I just feel sorry for the people whose properties were damaged. Other than my sign being blown away, the arcade is fine.”

Rhoda Burr and her husband manage A-Payless Storage and a U-Haul business along the 2400 block of East Basin Avenue.

The location is also home to a company which stores its medical supply equipment at the property.

Burr noted that the storm caused extensive damage to the businesses.

“It took the roof off of both buildings, moved some RV’s and took our cameras out,” she said. “There’s all kinds of water damage, and both of the ceilings inside were destroyed and they are going to fall.”

As the property manager, Burr said she also resides there as well, where she witnessed firsthand, the devastation in the wake of the storm, which she referred to as a “mini-tornado.”

“We didn’t wait until the morning, because after the storm passed, we came out and looked,” she said. “I couldn’t believe it, because I assumed it was a microburst, but that was no microburst. I’m from Kansas, and the way it sounded in our house, I think it definitely was a tornado, and it sounded like a freight train was outside our house. It was horrible because we had water lines burst, so we don’t have any running water, and we have to close for now.”

Closer to the heart of town, on Monday morning, Kimberly Meza was taking pictures of the devastation created when the winds caused a mature pine tree to fall upon the roof of her grandmother’s home and vehicle along the 1100 block of Fifth Street.

“Everyone’s fine but as you can see, the tree hit the car and part of the house but nobody was outside, so everyone’s okay,” she said. “My cousin lives here and she got it on video. Her car and my grandmother’s car were both smashed. They’re both totaled for sure. We’re all physically OK, but very shaken up because it was really scary. Fortunately the power was restored this morning.”

Unlike most people who would normally run for shelter from unrelenting weather conditions, Alexander Friger said he was mesmerized by the tempest, as it swept throughthe area of Bourbon Street and Red Butte.

“It was pretty vicious and I was actually out in it because I’m fascinated by that type of stuff,” he said. “It sounded like a freight train and there was so much water coming down. I grew up in Las Vegas and I’ve seen a few good monsoon weather seasons and this definitely compared. There were 70-plus mile an hour winds and we had a tree that was uprooted in the courtyard of our apartment complex.”

Another tree that was felled by the storm landed right in the middle roadway on Red Butte Street, which was a cause of concern for Friger, who said motorists would not have been able to see the tree until it was too late.

He took it upon himself to fashion portable lights on the branches of the tall pine tree as a warning to drivers.

“We were inside the garage, and when we came back out, it was laying on the street,” he said. “This was in the middle of the night, and you actually didn’t see it down unless there was a lightning strike. I have relatives in Miami and I have seen the aftermath of hurricanes and that’s what it reminded me of.”

Local resident Marcus Nix made a stop at Walmart just before the storm front descended upon the valley on Monday.

Upon exiting the store, he noticed his vehicle was partially submerged in water.

Nix was knee deep when he put items in the trunk of his Hyundai Tiburon.

“When I walked in, it was dry, but when I walked out, my car looked like it was in the middle of a lake,” he said. “ When I opened the trunk, I could see from behind that there was no water on the floor, but it was clearly above the doorline, so I didn’t want to open it, because it looks like for now, it’s keeping the water out.”

Regarding Sunday evening’s wicked rain and wind event, Nix said he and his family took it all in stride.

“It really didn’t bother anything and we ended up opening the windows and doors just to let the air come through,” he said.

At the height of the storm, Dale and Anne Marie Noha were safely ensconced inside their Upland Avenue home with their windows and doors secured when all of a sudden, a neighbor’s trampoline flew roughly 60 yards into their yard, nearly shattering the living room window of the residence.

A support column at the home’s front entrance actually stopped the wayward trampoline from hitting the glass, according to Anne Marie.

“It was about 10:30 and Dale was sitting right by the window, and this column protected him from being killed,” Noha said. “This is a very heavy trampoline and my neighbor was shocked too. They offered to come over and help us clean up because we’re both handicapped. It was an act of God that nobody was hurt here.”

“There’s dents all over the car, the flagpole snapped and the mailbox was blown over,” she said. “Our flag was on the ground so we took it inside. We’re just thankful that we’re OK.”