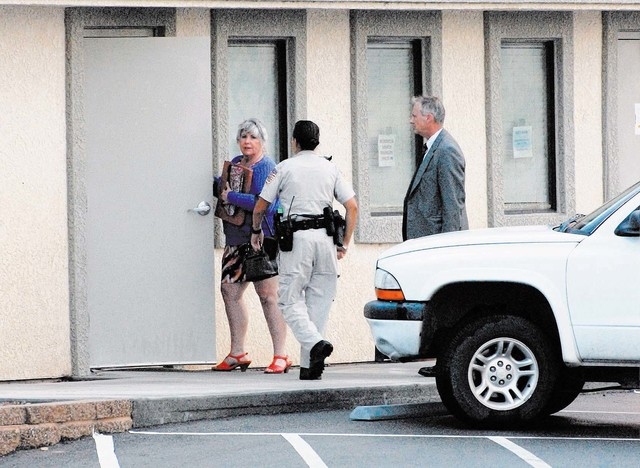 Sources say Stringer had installed a surveillance camera in her office after she suspected someone was going through her desk when the assessor’s office was closed. Matson called police to investigate the installation of the camera. When the investigation was complete, a Nye County Sheriff’s detective, Joe McGill, concluded no laws were broken.

Matson then attempted to terminate Stringer and she fired the detective’s wife, Tammy McGill, who happened to work part-time in her office.

“I honestly cannot. I am on administrative leave, that’s all I can tell you. That’s just protecting myself,” Stringer said. “Eventually it will all come out.”

Matson herself said, “I’m not going to comment on it, I really can’t. It’s all internal and it shouldn’t be discussed anywhere. She’ll get her say.”

In an angry email later, Matson said, “what is going on with Sheree Stringer and the county assessor office is ‘confidential’ and not to be given to the PVT.”

She accused District Attorney Brian Kunzi of leaking the information.

“I am going to be a better person than you all, no comment for now,” Matson said. “What and the hell is wrong with you people (Shamrell, Kunzi and your gang of misfits) do you have even an ounce of class or any respect for the county.”

“I’m not going to confirm or deny that. But Sheree is still a county employee,” Shamrell said.

“There’s a process that has to be done with anything regarding elected employees,” she said. “The process is being followed based on the collective bargaining agreement.”

“We don’t discuss personnel matters with the public,” Shamrell said.

Kunzi would only confirm what little information had been released so far, that Stringer was on paid administrative leave.

“You have accurately described the situation. I cannot add any additional comment at this time,” Kunzi said.

Stringer finished comfortably ahead in the June Republican primary for assessor with 1,620 votes, 42.85 percent of the total. Matson also advanced to the general election, finishing second in a five-way race, with 1,102 votes, 29.15 percent.

In a reply from Kunzi at that time, the DA pointed to an employee’s right to due process.

“When the county attempts to terminate an employee in the competitive service or what is termed the classified service we will need to prove to an arbitrator that we have the basis to take the action we took. This means we must prove we complied with all county collective bargaining agreements, policies and codes,” Kunzi wrote in a Jan. 24, 2012 email to Matson.

Asked about the issue, County Manager Pam Webster said, “I can confirm Sheree Stringer is on administrative leave. There is a process that will be followed going forward, and I am not involved until it passes several hurdles, and comes to me for final county position on the issue before going to arbitration. I will make a decision at that time, when I have all the information before me.”