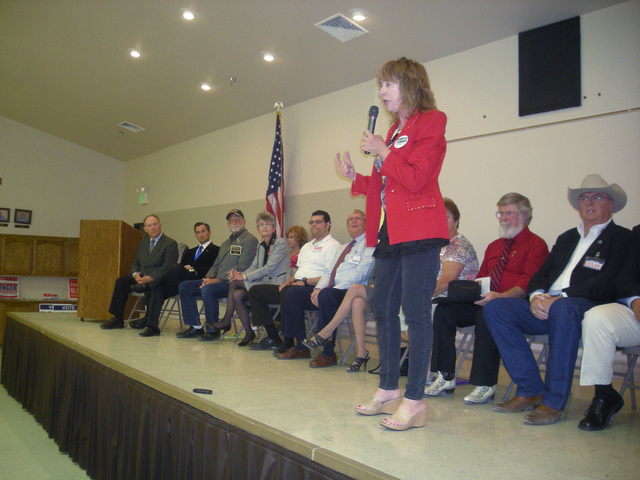 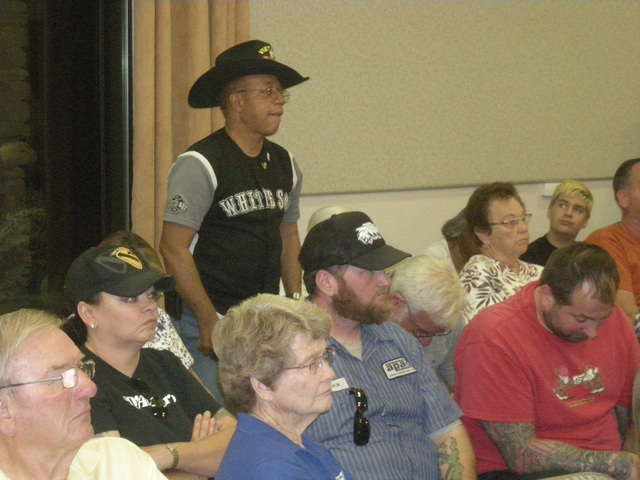 Candidates have traditionally fielded some tough questions from the audience during the candidates’ forums at the Artesia Community Center and Wednesday night’s event was no different.

Attorney Lillian Donohue was asked about accusations by attorney Brian Hardy that she was standing in front of her opponent’s courtroom, Fifth District Judge Robert Lane, soliciting clients, promising them Lane would then have to recuse himself from the case.

“Didn’t do it. I was actually talking to one of my clients and the attorney who made the comment was soliciting my client,” Donohue said.

In her stump speech, she spoke about having 37 years as an attorney, her love of the rural areas and said she worked on a pro bono basis defending the downtrodden, including children, animals and elders. “Tonight I’m wearing bullets around my neck because I’m such a believer in the Second Amendment,” Donohue said, to applause.

Ray Yepez asked assessor candidate Leonardo Blundo why Blundo deleted his question on social media asking about his personal property equipment taxes. “You need to understand, it’s a personal business and if you’d like you can ask me one-on-one,” Blundo said. He talked about a taxpayer bill of rights which he said, “explains and dictates how we treat you and what we do for you in regards to that office. It’s how we’re going to listen to your opinion, it’s how we’re going to respect and it’s how we’re going to treat you with great customer service in that office,” Blundo said. He seemed to side with property owners even on appeals. “I never want you to go before the Board of Equalization. That means we made a mistake somewhere.”

Assessor Shirley Matson was in the audience but didn’t want to get up on stage. Richard Marshall didn’t have to field any questions, after he explained his 31 years experience with the Virginia Beach assessor’s office.

Sheree Stringer proclaimed, “I am the most qualified candidate for this position. I am the only licensed appraiser that is running for this office. I have been in the valley for 38 years. I know most of the people in the audience.”

District 5 County Commissioner Dan Schinhofen and his archrival, Pahrump Town Board Vice-Chairman Bill Dolan, continued to trade barbs. Schinhofen teed off on Dolan’s comment he told one of the owners of Spring Mountain Motor Sports the night before about how “he makes it easy for me to go around the state, around the country, and tell people how nice it is in Pahrump.”

Schinhofen noted Dolan voted against the Spring Mountain development agreement at the Tuesday town board meeting. Schinhofen added, “that’s going to bring the biggest commercial development to the valley we will ever see.”

“You talk to commissioners, yes they submitted a balanced budget every year, a 10th hour crisis. This year the budget deficit is as large as it’s ever been. Dan McArthur, an auditor for your county, has said year after year after year, ‘start looking forward, you’re just digging yourself in a bigger ditch.’ We need to get a handle on it,” Dolan said. “Raising taxes is not the issue, firing dispatchers and closing jails, putting people in jeopardy in the northern part of this county is not acceptable, taking actions that continually get lawsuits filed against you, spending tax dollars with private firms to represent you is costing us money.”

District 5 candidate Walt Grudzinski, who said he served on a town board in a similar community of 42,000 population, referring to Sierra Vista, Ariz., said he was a budget guy who was a retired chief operations officer for the Defense Intelligence Agency.

Schinhofen said the county had to cut 61 employees during his term due to declining property tax revenues, $10 million the county no longer gets for the Yucca Mountain project and this year a drop of $1 million from the net proceeds of mining. But he said there will actually be more veterans services with the state taking over the program.

“Every year we get less in property revenues, so we have to look at everything. We have consolidated a number of departments and put nobody at risk. We put dispatching in one location but we have redundancy in Pahrump and Tonopah,” Schinhofen said.

Richard Goldstein brought up 36 internal violations cited by the county auditor, asked why the county can’t get the budget straight after three years in the hole and accused Schinhofen of having problems with the Internal Revenue Service.

“We do not have the luxury to raise your property taxes three times in a row like the town board did,” he said.

Dolan said in previous campaign forums he voted against the tax increase.

Dolan was asked why he’s pushing for incorporation, when citizens voted it down three times.

Dolan was asked about losing a house to foreclosure. “The house was given to my ex-wife in divorce and yes, she let it go to foreclosure,” he replied.

District 5 candidate Dave Caudle was asked why he resigned from the new groundwater management committee, claiming it was a front for a plan that was already drafted. Caudle claimed the county plans to have a valley-wide utility, which will mean higher utility bills.

“If you watch all the videos from those meetings, you will see the work plans put forward by that board the first thing they wanted to do was cut down on the well owners’ water,” Caudle said. If the county takes over utilities, he said, “they do not answer to the PUC so they can charge anything they want.”

District Attorney Brian Kunzi said a proposal for a sheriffs citizen review board was being prepared, but didn’t tell a questioner when it would be ready.

Public Administrator candidate Bob Pilkington, owner of My Paralegal, said besides the $44,000 in expenses for one case that made the press and the account about former public administrator Bob Jones still handling a case four years later, there was another scandal.

“I did an estate plan for a lady, she bought a $700,000 estate, she passed away. It took two signatures to hand off that estate to the beneficiary. The Nye County public administrator’s office stepped in, it langoured in the court two-and-a-half years. The Nye County public administrator’s office took $150,000 from that estate and they were paying office assistants, office help, $700 to $750 per week,” Pilkington said.

His opponent, Robin Dorand-Rudolf, continued to refrain from addressing Pilkington’s accusations. She mentioned her 20 years as a Pahrump resident, with 20 years in “the death care industry” as a funeral home owner and deputy public administrator the last seven years.

Assistant Sheriff Rick Marshall had to answer for his arrest for stealing “Anybody but Rick” campaign signs.

“I believe in ownership, it’s on me. I take responsibility over it. I don’t believe it was handled properly by our agency or myself. The Anybody But Rick crowd has been posting videos about me, my wife, about my children and myself,” Marshall said. “I had contacted the landowners prior to putting up my signs so I could get permission to put them on their property. Every single one of them I have it in writing, if you see these negative signs take them down.”

Pahrump Town Board member Tom Waters asked former Captain Bill Becht, now a sheriff’s candidate, about comments he made when he retired last September, that happiness was seeing Pahrump in his rear view mirror.

“I left Nye County with the intention of leaving all the politics and all the drama and everything else behind as well as my retirement was pretty well publicized. I didn’t want to be going through Walmart and having someone say, ‘hey you’re the no good rat who arrested me 15 years ago,’” Becht replied.

Marshall, a 37-year sheriffs veteran, said he wrote grants for $23 million for the sheriff’s department. Becht, with 24 years at the NCSO, said he wouldn’t strip deputies from street patrols to create an undersheriff position.

Candidate Galen Morgan, a former California Department of Corrections officer for 22 years, said, “I was invited to come here to run for sheriff and that was a good thing because it allowed me to escape California.”

Detective Eric Murphy, who said he joined the Pahrump Valley Fire and Rescue Service as a volunteer fireman in 1992 and joined the Nye County Sheriff’s Office in 2003, said he was a two-time Medal of Valor recipient. But he was asked about his administrative ability.

“I was a lieutenant in the fire department. You were in control of fire scenes when firemen entered entered a building,” Murphy said. “What makes me different is my work ethic and I’m on the street at this point in time.”

District Attorney investigator Sharon Wehrly said she has been a sworn police officer since 1975 and helped start the Pahrump Ambulance Service and Nye County Search and Rescue. When asked, she supported drug testing of deputies.

Private investigator Mark Zane said he worked for the Nye County Sheriff’s Office from 1980 to 1995, eight years under Sheriff Harold “Stick” Davis and was the first to graduate from the FBI Academy. He suggested a Pahrump constable to serve civil documents and papers.