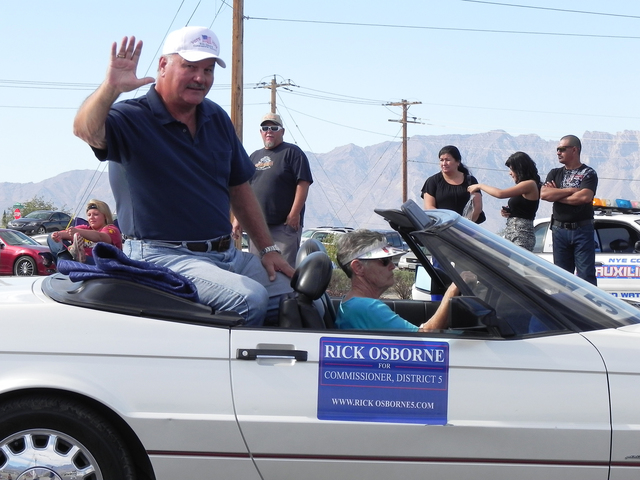 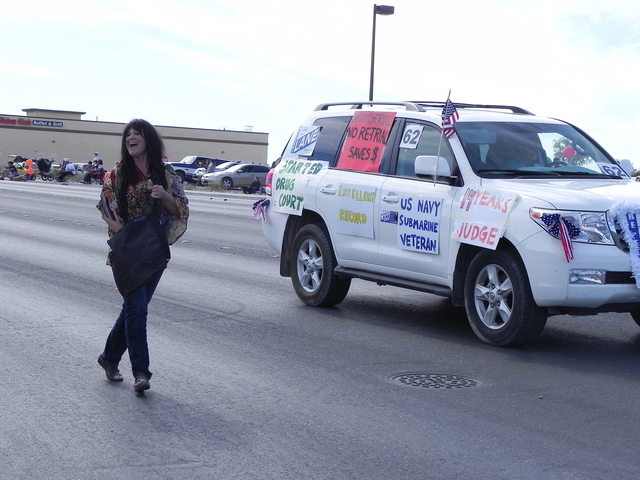 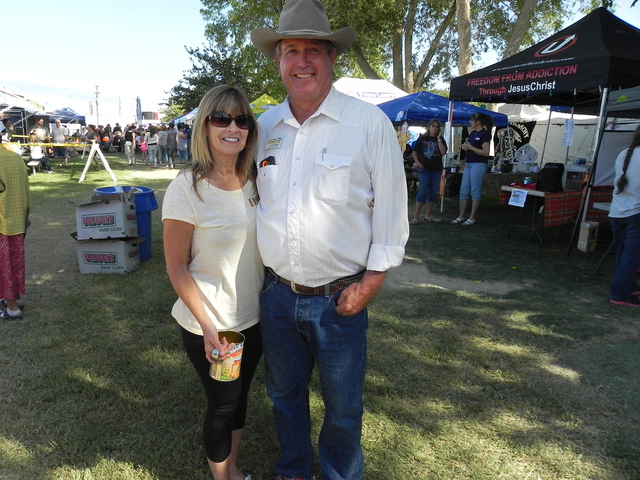 Appearances at the annual Fall Festival are a must on the political calendar and candidates were busy meeting the public, in one way or another, as the race for the Nov. 4 election goes into its final stretch.

Nye County District Attorney candidate, Republican Angela Bello, did her part as she stepped out of the dunking booth at the Pahrump Fall Festival Saturday. She was wet and cold, but still smiling.

“I wish I would’ve been dunked more. The water was warm, getting out was cold,” Bello said afterwards. She added there was a lot of chlorine in the dunk tank. “My eyes were red for several hours.”

Bello said besides the publicity, she was helping a needy cause, WestCare, a local counseling service. Pitchers paid $7 for five softballs to throw at the paddle that activated the dunking booth, but there weren’t many accurate throwers. Her opponent, incumbent Democratic District Attorney Brian Kunzi, also took the plunge.

The theme of the parade centered around Nevada’s 150th anniversary of statehood this year. Nye County Clerk Sam Merlino rode on a float with a farming theme with hay bales, her opponent Sheila Winn had a booth.

Fifth District Judge Robert Lane’s wife Samantha, wearing a long, black wig, walked along the parade route next to her husband’s float chanting, “Fourteen years, no reversals” meaning his decisions weren’t reversed in 14 years on the bench. His opponent, attorney Lillian “Lil” Donohue was waving from atop a red pickup truck.

The sky wasn’t the limit for sheriff’s candidate, district attorney’s investigator Sharon Wehrly, who hired an airplane streamer that flew above the crowd Saturday afternoon with the message, “vote Sharon Wehrly 4 Nye County sheriff.” She rode on horseback in the parade, along with supporters and a huge horse trailer.

Her opponent, Rick Marshall, had to walk a fine line at the festival, making sure he campaigned outside of working hours as he also helped provide law enforcement at the event.

“I was working the last two days. I put seven hours each day here in uniform and guys would come up to me and they would say, ‘what is your policing philosophy?’ Well I can answer that, that’s not a campaign question, that’s a normal question but when they would ask me things about my campaign I would have to tell them I’m on duty and I’m in uniform and I cannot answer those questions,” Marshall said.

Laura Billman, who is running Marshall’s campaign and other prominent politicians, said appearances at the Pahrump Fall Festival are a must.

“I think it is extremely important for a candidate to be out there talking to the public whether it’s the Fall Festival or any other event in Nye County. They need to meet the voters,” Billman said.

Marshall’s schedule includes a visit to Beatty Days at the end of October and Railroad Days in far-flung Railroad Valley. about 275 miles northeast of Pahrump.

Both sheriff’s candidates are invited to attend a debate at the Pahrump Nugget Oct. 7, another debate at the Veterans of Foreign Wars Post No. 10054 and a candidates’ forum at Artesia Community Center Oct. 15. District attorney and opposed county commission candidates have also been invited. The VFW event is also a food drive for unfortunate veterans.

Even candidates who had minimal opposition, like Pahrump Justice of the Peace Kent Jasperson, were manning a booth. His opponent, Anita Springs, has hardly campaigned.

“I want to be in touch with my voters that’s why I’m out in the community, I want to talk to the people. I want to get feedback from them. I want to know if I’m doing the right things and what their ideas are, that may help me, I may change some things I’m doing,” Jasperson said. “I had quite a few people stop by and talk to me, a lot of people who recently moved to the community that are going to vote for the first time, they want to know what’s going on.”

Fifth District Judge Kimberly Wanker is unopposed but she was promoting the drug court program. Wanker said she administered juvenile court for Lane Tuesday, so he could participate in a campaign forum at the Tonopah Convention Center.

“We’ve had a lot of positive feedback. Most of our drug court is employed, we have people that come by and we tell them, look they are the perfect candidates for employment because they are drug tested randomly. We randomly drug test seven days a week,” Wanker said. “I had a couple of employers come over and tell me how pleased they were with people from drug court.”