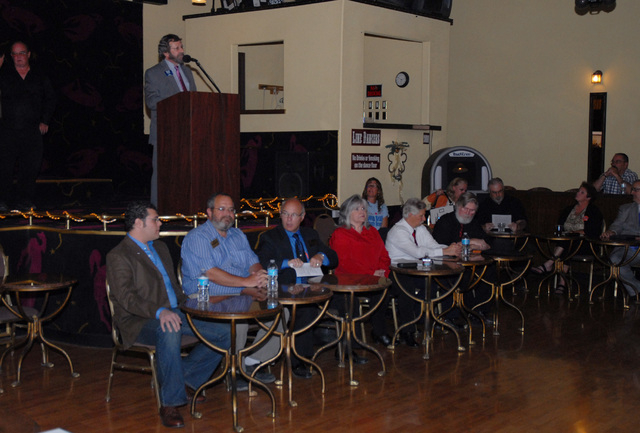 Those were the most popular topics at a political meet and greet event hosted at the Maverick Wednesday evening.

Incumbent District Court Judge Robert Lane said he has enjoyed his 14 years on the bench and told the audience he has very rarely been reversed on any case he has handled, and when he has it has only been on minor issues.

His opponent Lillian Donohue said she has been working her whole career to get to this point, and if elected would like to restore the public’s confidence in the judicial system.

Nye County Assessor Shirley Matson spoke of her accomplishments during her term in office, including improving the department’s technology. Matson said she is a licensed real estate broker in California, and qualifies as a licensee in Nevada. She added she is now looking to begin work on verifying all property values in Nye County.

In the past Stringer said she worked with Bank of America and that she and her husband owned a business together, which she believes has given her the leadership and management experience needed for the position.

Assessor’s candidate Leo Blundo said if elected he would do three things for the office: maintain integrity, streamline operations to save taxpayers money and make sure the office’s operations are transparent.

“We’re going to streamline that office to save you folks taxpayer dollars, that means a lot to me, because guess what, I’m a taxpayer just like every single one of you,” he said.

Candidate Richard Marshall said he has 31 years experience as a real estate appraiser and believes to be successful the assessor must be honest and fair.

Nye County Clerk Sam Merlino told the audience she is dedicated to the clerk’s office and that she has worked hard for the citizens of Nye County during her tenure in office.

Nye County Public Administrator candidate Bob Pilkington said his goal is to bring organization and accountability to the office.

His opponent Butch Dole, said he will bring honesty and integrity with him to the office if elected.

District Attorney Brian Kunzi was the only DA’s candidate that spoke at the event. He told voters he has saved the county more then $1 million since he took office.

District 4 Commission candidate Julie Hargis said she owns a local business and manages another. She said she is dedicated to the community and through her work with local businesses, she has the leadership skills necessary to represent her fellow citizens.

District 4 Commissioner Andrew “Butch” Borasky told voters he is for lower taxes, less government regulation and more transparency. He added that he is the only commissioner who has brought forth second amendment legislation in the last 20 years, and hopes to author another if re-elected.

District 5 Commissioner Dan Schinhofen said over the last five years commissioners have cut the county budget by $5 million and 50 employees. He also said he has worked continuously to have the science behind the Yucca Mountain project released.

“On Yucca Mountain, my first month in office I authored a resolution that called on the NRC and DOD to move forward with the licensing so we could hear the science. We want the science heard, we want a fair and honest airing of it so we can decide if we want it or not. And if it’s safe, we’d welcome the jobs it would bring,” he said.

Schinhofen’s opponent David Caudle said his main concern if elected would be exploring the water use issue in the Pahrump Valley and candidate Walt Grudzinski said he would like to work with educational institutions and local organizations to bring good paying jobs to the county to promote economic growth and provide an opportunity for young people who want to stay in the community to be able to do so.

Assistant Sheriff Rick Marshall said if elected he would lead a public service-oriented office, focusing on lowering crime rates, putting crime prevention programs in place and partnering with the public and other agencies to keep the county’s communities safe.

NCSO Det. Eric Murphy said he has called Nye County home since 1978, and is dedicated to serving the public.

Galen Morgan, a retired corrections investigator from California, said although he has only lived here one year, he believes his conservative values and investigative background would not only help him be an effective sheriff, but to bring respect and dignity to the department.

Former NCSO Capt. Bill Becht told voters he served Nye County for 24 years before retiring. He said he believes he has great people supporting him in the race and has a complete outline of his vision for the sheriff’s office already mapped out.

Sheriff’s candidate Sharon Wehrly said she has an action plan written out for her first 100 days in office. She hopes to bring accountability and credibility back to the NCSO and said her background working as a sworn peace officer for 25 years with the federal government will help her be successful if elected sheriff.