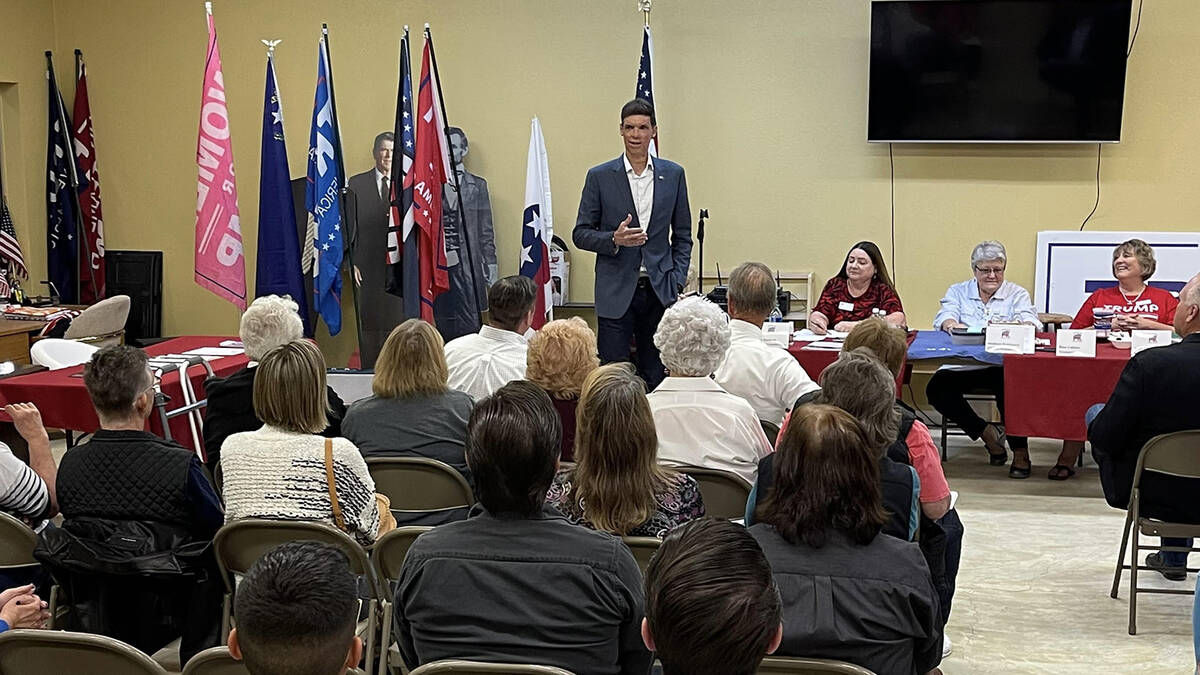 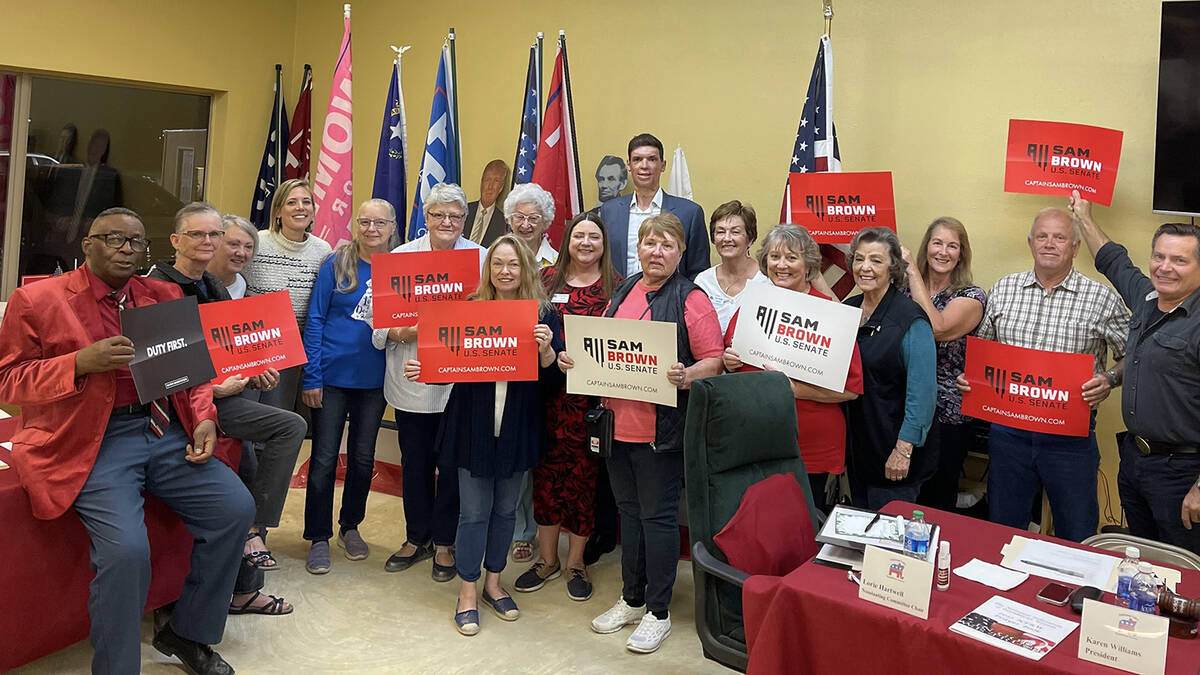 Special to the Pahrump Valley Times Capt. Sam Brown, who is seeking the Republican nomination for the U.S Senate seat in Nevada in 2022, is pictured surrounded by supporters proudly displaying campaign signs during his recent trip to Pahrump. 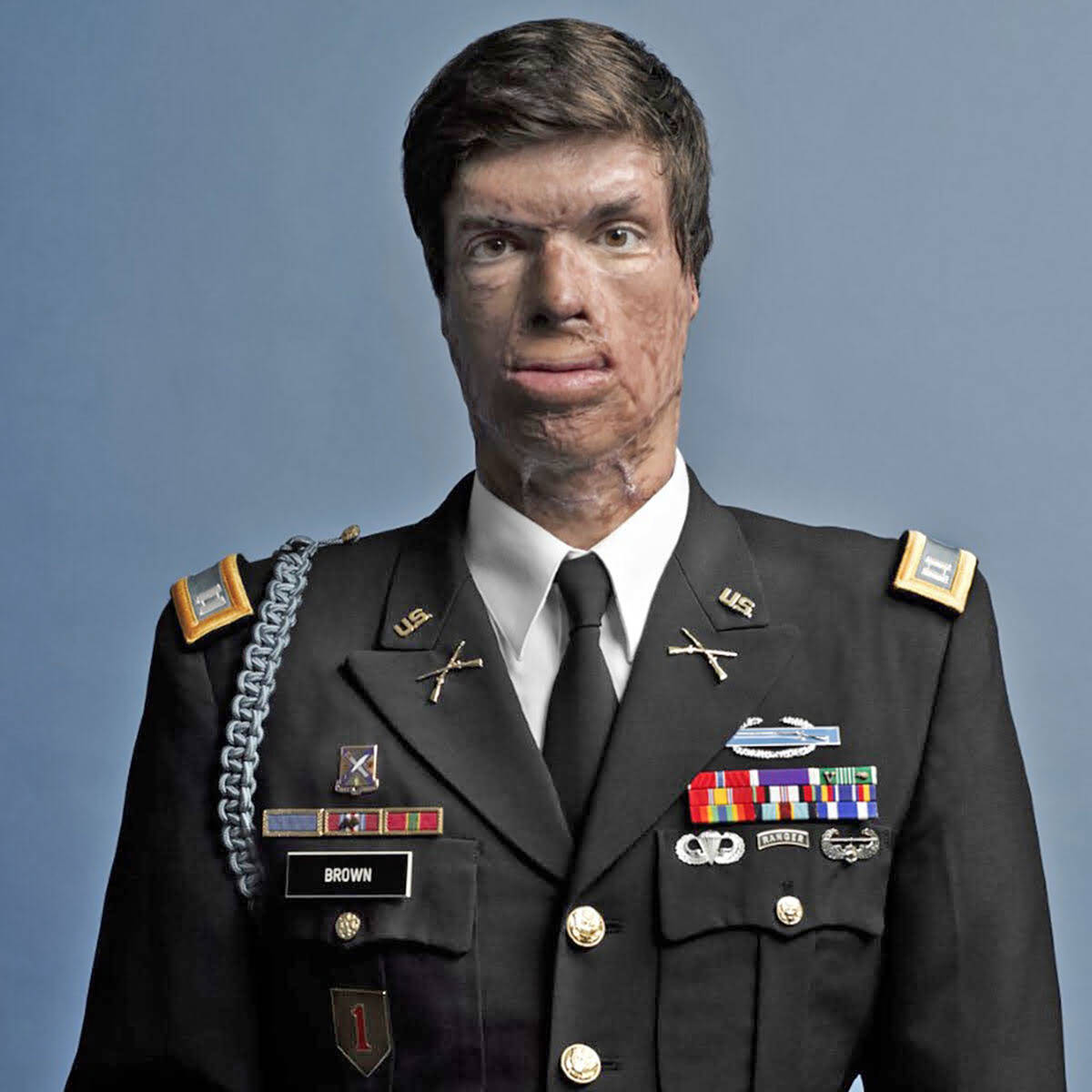 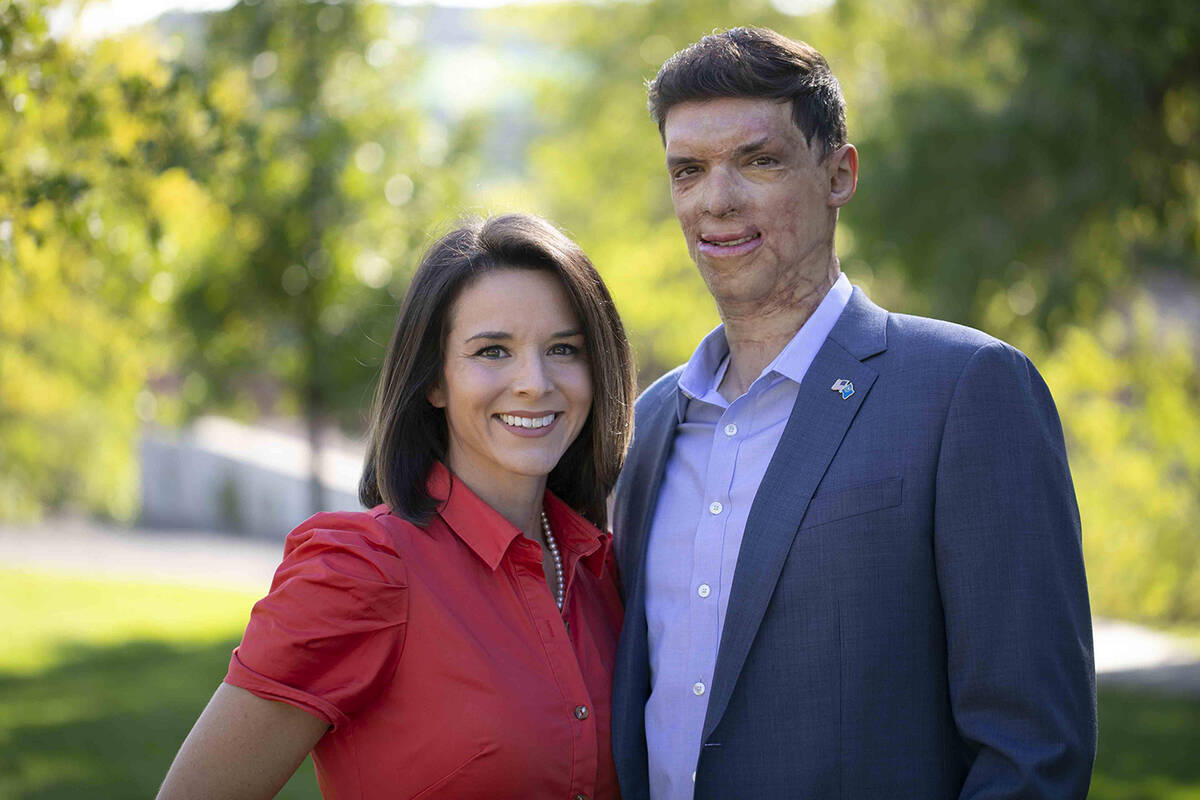 As a veteran of the U.S. Army, Capt. Sam Brown has plenty of experience in serving his country, but just because he is now retired from the military does not mean that his desire to serve has abated. Rather the opposite. Brown is now striking out into public service via the political arena and is hoping to snag the Republican nomination for U.S. Senate in the coming 2022 Nevada primary election, with the ultimate goal of unseating incumbent Democratic U.S. Sen. Catherine Cortez Masto in the November 2022 general election.

Taking to the campaign trail, Brown has been visiting with members of various communities around the state and was recently in the Pahrump Valley to spend some time with local GOP members, where he received an enthusiastic welcome.

“The event was wonderful,” Brown said of his trip to the valley to speak with the Pahrump Valley Republican Women and others, noting that there is an abundance of energy among not just the local community but all across the state.

“This is not my first time to visit with folks in Pahrump and there has been a lot of motivation, energy and a sense of purpose in the past,” Brown stated. “But after the election results in Virginia, there is almost a renewed enthusiasm that, with a lot of the things that people are concerned about, there is a pathway, there is a way to overturn some of these policies we are seeing. And that starts with electing better leaders.”

When asked why he had decided to throw his hat in the ring for this particular office, Brown replied that he simply felt it was an area that was lacking a serious, competitive candidate that could give Cortez Masto a strong challenge.

“Our Senate is really hanging in a balance and we have to take advantage of every opportunity that we have to defeat a Democrat senator,” Brown explained. “There is a need for a different type of candidate for Senate. Someone who can connect with a wide range of voters, someone who doesn’t bring in baggage of failed campaigns of the past, sort of a fresh face. I also bring along the credentials of being an everyday Nevadan. I am a small business owner, I am a veteran. I am someone who has stood up against tough circumstances and tough odds in the past and prevailed, and that is what I intend to do for Nevadans in this race.”

It’s not just his own race that Brown is focused on either. While he acknowledged that the Senate election will undoubtedly draw a bulk of the attention, he said it is just as imperative for voters to support Republicans all the way down the ballot, from the federal level to the state level right down to the local level.

When it comes to the issues, Brown has a laundry list of subjects he wants to center his energy and efforts on as a U.S. senator, ranging from lands, water and the economy to the border, health care, education and more.

“When we talk about Nevada specifically, one of the committees that is really important to me to be able to get on and have influence with is energy and natural resources because that has such a large impact on our state,” Brown said. “There is almost a heightened sense of urgency in that because the policies that the Democrats are pushing right now, through Joe Biden’s executive action, have killed our energy independence. That is a major concern of mine.”

The topic of public lands is always one rife with contention and it is one that attracts Brown’s attention, as he feels it is imperative that access to exploration on public lands be maintained and the federal government’s actions to take control of ever more local land be curbed.

He touched on the water issue as well, acknowledging that this is not one that will be simple to tackle but it needs to be taken into consideration.

The overall economic strength of the country is something that Brown is concerned about as well, remarking that Democrat messaging amid the economic flux the country is seeing is frustrating for him.

“I don’t know if it’s incompetence in the White House, in Congress, or if it is malicious and they are lying to us but there are Democrat leaders that are saying things like, ‘The way to combat inflation is to spend more money and that will help resolve things.’ That’s just not true,” Brown asserted. “It’s common sense that what they have done has created such rapid growth of inflation, it’s like an inescapable tax, especially on lower-and middle-class Nevadans.”

Brown will be running against former Nevada Attorney General Adam Laxalt, entrepreneur and former beauty queen Sharelle Mendenhall and Pahrump resident William Hockstedler, a local health care executive, in the 2022 primary. The winner of that race will then advance to the 2022 general election.