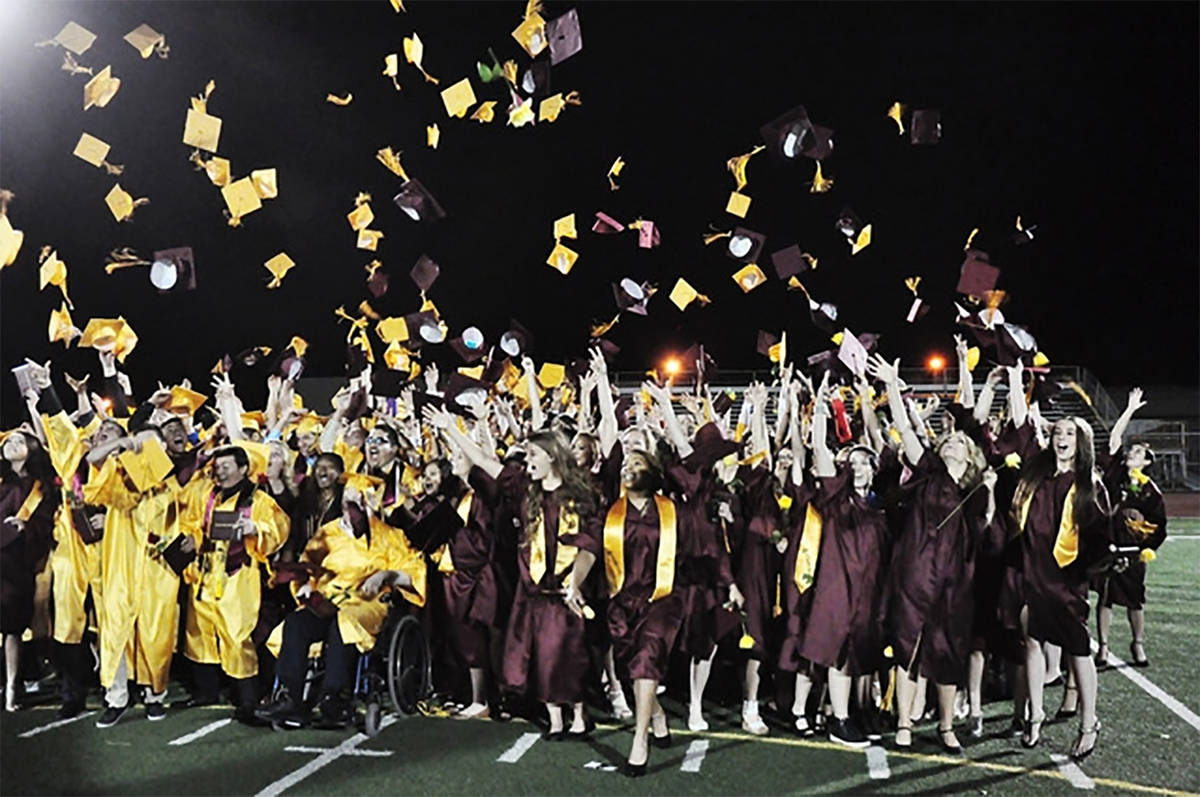 Special to the Pahrump Valley Times Pahrump Valley High School graduation coordinator Jennifer Shockley said tonight's graduating class could be the largest in school history. Between 266 and 270 seniors are expected make the walk. The graduation ceremony is scheduled for 8 p.m. 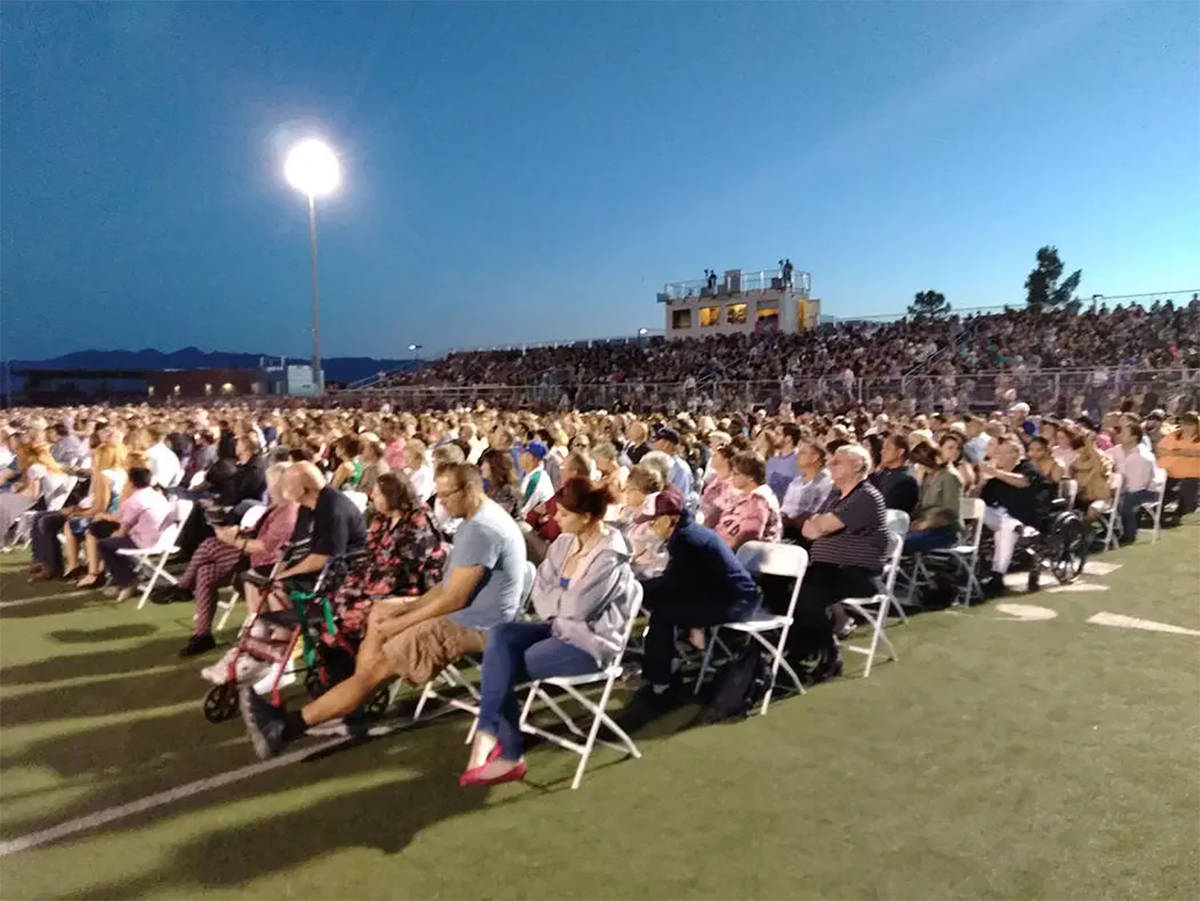 Selwyn Harris/Pahrump Valley Times As each graduate will be allotted a total of four tickets, field seating will be limited. Each family member must have a ticket for field seating, including infants and children. Tickets are not required for seating in the bleacher section.

The Pahrump Valley High School Class of 2021 could be the largest in school history.

The ceremony is scheduled to begin at 8 p.m. tonight on the football field, according to graduation coordinator Jennifer Shockley.

“Right now we might top our biggest class, so we are looking at about 266 to 270 graduates, which is a large class,” she said. “Usually we’re in the 230’s and 240’s and we just had some students finalizing things. As far as the honor grads, I want to say we’re almost at 75. This could be our largest graduating class ever.”

Shockley also spoke about tickets for family members, including children and infants, which are required to gain entrance for seating on the football field.

Each graduate will be allotted a total of four tickets.

Due to the number of people attending the ceremony, Shockley suggested for families to arrive early.

“Seating is limited this year and it usually is,” she said. “We always have those field seating tickets, because my graduating class is so large, and when we began all of this, we were still with so many restrictions and the unknown of the COVID-19 precautions. We are giving each graduate four tickets this year. Other years it’s been five or six, but when we start getting so many kids, you start getting less tickets on the field because we only have a certain number of chairs. We aren’t offering lap seatings, so infants and children will also need a ticket. A lot of times we’ll have four tickets that we give out and then we will have some families bring four other kids to sit on their laps, and hang on to other people next to them. The biggest thing that we’re trying to get out to the community, is four tickets means four tickets.”

Additionally, Shockley said aside from field seating, there’s also overflow seating available in the stands, as well as the availability to view the ceremony online.

It should be noted that tickets are not required for bleacher seating.

“We just want everyone to know please come depending on your comfort, because there will not be controlled social distancing in the bleachers,” she noted. “People may be shoulder to shoulder with you and we won’t be able to control that. We are also offering live streaming, for those that may feel uncomfortable or just can’t make it here. The live stream is going to be at nfhsnetwork.com and it is free. KPVM-TV will be offering their amazing video and they will have multiple cameras following everybody, and their video will be amazing for graduates to have as a memory. Darby O’Donnell from I.D.O. Photography will be taking pictures of the graduates, so people can just sit and enjoy the ceremony instead of having to try to stand and block other people taking pictures. We’ve got everything covered.”

Shockley also made sure to mention that the graduates’ diplomas will be available early next month.

“Years before, when we did offer the diplomas at the graduation ceremony, they got lost or stepped on because the graduates start celebrating,” she explained. “The other nice thing is that we make a full diploma packet, so our students have an official transcript to start their lives with. They have their report card, they have information on how to get their videos, and they have information where to order pictures from. They also each get a program because sometimes, no one thinks to get the graduate a program at the event.”

Shockley also wanted to remind attendees of the guidelines set in place during the ceremony, as no outside foods or drinks will be allowed.

“Water will be sold for $1 on the premises as a school fundraiser,” she advised. “Please remember there is no smoking allowed on school property, including electronic cigarettes and vaping devices. This is a formal event for our seniors, therefore, we are asking people to remain seated during the ceremony at all times. Young children are not allowed to run around on the field, so if you are bringing small children, please be sure they are able to sit for the entire ceremony.”

In summing up this year’s commencement ceremony compared to last year amid the pandemic, Shockley suggested the past month preparing for the event has been mind-boggling.

“It’s been pretty overwhelming,” she said. “I’ve waited all year to get the word. It’s been difficult finding all of our students, because we have kids that have been fully virtual all year and for all we know, they could be in Washington with a grandparent, so we’re hunting, we’re using social media, and we’re calling individuals we haven’t heard from. We have emailed every student personally, but the kids aren’t checking their emails. We also have parents not checking their emails. I’m currently down to 11 kids that I’m still trying to locate to see if they’re participating in graduation. The beginning of May is when I finally got word that we’d actually be able to offer tickets, so that’s when we first got the official word. Then two weeks later, we got the official word to open up the bleachers.”

Friday evening’s weather forecast calls for a high of 71 degrees with winds gusting up to 10 miles per hour.