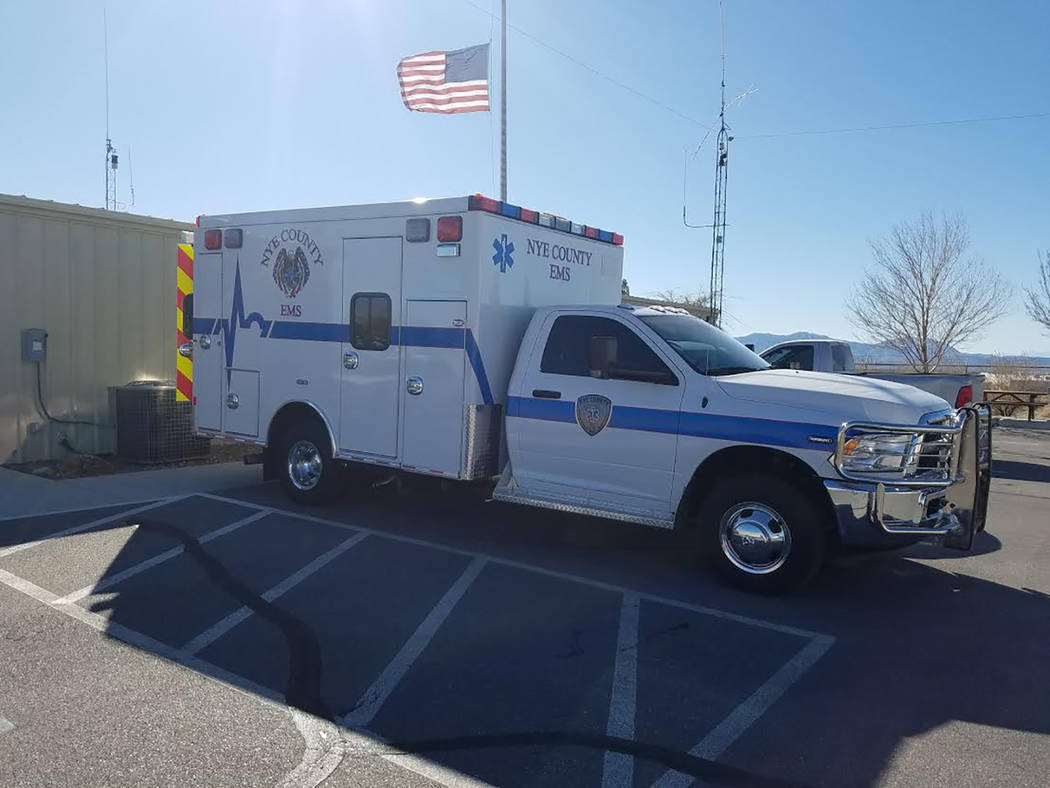 Special to the Pahrump Valley Times The new Tonopah Ambulance Service emergency response vehicle is shown parked in front of Nye County Station 51 in Pahrump. The ambulance will be available for viewing in Tonopah on March 3. 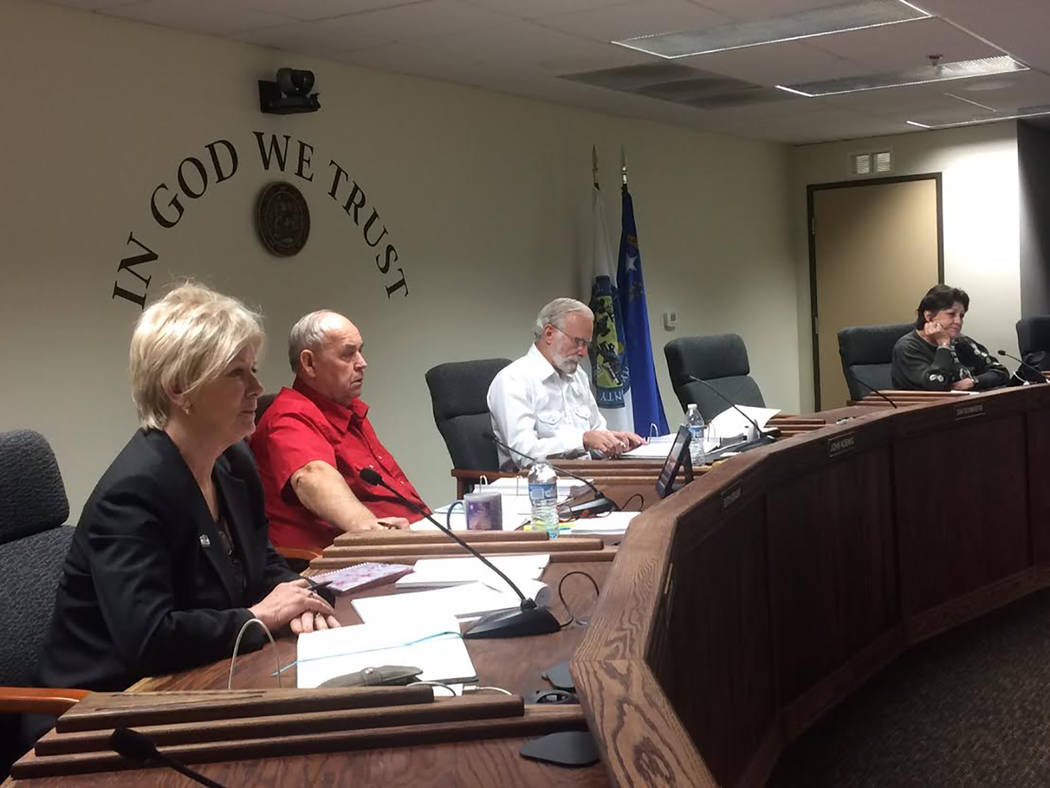 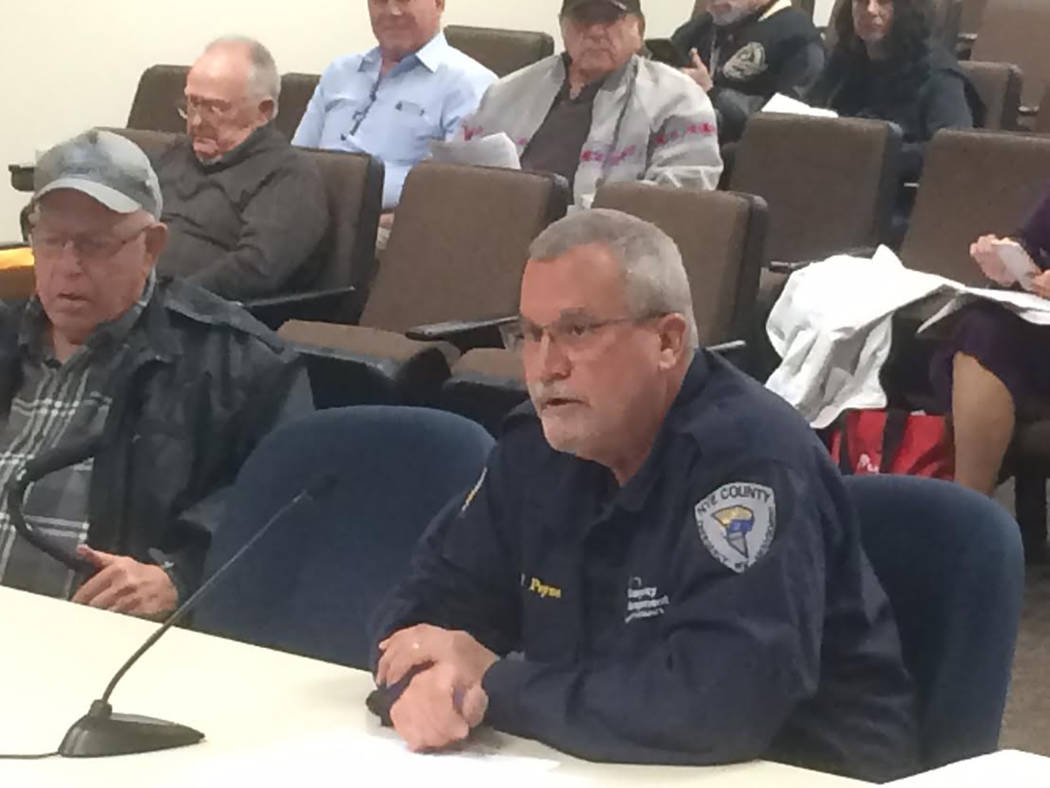 Nye County is just days away from seeing wheels on the ground for the most recent addition to the county’s emergency response vehicle fleet, a new ambulance which will serve Tonopah and the surrounding communities.

“Come share in an ‘In-Service’ ceremony!” an announcement from Nye County read. “We will be putting a new ambulance in service for Tonopah Ambulance Service, the first new ambulance in 13 years! Thanks to a generous donation from SolarReserve and the dedicated work of Nye County Finance and the Nye County Board of County Commissioners!”

The new ambulance will replace one that was totaled in a crash in October 2017. Following that accident, SolarReserve stepped forward and offered $100,000 toward the purchase of a new ambulance for the Tonopah area.

In addition, the Nye County Commission approved entering into a $400,000 medium-term loan which, together with the SolarReserve donation, was allocated for the purchase of a total of three new ambulances.

The first of the recently purchased vehicles is now nearly ready to roll and will begin serving the Tonopah community on Saturday. The In-Service ceremony will take place March 3 at 10 a.m. at Tonopah Station 11, located at 209 N. St. Patrick St. All those interested in attending and getting an up-close and personal look at the new emergency response vehicle are welcome to join in.

Status of the ambulance service

The new vehicle will be put to use by the Tonopah Ambulance Service, which staffs the operation with the help of volunteers. This service has been in a pinch for years, however, struggling to maintain operation with a bare bones volunteer force. The situation has become so strained that Nye County Emergency Management even decided to send one of its staff members to Tonopah to provide a bit of relief.

Payne first focused on the cost of providing an emergency management staff member, noting that the county has spent $25,849.59 thus far, not including the salary of the staff member who has been assisting with the ambulance service since late December 2017, which was already budgeted.

“So as you can see it is getting up there pretty quick,” Payne told commissioners. “We’re going to have to do a follow-up with you. We are still crunching the numbers to determine at what point we begin to endanger our carryover, going into the new fiscal year.”

However, it was not all bad news that afternoon and Payne did have some positive information to impart.

“In Tonopah itself, in just the last 48 hours or so, we have seen a marked improvement in coverage on the calendar, which was refreshing to see,” Payne explained. He noted that an Emergency Medical Technician class has already started and that could also help with the situation.

“We have a class that has already started in Tonopah. We are hoping to glean some new EMTs from that. If everybody that starts it passes it, we could have as many as 10 new EMTs come out of that,” Payne stated, remarking that the typical pass rate for such a class was about 40 percent.

Nye County Commissioner Lorinda Wichman added another positive note as well. “With the signed contract with REMSA and the plans that they have with their (community) paramedics, they advertised for five positions and they have over 15 applicants for those five positions, all of which are very qualified, all of which want to be a resident in Tonopah,” she said.

Reno-based REMSA is the Regional Emergency Medical Services Authority which, along with Renown Health of Reno, have been working with the Northern Nye County Hospital District to assist in remedying the medical services problems in and around Tonopah. The hospital district recently approved an agreement with REMSA to provide community paramedics, which is hoped to help alleviate the strain on the ambulance service.

“Having that information come to the hospital district from REMSA and Renown is creating some enthusiasm that I think is starting to build in that community, knock on wood. I hope it continues,” Wichman stated.

“The paramedic can respond to a call. They don’t transport, they are not responding with an ambulance. But they are responding with a piece of equipment that, and I know this is oversimplifying, but they are basically taking a unit to the call that can act as an emergency room. And they have telemedicine on board so it is a whole new frontier idea of how to run emergency responses. It’s pretty exciting.”