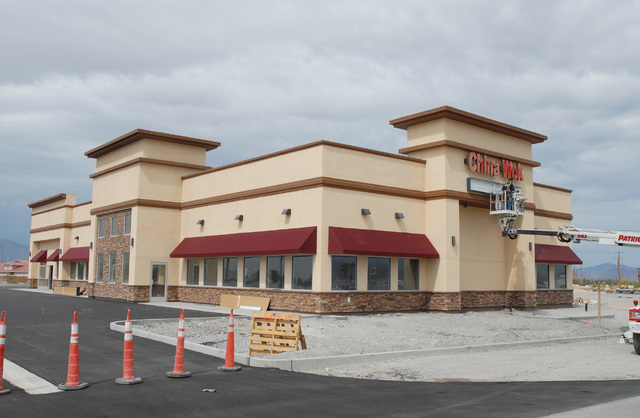 The building is complete, the interior is furnished from the ceiling to the floor and all fans of Chinese food are wondering when the new China Wok Buffet &Grill will open the doors.

Contractor Andrew Jordan said last week the building and safety department had asked for some extra grading at the rear of the property which sits on the Frontage Road next to Wells Fargo. Jordan said yesterday that the grading had been completed and the final inspection was scheduled for Tuesday.

Bill Browning of Nye County Building &Safety said he knew the work had been done and said there were a few changes to the plans he needed before he could sign off on the new restaurant.

“It’s not a big thing, no big deal. They should be opening soon.”

China Wok owner Jinfu “Jeff” Shao said he is already set to make the move. “We were planning to close for two days so the employees could get acclimated to the new restaurant but I can’t get the phones changed over until Monday, Sept. 8.

Shao talked with his chef and the decision was made to close the old China Wok on Dahlia Street at 7 p.m., Sunday, Sept. 7. The location will remain closed Sept. 8 and the new restaurant will open at 11 a.m. Sept. 9.

Customers can expect the prices to have increased to accommodate all the new menu choices. There will be a grill station where patrons can pick ingredients and choose the style of sauce. The grill master will cook it for you there.

Also added is a sushi bar. Shao said the buffet has added items as well. The price of the meal is all-inclusive just as it is on the Dahlia Street location but Shao said weekday lunch will be $7.49 and dinner will be $9.49 Monday through Thursday and Sunday and $10.49 Friday and Saturday.

The new location has banquet facilities as well so it can accommodate large parties and club dinner meetings.

No beer or wine will be served. Shao said he will decide later about an application.

What about the old China Wok? The restaurant space will be closed for at least two months for remodeling and some renovations. Shao has taken on a partner to reopen that location as Thai Coconut Bay.

Sugar’s Shack, the fried chicken and cowboy steakhouse at the Stagestop. opened Sept. 1 to a full house.

Owner Sharlee Horvath said the restaurant opened at 4 p.m. and all 64 seats were filled until about 8:45 p.m. She laughed, “We close at 9.”

Horvath said there were no complaints and the chefs, line cooks and servers performed beautifully.

“It got out to social media that we were open and my cell phone started dinging the posts and comments on Facebook. I finally set the phone down and walked away.

She said customers were taking photos of their dinner plates and letting all their friends know where they were.

“I was happy, but it was crazy in here.”

The Stagestop is located at 100 Stagecoach Road off of Blagg Road.