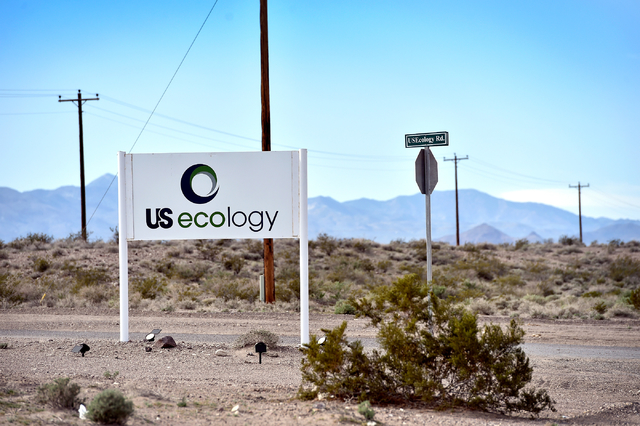 David Becker/Las Vegas Review-Journal The entrance to US Ecology is seen on Tuesday, March 1, 2016, near Beatty.

A plume of white smoke spotted this month at a hazardous waste dump south of Beatty was harmless steam, according to company officials and state regulators.

The US Ecology waste storage facility made headlines in October 2015, after an explosion and fire in a closed landfill for low-level radioactive waste forced the closure of nearby U.S. Highway 95.

On Nov. 6, a passing motorist on U.S. 95 saw a large white cloud rising from the facility 110 miles northwest of Las Vegas and stopped to snap a picture of it.

US Ecology General Manager Bob Marchand said the plume was “simply steam coming off of one of our treatment processes. There was no releases of any hazardous constituents.”

According to the Nevada Division of Environmental Protection, the steam was released during a treatment process to neutralize a tanker of acidic liquid waste.

“The resulting water vapor was notably visible due to the cold morning temperatures,” said JoAnn Kittrell, spokeswoman for the agency.

Kittrell said the facility’s permits do not set limits for such steam releases, but “the facility has been advised to generally control mixing operations to the extent possible to avoid the generation of excessive reaction plumes.”

She said the water vapor isn’t harmful, “especially not to anyone driving by on the highway,” but workers at the site do wear full protective gear. “It is hot,” Kittrell said.

The 2015 explosion and fire occurred on a now-closed, state-owned portion of the waste dump, sending debris sixty feet into the air and scattering damaged 55-gallon drums around the crater, including two that landed outside the fence.

Investigators later traced the cause to rainfall that seeped through a compromised cover and reacted with metallic sodium.

The incident forced the highway to close for almost 24 hours and raised questions about the integrity of the aging dumpsite.

From 1962 through 1992, US Ecology and its predecessor, Nuclear Engineering Co., operated the dump on state land leased to the companies as one of the few disposal sites in the United States for low-level nuclear waste.

US Ecology continues to operate a 40-acre landfill for hazardous waste adjacent to the 40-acre radioactive waste landfill, which closed for good on Jan. 1, 1993.