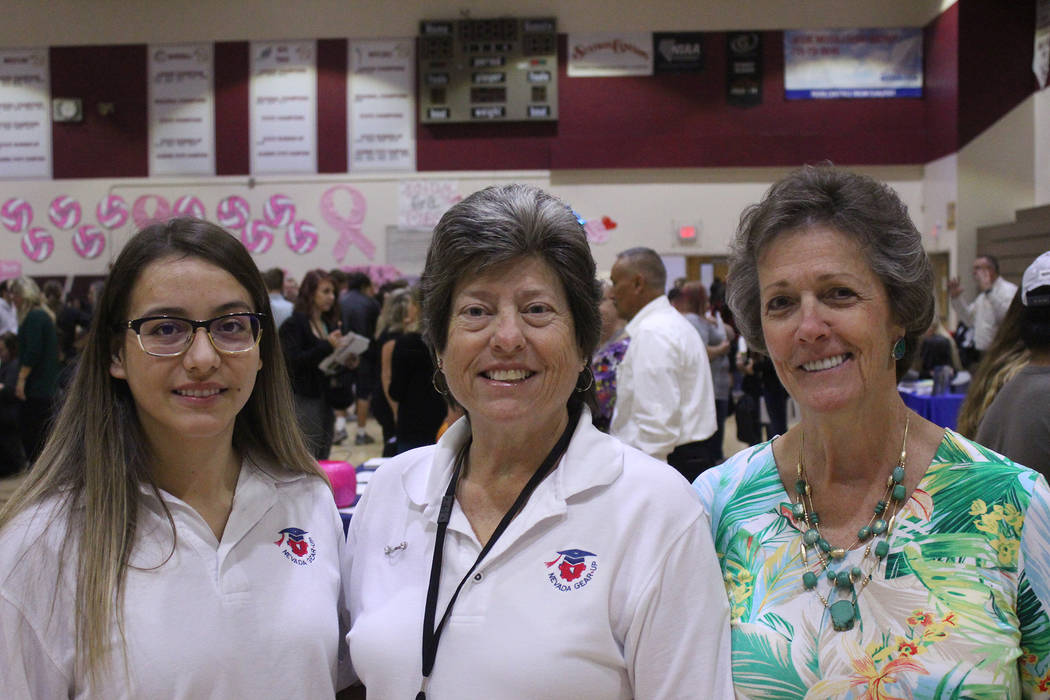 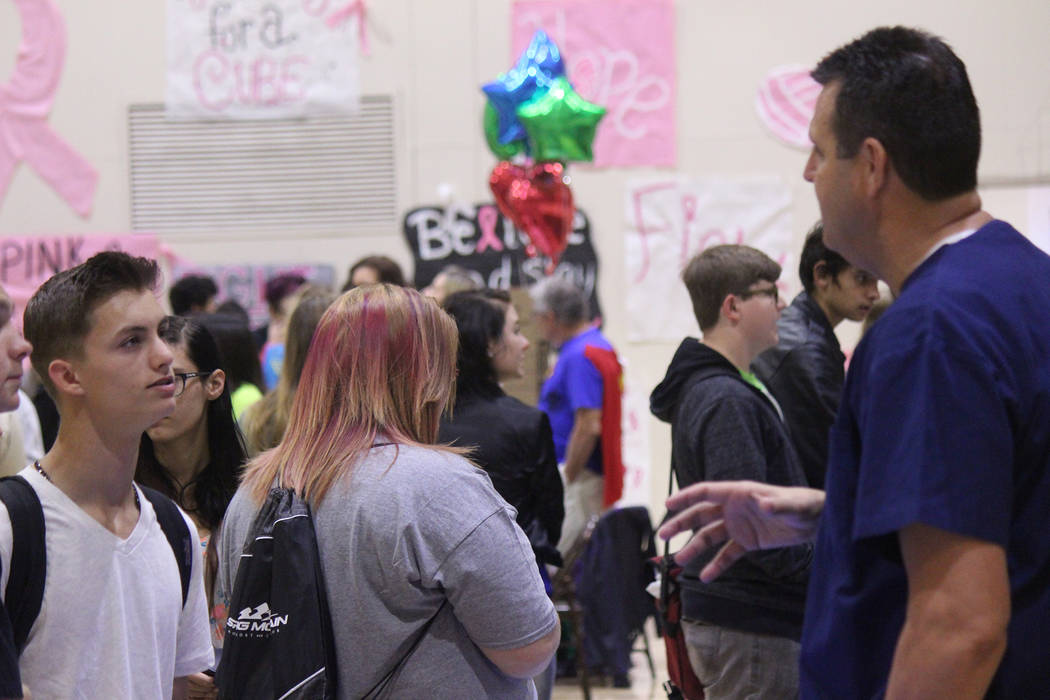 Jeffrey Meehan/Pahrump Valley Times Dozens of students from across Nye County swept through Pahrump Valley High School's gymnasium this fall for the annual college and career fair. Several area employers, colleges and universities and technical schools from Nevada and beyond and others set up a table to share what opportunities are available after graduation. 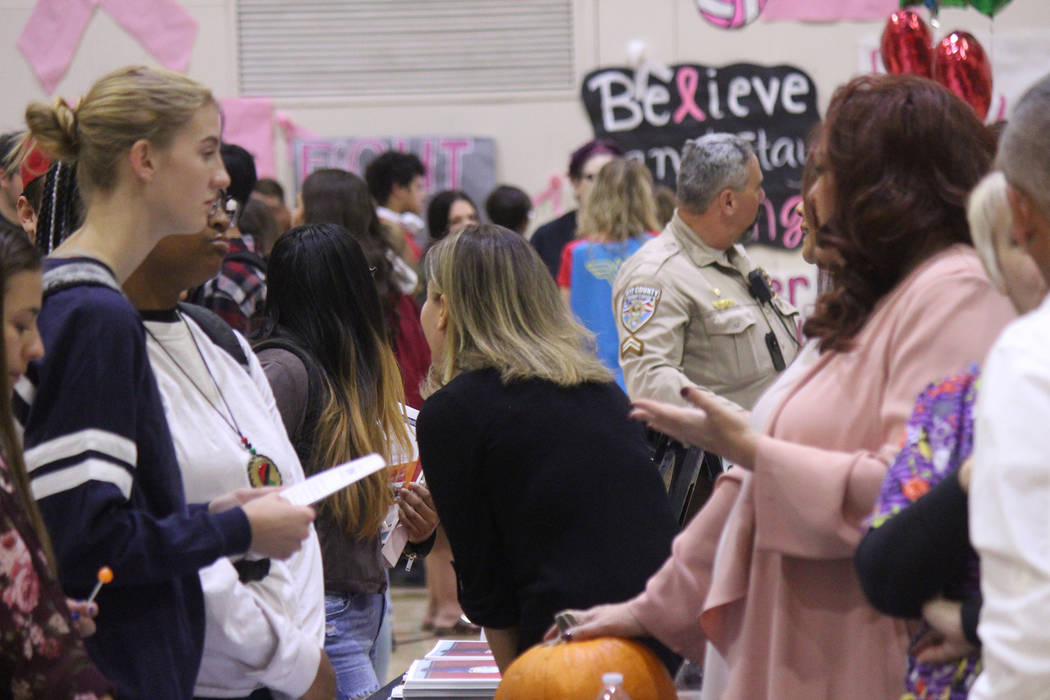 Students from across Nye County swept through Pahrump this fall to learn about the future opportunities in the workforce and through universities in the state and beyond during a college and career fair at Pahrump Valley High School.

The event, produced by the high school’s Nevada GEAR UP (Gaining Early Awareness and Readiness for Undergraduate Programs) office and 12th grade counselor Carlah Luck, brought out students from all over Nye County, including Beatty, Tonopah and Pahrump Valley to meet up with local companies, regional universities and technical schools and others.

The event, which was held in Beatty prior to coming to Pahrump in 2017 due to its centralized location, was moved further south to accommodate the town’s large student population and more colleges, according to Lisa Hamrick, GEAR UP site representative at Pahrump Valley High School.

Representatives from large employers from Pahrump were at the event.

Bonnie Stolzman, chief nursing officer from Desert View Hospital, was there representing the hospital at the Oct. 24 event.

Stolzman was there to display educational programs available in health care at universities across the state and what opportunities are open within a hospital, which isn’t always about being a nurse of doctor and dealing directly with patients.

Stolzman explained that opportunities extend to such fields as engineering and others.

The variety was wide as far as the types of companies and universities that were in attendance to promote their opportunities. Beyond the local hospital, employers such as Valley Electric Association Inc., the Nye County Sheriff’s Office and others set up booths at the fair.

Multiple colleges and universities set up shop to promote their options and opportunities to a room full of potential future students, both in Nevada and beyond: University of Nevada, Las Vegas, College of Southern Nevada and University of Montana Western, just to name a few.

The number of companies, universities and others that set up tables at the event filled most of Pahrump Valley’s auditorium.

Rudy Arbabi, admissions representative for the Universal Technical Institute, was also in attendance. Arbabi said he’d been coming to the Nye County event for 14 years to recruit students to the school that is geared toward auto repair and collision and other related areas.

Luck said the event coincided with a similar event that occurs in Las Vegas. By doing so, this helps to attract more out-of-state universities and colleges to the Pahrump event, since representatives are already in the region.

Hamrick and Luck also talked about the benefits of the Nevada State GEAR UP program.

“We help prepare students for the college life, the work life, the technical and trade schools and the military,” Hamrick said.

The program follows students from the seventh grade until they graduate high school.

“We’re in the middle school to start preparing them, a little bit, to give them an idea of what they might do as they get older, give them opportunities like college visits and speakers and give them all kinds of information that they might need to prepare them for the transition to high school,” Hamrick said.

Students in schools that have a GEAR UP program have other benefits such as helping pay for fees for college applications and fees on retaking the ACT test. The program brings together things like instruction events on how to fill out the FASFA (Free Application for Federal Student Aid), among other similar events.

A state requirement calls for juniors in high school to take the ACT. But students can retake the exam and get a higher score, which can lead to more scholarship opportunities and bypassing having to take remedial coursework in college.

The program also has a list of other benefits for students.

Hamrick said the GEAR UP program works on a grant that runs out after the 2018-19 school year, though she hopes it will be extended for future classes.

Hamrick and Luck said they would like to think the program had an impact on Pahrump Valley High School’s higher-than-average graduation rates.

At Pahrump’s high school, 93 percent of students graduated in the 2016-2017 school year with Beatty, which also has a GEAR UP program, at 100 percent. The four-year graduation rate district-wide was 79.3 percent.

This was much higher than the rate across the state as a whole.

Four-year graduation rates across Nevada were just over 80 percent for the 2016-17 school year.