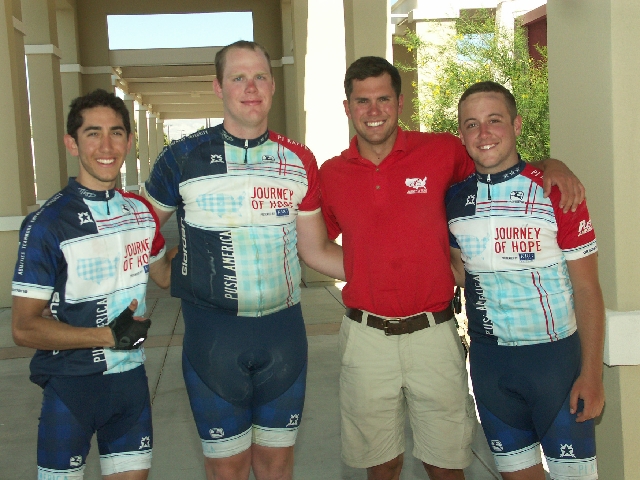 For many college students, summer break is a time to relax, unwind, and eventually contemplate the upcoming fall semester.

Some students even manage to volunteer a few hours of their time each week to help others.

Even rarer are those who sacrifice their entire summer to do some common good for society.

Last week, more than 20 students from around the country gathered in Long Beach, Calif., to do just that.

Their mission is to travel more than 3,000 miles to raise funds and create more awareness for people living with disabilities around the country.

The group of young men are part of an organization called “Push America/Journey of Hope.”

All are trekking from coast to coast to deliver their message of inspiration in what is known as “friendship visits.”

The trip is about a five-hour flight or several days driving in a car, but these intrepid travelers are doing it on bicycles.

They lodged at Pahrump Valley High School for the evening following an 80-plus mile ride from Baker.

“We are a team that consists of members that work for Push America and we are the only fraternity who own and operate its own philanthropy. There are three groups making the journey this year. The Transamerica team starts in Seattle, and the North team starts in San Francisco. We are the Southern team that started in Long Beach. The cyclists are two-by-two and we actually meet up with the other teams about six miles outside the capitol building in Washington, D.C. It will be a huge double-pace line when we all arrive there together,” he said.

Petko also noted that every precaution is taken to ensure the safety of the cyclists as they make their way east.

He said several tracking vehicles are also deployed to accompany the riders.

“We constantly update our location each day and a lot of the guys have GPS systems on their bike computers which are pretty sophisticated. You can actually find yourself anywhere. We have 10 crewmembers that help direct the cyclists along the roads and they each have different responsibilities. They also have social media responsibilities where they update family members and other followers on our ‘Flickr’ website account,” he said.

The cyclists come from all different walks of life.

He said he began training for the ride last year.

“I thought it would be awesome to do it and now I’m here. I had to first get myself familiar with my bike. There are people who are a little better than others but we are a team and we try to help each other and stick together. It’s been pretty fun to say the least,” he said.

Matt Berlin, a student at Central Michigan University, said it was his first year taking part in the event.

“Last year I saw how everyone was very emotional and inspired from this and I thought it sounded pretty cool. Not long after that, I signed up for it. I bought my bike in March, read up on the event, and started training. It’s really about the people with disabilities and bringing awareness to them,” he said.

He said he spent the past year raising money to make to trip.

“In order to go on the trip you have to raise at least $5,000 and that money goes to these organizations to support people with disabilities. I’ve been cycling for about six months and it’s been really tough but you find that you meet someone that gives you that second wind when you need it the next day,” he said.

Petko, meanwhile, said so far, there have not been any mechanical or health problems while traveling though one of the hottest parts of the world during the hottest time of the year.

“We haven’t had anything too serious. It’s usually when tires get out of true and they start wobbling a bit. After miles and miles of heat and rain, the chains also wear down so chain replacement is pretty common. This part of the country is not the most cycling friendly location on the map. People are pushed to a different limit and everyone reacts differently to the heat out here. We are all trained in first aid and we are CPR certified. It never really gets to that point but heat exhaustion is the number one thing. We just pull them off the bike and get them rehydrated and all set for the next day,” he said.

Petko also explained why the team chooses early summer to make the trip.

“It’s actually the only time of the year that we are all available. We are all college students from the same fraternity and we can’t miss any school so it works out best this time of year for all of us,” he said.

Push America Chairman Kristofer Book said the organization has taught him much about his own character.

“Spending time with people with disabilities and working with Push America has been the biggest eye opener of my entire life. Learning these lessons, I have no one else to thank other than the people who I thought I was going to teach a lesson to, where instead, they taught me a lesson,” he said.

Push America is a 501(c) (3) nonprofit organization established in 1977 by the Pi Kappa Phi fraternity to support people with disabilities.

To date the organization has raised millions of dollars for its cause.

Through fundraising and sponsorships, the event raises more than $600,000 annually.

If all goes as expected, Petko said all three groups are scheduled to arrive in the nation’s capitol by mid-August.