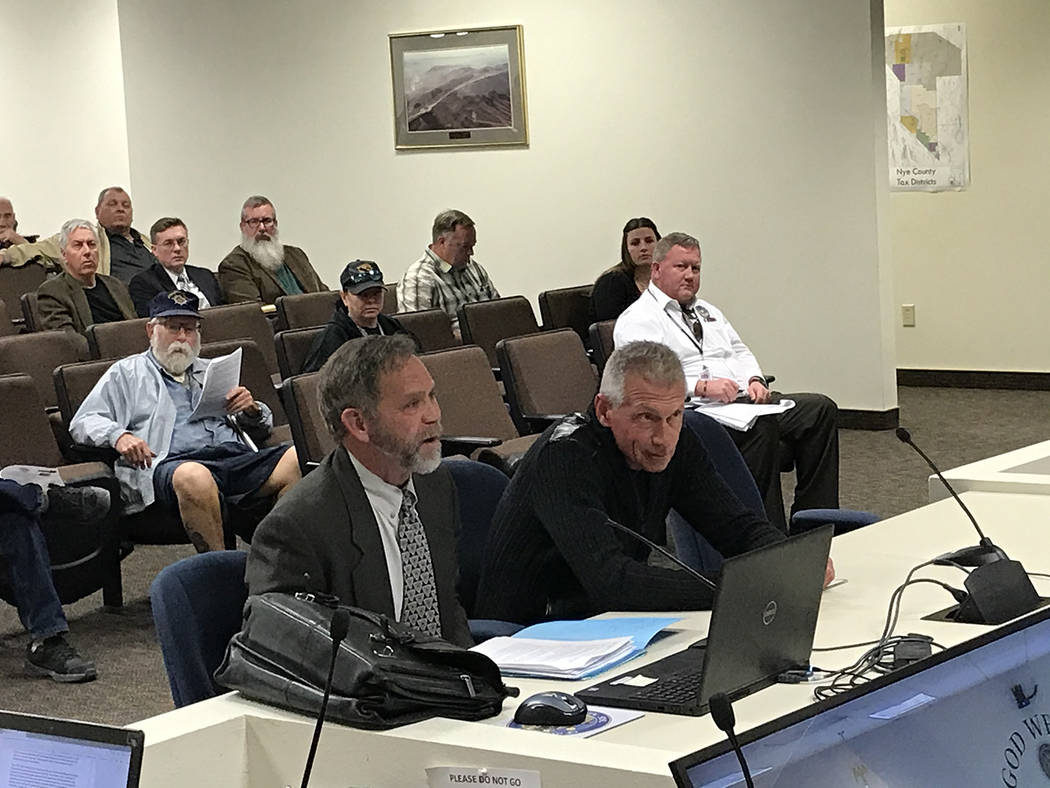 Robin Hebrock/Pahrump Valley Times Attorney Tom Gibson, left, and commercial kennel operator Vasili Platunov are pictured at the Nye County Commission's Feb. 19 meeting, at which Platunov's appeal over the most recent denial of a kennel permit was rejected. 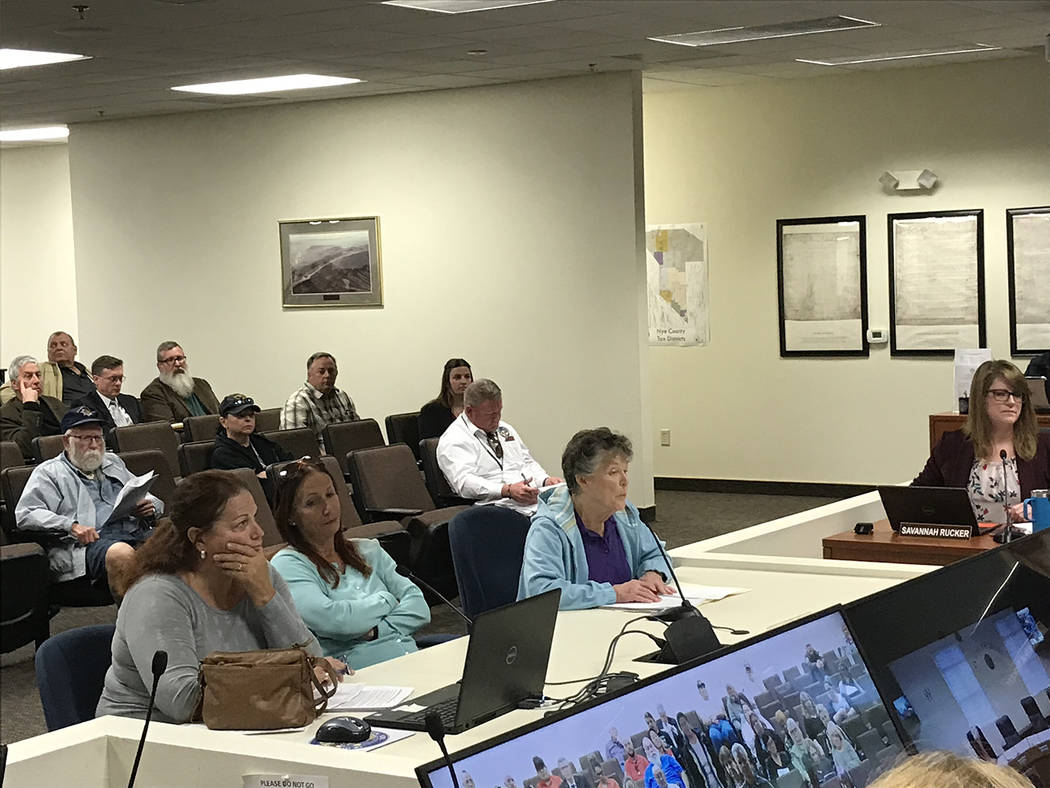 Robin Hebrock/Pahrump Valley Times Several residents of the south end of Pahrump turned out for the Feb. 19 appeal hearing regarding the kennel in their area to express their extreme frustration with the situation that has lasted for many years.

Residents near the area of Homestead Road and Bond Street are hoping to finally see some relief of their longstanding frustrations about a large-scale commercial kennel operation in their neighborhood, with kennel operator Vasili Platunov once again denied permission to house a large number of sizable canines on his property on the south side of Pahrump.

Originally permitted in 2010, the commercial kennel is located at 2790 E. Camellia Street on a 2.3 acre parcel zoned Rural Estates 2. The property was only allowed to contain up to 30 dogs, but over the years, the numbers just kept growing. By 2015 Platunov was required to apply for a conditional use permit to allow for a total of 150 canines to remain on his property. That permit application was denied by the Pahrump Regional Planning Commission, triggering a saga that has now stretched on for more than four years.

In January 2016, Platunov had an appeal of the planning commission’s denial heard by the Nye County Commission, which gave him six months to remove the dogs. Instead of doing as he was directed, Platunov decided to file once again for a permit to allow him to house more than 30 dogs, which was also denied. Another appeal followed in Jan. 2017, and this too was struck down.

That was when Platunov decided to file a lawsuit against the county, claiming his kennel operation was grandfathered. The lawsuit was eventually kicked out of federal court due to circumstances surrounding a criminal charge against Platunov from the state, leading to the current situation.

With his lawsuit at a dead end, Platunov attempted once more to apply for a conditional use permit, this time for up to 200 dogs. That application was denied by the planning commission in December 2019, prompting yet another appeal to the Nye County Commission.

Tom Gibson, an attorney representing Platunov at the Feb. 19 meeting, began by stating, “We have had a substantial change of circumstances since the matter was before the planning commission.” Gibson explained that he was finally able to obtain documentation to show that Platunov had secured an offer from someone who was interested in purchasing all 200 of his dogs.

“But it’s going to take six months to a year to get them transitioned out,” Gibson said, causing many to roll their eyes at the echo of the same request made in 2016, when Platunov was in fact given six months to remove his dogs, a timeframe he did not adhere to.

Nye County Commissioner Lorinda Wichman interjected to state that it was her understanding that when hearing an appeal, the commission is not authorized to consider new evidence. Nye County Deputy District Attorney Marla Zlotek confirmed that was correct but Gibson continued to push for the commission to review the new documents. This went nowhere however.

Gibson returned to an argument that has been made many times before, asserting that Platunov’s property was grandfathered.

Nye County Commissioner Debra Strickland jumped in to explain that grandfathering only applies to items built and in operation prior to county code changes, adding that Platunov had not built his kennel immediately when buying his property. Koenig noted that grandfathering also goes out the door if the manner of use changes at all, as it did when Platunov decided to increase the number of dogs.

“And after 30, where do you draw the line?” Strickland questioned, with Koenig remarking on the size of the dogs and the complaints from neighbors about the smell and outrageous amount of noise.

Gibson responded that he felt the issues were not as bad as people were making them out to be, a statement that elicited derisive laughter from those who had spoken against the appeal.

Cutting straight to the point, Wichman then asked if Gibson was implying that the RPC had failed to follow proper procedure when addressing the most recent permit request. Gibson replied that he believed the documents he had with him that morning could have changed the minds of some of the planning commissioners. That might be all well and good, but Wichman did not feel that was an adequate reason to overturn the planning commission’s decision.

She then made a motion to affirm the planning commission’s decision to deny the permit, seconded by Strickland. Nye County Commissioner Leo Blundo asked what would happen with the dogs and Wichman stated that Platunov would be required to remove them, adding that if he does not do so, he could be held in contempt of court and jailed until he complies.

The motion to affirm the denial passed 5-0.

After the vote, Gibson stated, “Well that will tie things up in court…” to which Wichman retorted, “Now that we have been threatened with court, I think we are done with this item. We need to move on.”