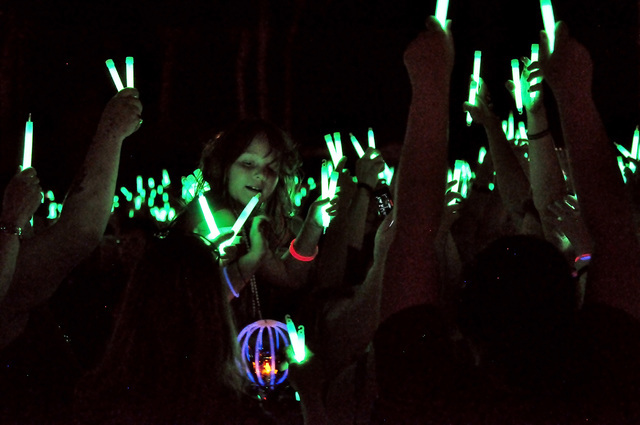 More than 1,000 people attended a 9/11 remembrance ceremony hosted by GI USA business on Sunday evening in the Albertson’s parking lot. Thousands of glow sticks were given to families and individuals to hold aloft in memory of the tragedy. Horace Langford Jr./Pahrump Valley Times 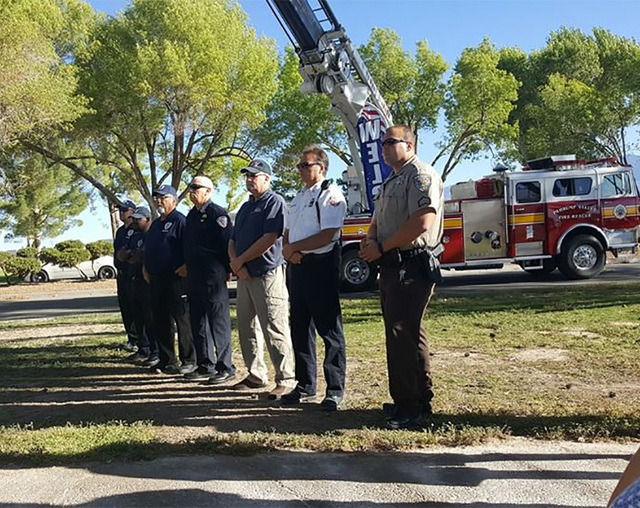 Pahrump and Nye County first responders take part in the unveiling of the new Sept. 11 Reflection Area at the Calvada Eye on Sunday. The event, hosted by the Pahrump Valley Rotary Club, was one of several in town held to remember and honor those who lost their lives 15 years ago. Special to Pahrump Valley Times

Several weekend observances around the community served to remember and reflect on the 9/11 tragedy 15 years ago.

“I thought it was a wonderful event and the people who came out appeared to have a great time even though it’s a poignant remembrance of those who lost their lives 15 years ago.”

Though the primary purpose of the ceremony was to honor those who died, Cindi Vroenen said an additional component provided a vision attendees would long remember.

Thousands of glow sticks were given to families and individuals to hold aloft in memory of the tragedy.

Additionally, Vroenen said an effort was also made to break the Guinness Book of World Records for the most glow sticks assembled in one location.

Attendees were also amassed to replicate the two World Trade Center towers in the parking lot.

She is still trying to determine if the effort was successful, as at least 2,788 glow sticks were required to reach the record.

The total number is still being tallied from sign-in sheets.

“Judging from the pictures, it looks like we got very, very close,” she said. “The record was not about how many people showed up but how many glow sticks were lit. I am pretty sure we got more than the 2,788 needed to break the Guinness Book of World Records. I think we got about 1,900 to 2,000 people who showed up, but this function was not about getting into the record books.”

Sunday’s event, Vroenen said, would not have been possible without the efforts of volunteers who helped to organize the ceremony.

Members of several area veterans groups, along with Kiwanis Club and the high school’s JROTC program, provided their time and support.

“I especially want to sing the praises of Lt. Col. Patrick Nary from the high school’s JROTC program,” she said. “At times it was a bit difficult organizing it, but for the most part, everybody knew what to do. They knew our goal was to reconstruct the towers and Mr. Nary took command and got the job done, which is exactly what we needed.”

Vroenen also spoke about a spontaneous moment at the event when those holding the glow sticks began singing patriotic songs without a cue.

“When that happened, my heart just melted,” she said. “That wasn’t scripted at all. It was just a spontaneous moment among the attendees here.”

Along with the ceremony, participants were provided with prizes, gifts, and complimentary food items.

“My landlord flew out and catered Dickie’s Barbecue, Port o’ Subs and Albertsons,” Vroenen said. “She even ordered more when she got here just to make sure we didn’t run out. This was a team effort. I also want to thank the many volunteers who came out to assist us in this effort.”

Earlier on Sunday, officials with the Pahrump Valley Rotary Club, along with more than 50 guests, dedicated the newly-constructed Sept. 11 First Responders Reflection Area at the Calvada Eye.

Rotary President Ryan Muccio said the project was completed just in time for the Sept. 11 observance.

“We were very happy to be able to provide this memorial for the community and first responders,” Muccio said. “We were blessed to have a great crowd on hand for the entire time from 8:36 a.m. to 10:07 a.m. We rang a bell and observed a moment of silence for each tragic event during the 911 attacks.”

Lewis said he and his department appreciated the community outpouring to area first responders.

“Pahrump Valley Rotary Club did an awesome job with the establishment of a reflection area in the Calvada Eye duck pond, addressing the medical, the fire and law enforcement agencies in this area,” Lewis said. “It was a really nice job and thoughtful gesture.”

Muccio meanwhile, also said officials at Valley Electric Association held a First Responder’s appreciation dinner as well as distributing recognitions for individuals in each of the agencies.

“Along with a plethora of the local first responders, County Commissioners Dan Schinhofen and Frank Carbone were also in attendance,” Muccio said. “The county was very generous in allowing us to build on that spot. It is a very beautiful area and it will be a permanent fixture for many years to come.”