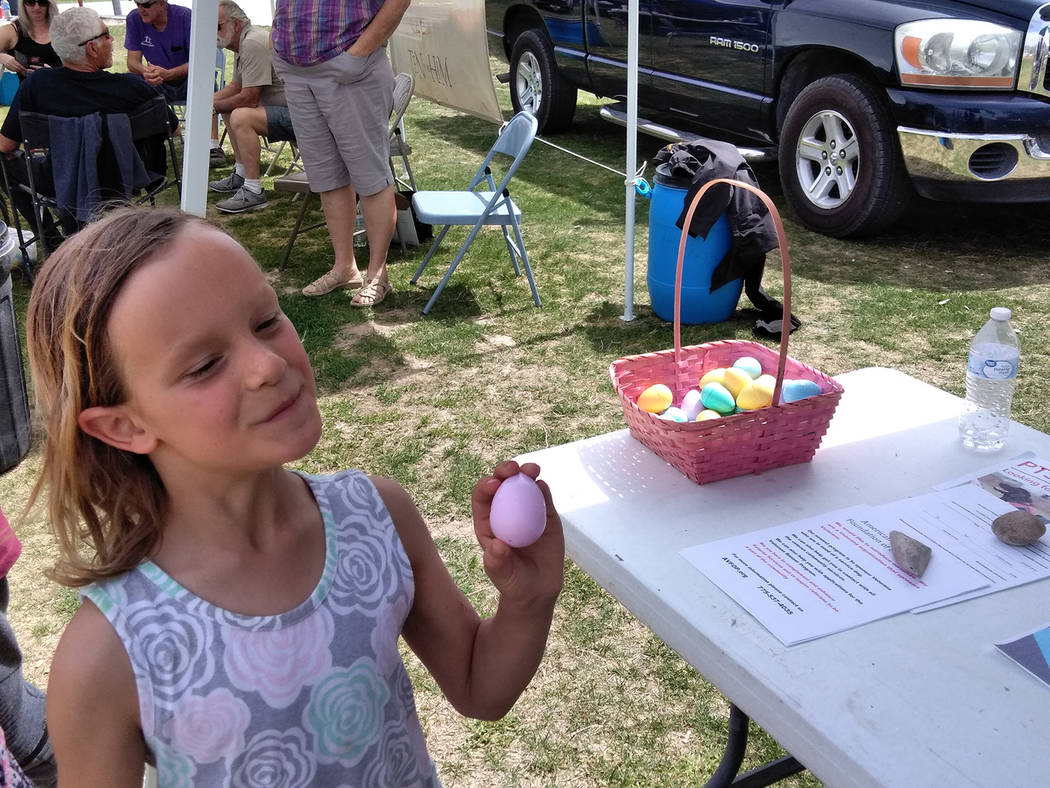 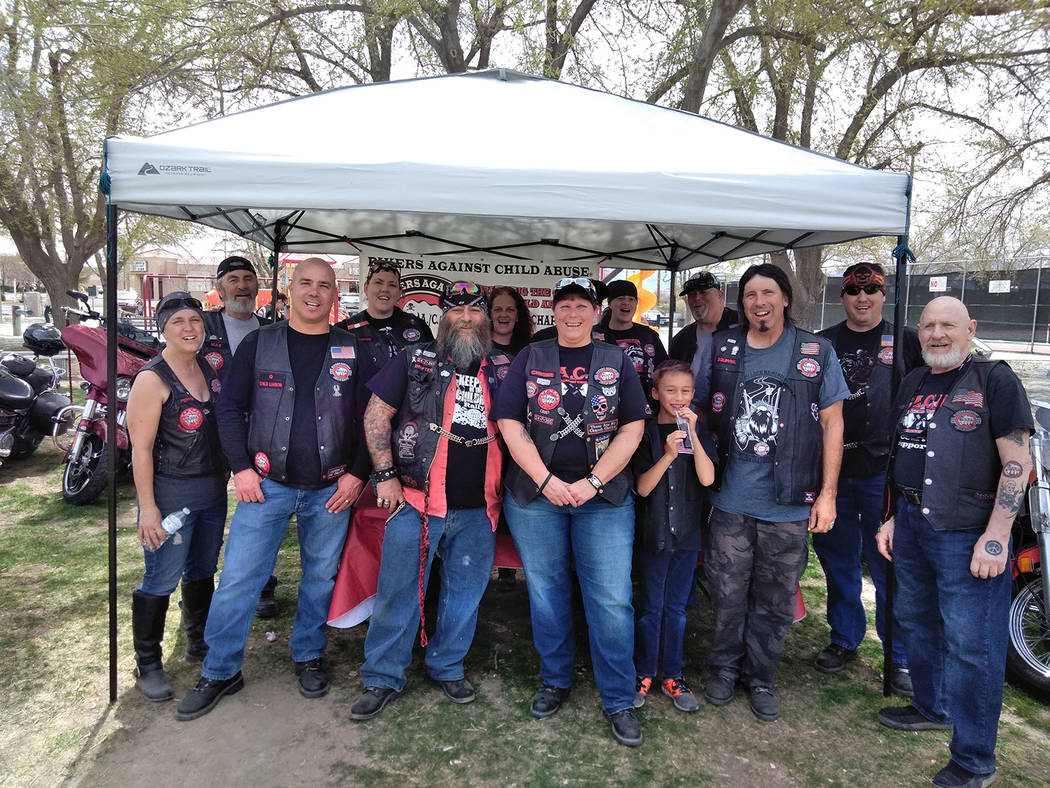 Selwyn Harris/Pahrump Valley Times The booth consisting of members from Bikers Against Child Abuse, or "BACA," was a very popular attraction at the Easter Day picnic. “Chrome,” front and center, said several BACA members made the ride from Clark County to attend the annual picnic on Saturday. 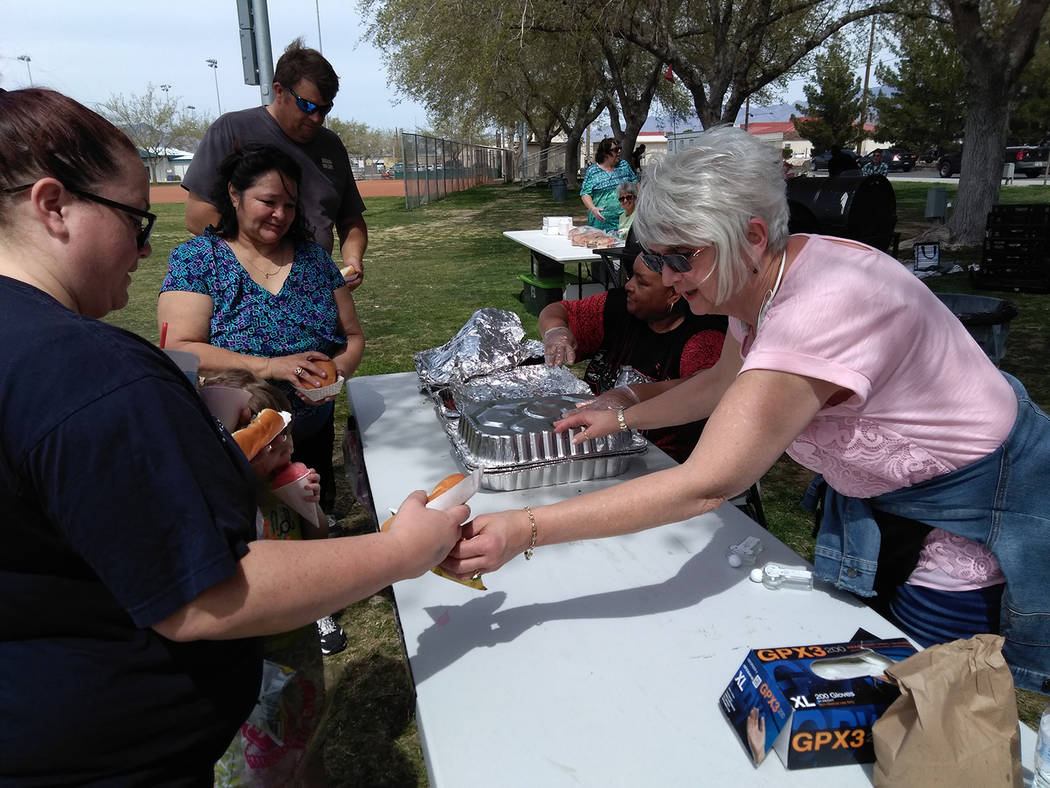 Selwyn Harris/Pahrump Valley Times More than 1,200 hamburgers were grilled up and served up, courtesy of volunteers from NyE Community Coalition's Holiday Task Force. Organizers thanked the numerous volunteers who participated in the annual event. 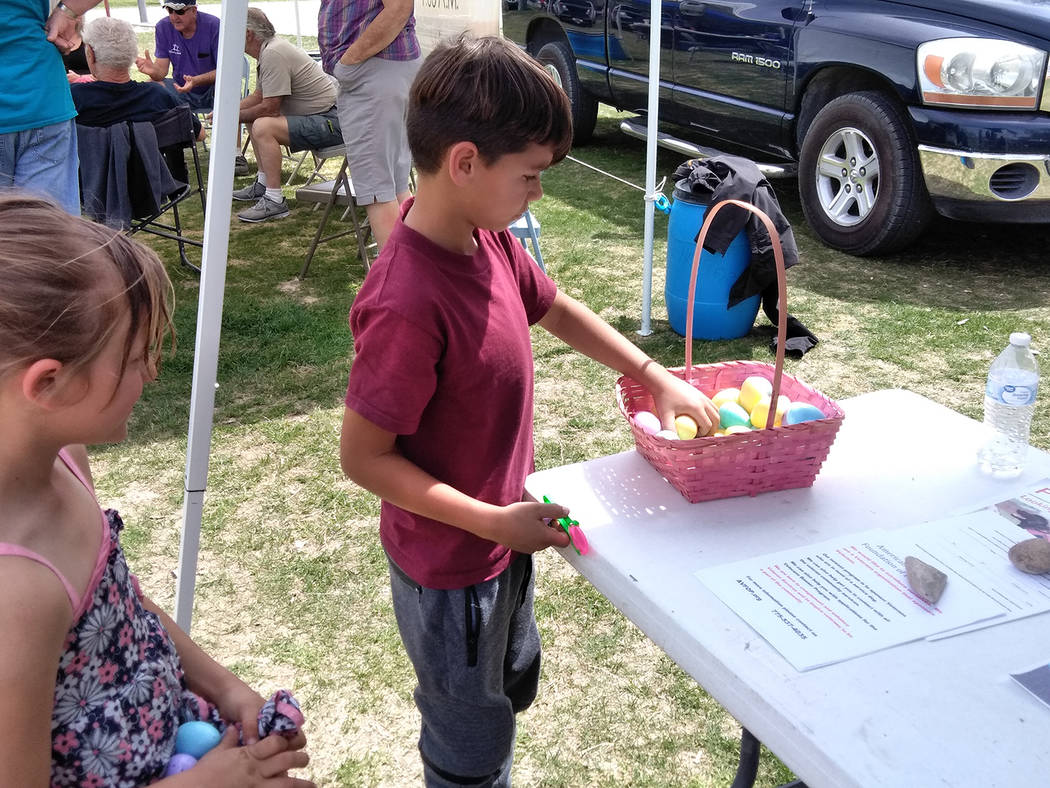 Selwyn Harris/Pahrump Valley Times Abandoning the traditional Easter Egg Hunt, organizers opted for an "Egg Scramble," where kids would visit the various booths in the park to collect their colorful lot. Pleasant weather conditions according to organizers, contributed to the strong turnout. 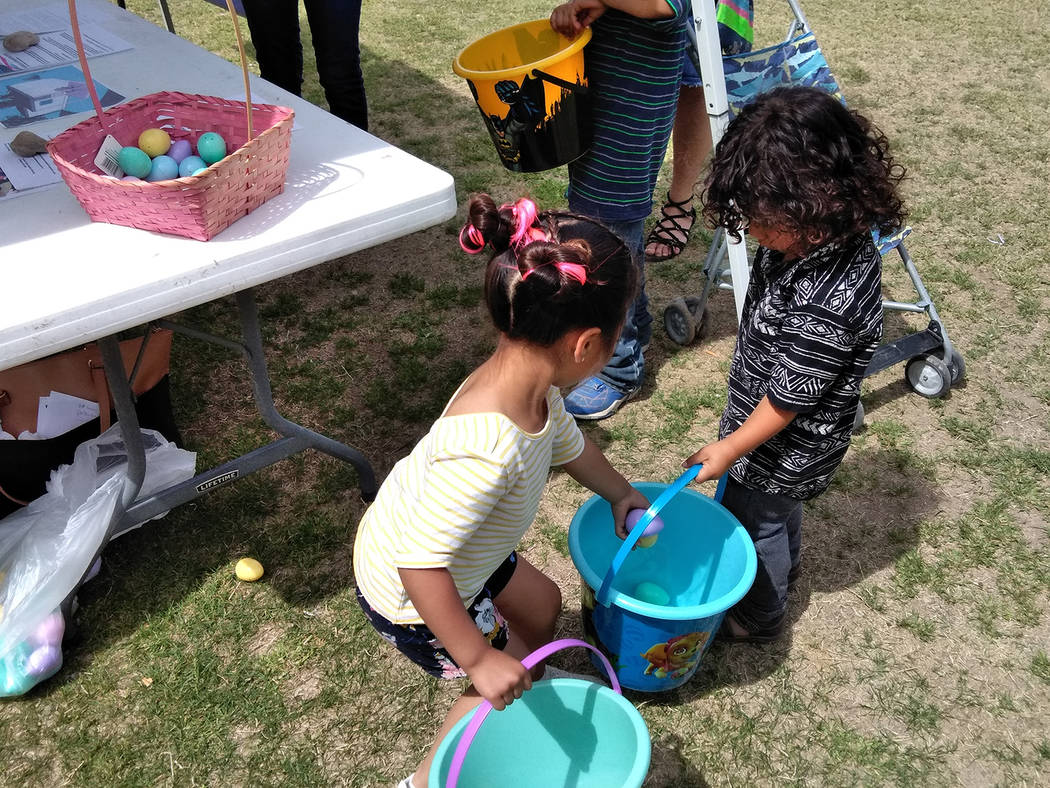 Selwyn Harris/Pahrump Valley Times Siblings help one another amass as many eggs as possible while traipsing around Petrack Park during Saturday's Community Easter Picnic. The free event, was hosted by area organizations, including the Pahrump Disability Outreach Program, (PDOP), NyE Communities Coalition and the Coalition’s Holiday Task Force Committee.

“It was a great turnout and we had a lot of people come by the park,” organizer Linda Wright said. “We served a lot of food and all of the kids were enjoying it. It was also just a beautiful day. The folks at PDOP, actually ran out of cotton candy and kettle corn. The Holiday Task Force Committee would like to give a great big thank you to everyone who brought food to donate for the canned food drive at the picnic. Those items will be distributed to our local food pantries. It was a very good day.”

You can’t really call it a picnic, unless hot dogs and hamburgers are up for grabs.

That responsibility fell upon the shoulders of Paul Miller from the Holiday Task Force.

“We had a total of 1,200 hamburgers and I think we only had a box left when all was said and done,” Miller said. “I would say there was easily over a thousand people that we served. The attendance was great and we were really surprised. I think a lot of it had to do with the real pleasant weather that we had over the weekend.”

A walk in the park

The purpose was to allow the younger children to collect as many of the coveted eggs as the older kids.

That portion of the event is known as the “Egg Scramble,” where children walk the park and collect an egg from each participating agency.

Of the more than 20 agencies at the park on Saturday were a band of individuals clad in T-shirts, black leather, boots and bandanas.

They are also known by their respective nicknames, such as Wrench, Drifter, Hope and Chrome.

BACA, according to its international mission statement, exists with the intent of “creating a safer environment for abused children.”

All about community service

Beaming against the backdrop of the numerous children frolicking at the park, “Chrome” said several BACA members made the ride from Clark County to attend the annual picnic on Saturday.

“Our Nevada Chapter services all of Nye County and Southern Nevada,” she said. “Our main headquarters is out of Las Vegas, but we have members that live here in Pahrump, so, if they need us here, we are here.”

Additionally, Chrome noted that as of the past several years, BACA members have been working harder on getting their message out to communities in Southern Nevada.

“We have ventured out because a lot of us have moved out here to Nye County,” she said. “We just want to let the community know that we are here and we are available for the kids.”

Regarding the picnic itself, Chrome said the reaction among the kids throughout the day was very positive.

“It was just great to see all of the kids running around the park with their Easter baskets,” she said. “We had numerous kids come by our booth. They love us mainly because we offer temporary tattoos and stickers along with the Easter eggs as well as some candy. We let them sit on the bikes and their parents took pictures. We were here last year as well and it was awesome.”

Miller, meanwhile, said the community picnic in his opinion was another very successful event.

“It was a totally friendly and happy Easter atmosphere for the kids, who were out doing their egg scramble,” he said. “I think it was one of our better Easter events that we’ve had over Easter weekend.”

Miller also issued a few thanks to the local organizations and agencies who played a role in this year’s community picnic, including the Pahrump Disability Outreach Program and the Nye County Sheriff’s Office, for assisting with the setup and post-event cleanup.

Papa Pita, the Law Offices of Glen Lerner and Heathco Distributing were also major contributors to this year’s event.

“I also want to thank the volunteers from the Holiday Task Force and from Nye Community Coalition who came out to assist us,” he said. “I’d also like to thank Anne Blankenship at the Pahrump Senior Center for allowing us to use their distributor for all of the hot dogs, hamburgers, and chips.

“That was really great of them because it saved us a lot of money. I may have done a lot of the grill duties, but Linda Wright is the front person on all of this. A lot of people were very helpful and it was just an outstanding flow of dedicated people in service on Saturday.”