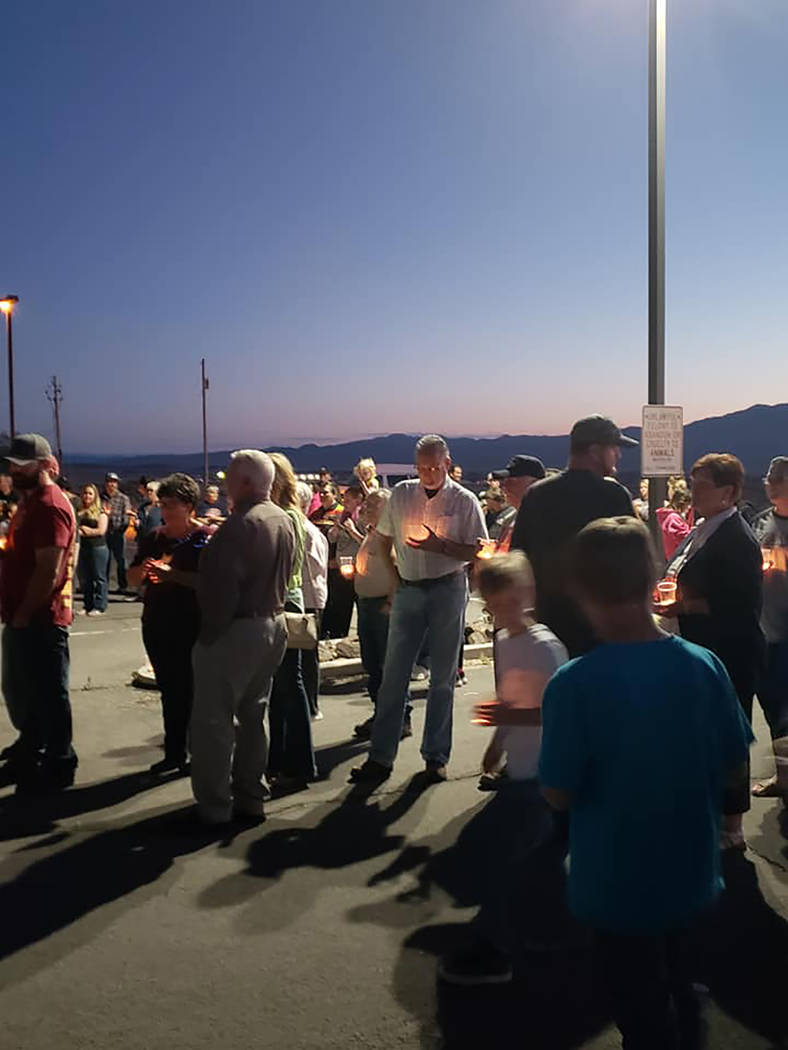 Esmeralda County Sheriff's Office A crowd gathers at a candlelight vigil for Nye County Sheriff's Sgt. Duane Downing on Monday, May 28 in Tonopah. Downing was injured while directing traffic at a fire scene on May 21. He remains hospitalized. 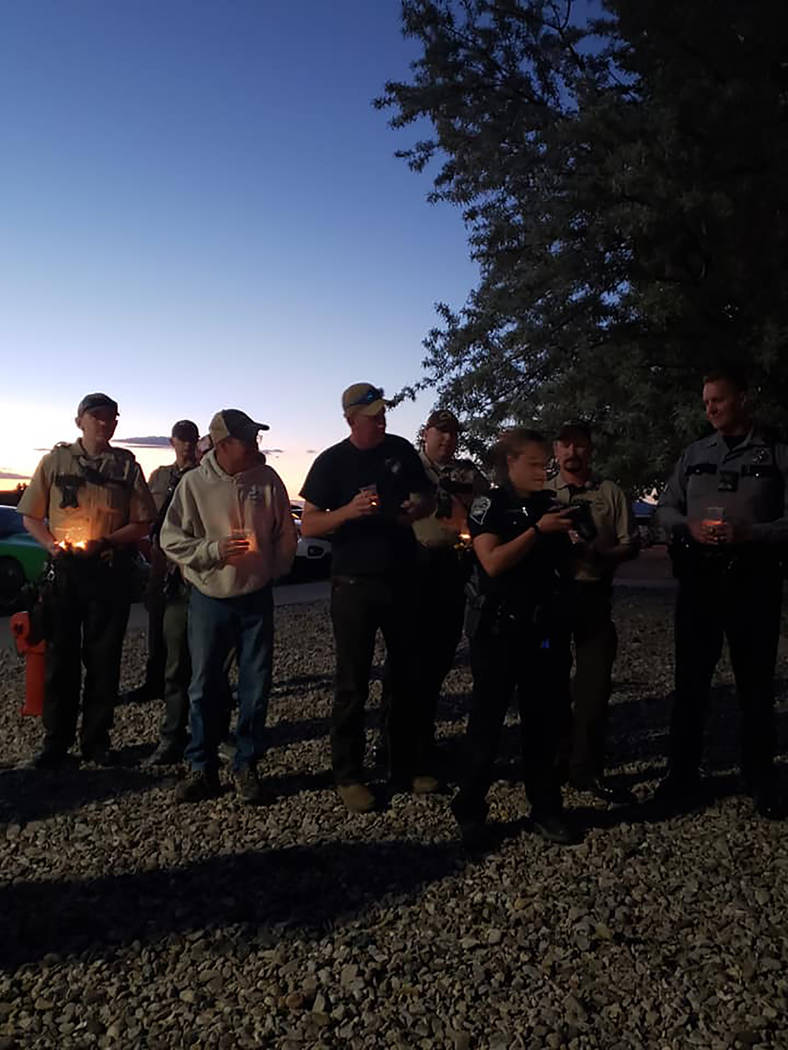 Esmeralda County Sheriff's Office Law enforcement officers gather at a candlelight vigil for Nye County Sheriff's Sgt. Duane Downing on Monday, May 28 in Tonopah. Downing was struck by a vehicle on May 21 while he was directing traffic at a fire scene in Tonopah. He remains hospitalozed. 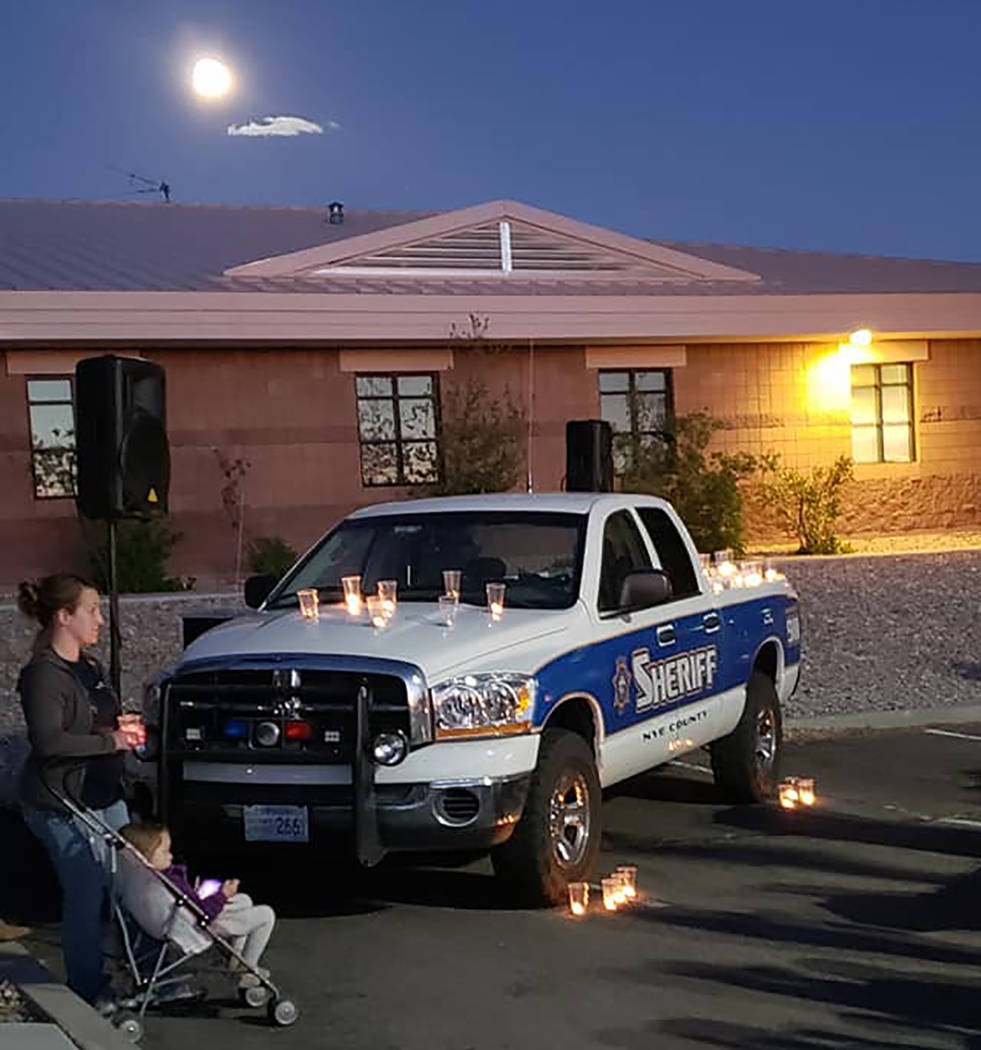 A vigil was held this week in Tonopah for Nye County Sheriff’s Sgt. Duane Downing, injured May 21 when he was struck by a vehicle.

Downing, who remained hospitalized, had been directing traffic at a car fire scene in Tonopah, where he also is town board chairman.

The vigil was held May 28 at the sheriff’s office parking lot off Radar Road in Tonopah.

“Thanks for the continued support for him and our agency,” the sheriff’s office said in a Facebook post. “Your prayers and love for him is just what he needs. Thank you to everyone who attended.”

Downing’s sheriff’s vehicle, a pickup truck, was illuminated with candles at the event. Downing is being treated at University Medical Center in Las Vegas.

Downing was injured the night of May 21 after being hit by a vehicle while responding to a commercial vehicle on fire along U.S. Highway 95 near the intersection with Magnolia Avenue in Tonopah, the Nevada Highway Patrol reports.

Downing was struck by a silver 2008 Chevrolet Cobalt sedan in the southbound left-hand travel lane, the NHP said, citing a preliminary investigation.

The Chevrolet Cobalt driver, who has not been identified, is cooperating with the investigation, the NHP said. Impairment is not suspected in this crash, the NHP said.

Witnesses or anyone with information on the collision is asked to contact Sgt. Karen Garretson of the NHP’s Multi-Disciplinary Investigation and Reconstruction Team at 775-687-9618 or kgarretson@dps.state.nv.us Refer to NHP Case #180502056