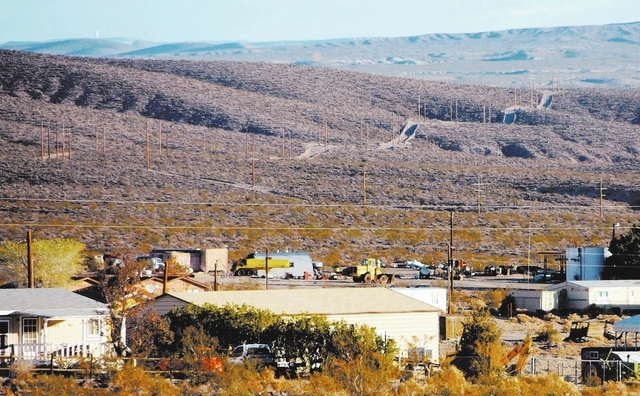 The construction of a Valley Electric Association power line from Beatty to Tolicha Peak to serve the Nevada Test and Training Range is nearing completion, without any disputes or fanfare, though the project was temporarily suspended due to environmental concerns.

It’s unlike the improvements VEA is making to serve the Nevada National Security Site (NNSS), where NV Energy asked for an order before the Nevada Public Utilities Commission that the cooperative had to pay an exit fee and file for a Certificate of Public Convenience and Necessity.

After a number of hearings and filings, the PUC denied NV Energy’s request. Valley Electric is building a new 5.3-mile, 138-kilovolt transmission and Innovation Substation off the newly-completed Northwest Transmission Line from Pahrump.

The PUC is still scheduled to consider whether they have jurisdiction to consider the Mercury switching station improvements.

Construction of the Beatty to Tolicha Peak power line began last spring. The new power line is expected to be completed and in service by summer 2014 after the brief shutdown. VEA will reduce the number of single pole structures from 378 to 326 and will construct a narrower maintenance road 14 feet wide instead of 16 feet.

VEA will not construct three miles of the planned maintenance road to avoid sensitive cultural areas and not construct any staging areas within the right-of-way, originally seven stage areas were planned.

The Beatty to Tolicha Peak Project was the subject of an environmental assessment by the U.S. Bureau of Land Management Tonopah Field Office. The project consists of removing portions of an existing distribution line and constructing a new, 24.9-kilovolt double circuit distribution line from the Beatty substation to Tolicha Peak Air Force facilities on the west side of the Nevada Test and Training Range. About 20.5 miles of the power line is located on public land, about 19.6 miles of the power line runs parallel with Highway 95, it would continue for about 11 miles on lands managed by the air force.

VEA submitted a plan of development for the power line Feb. 8, 2011. An environmental assessment was completed the following month; the BLM issued a finding the project would have no significant impacts on April 26, 2011.

But when VEA told the BLM about proposed refinements to the engineering and construction, a suspension notice was sent to Valley Electric on July 3, asking it to cease any work on the H double-pole structures and the use of helicopters to install them until the changes were evaluated under the National Environmental Policy Act.

Recommended changes were made by the Avian Power Line Interaction Committee. The committee recommended adequate spacing between conductors; shield wire would be grounded at regular intervals and bird diverters and covers used when needed.

The structures will be 45 to 70 feet high, with about 18 per mile. The H-frame structures were installed in the hilly terrain, they allow longer wire spans, several locations in culturally sensitive areas required longer spans. Most structures would have a span length of 325 feet.

In a reference to the shooting out of the main 230-kilovolt transmission line from Las Vegas to Pahrump in January 2007 that plunged Pahrump into darkness for 12 hours, VEA is proposing to use gray polymer insulators, which are lighter, easier to install, have a longer service life and aren’t as easily damaged by gunfire.

The updated environmental analysis said, “the construction and operation of the project provides more reliable power to the customers using the line, including the USAF.” It would require VEA to install a small, 10,000-square-foot distribution substation and transformer.

“The overall project would provide reliable, cost-effective electrical energy and communications service to the northwest boundary of the NTTR in an effort to support the Department of Defense missions within the NTTR,” the environmental assessment stated.The BLM cited their mandate under the Federal Public Lands Management Act to manage public lands for multiple uses in a manner that recognizes the nation’s need for reliable electrical energy distribution and support a viable and effective defense system.

The project includes the installation of 21.5 miles of fiber optic line to the new distribution line which provides the U.S. Air Force and VEA with longer distance distribution of communications data, the environmental assessment states that fiber optic line was required by the air force.

Corvus Gold, which has plans for a gold mine north of Rhyolite, paid VEA to allow the company to hook up to the new improvements.

When asked for a comment, VEA was mum about details of the project, including the cost or a timetable for completion.

In a terse statement, the co-op related: “Valley Electric Association was asked by the U.S. government to respond to a request for proposals to provide service to the U.S. Air Force at a facility within VEA’s service territory in Nye County. VEA was happy to be awarded the contract to provide electric distribution and energy services to the facility. VEA is now fulfilling this contract. As a result of the terms of VEA’s agreement with the U.S. government, we are not in a position to provide any additional details about the contract.”