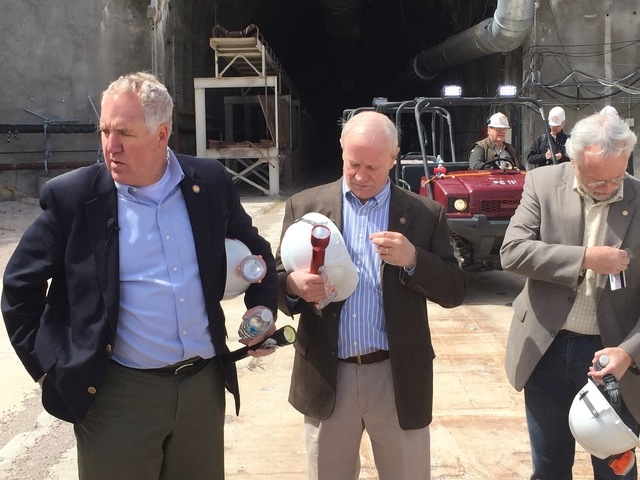 Two congressmen are renewing efforts on Yucca Mountain with a letter where they addressed the “obligation” for the Department of Energy to complete licensing for the project.

A letter penned by Fred Upton, R-Mich., and John Shimkus, R-Ill., for U.S. Secretary of Energy Ernest Moniz on March 17 stated that Congress and the Subcommittee on Environment and the Economy chaired by Shimkus had examined issues associated with developing a comprehensive solution for used fuel management policy.

The letter said that while the Department of Energy had undertaken steps to implement its “Strategy for the Management and Disposal of Used Nuclear Fuel and High-Level Radioactive Waste,” the federal government must fulfill statutory obligations as soon as possible.

“Expeditiously resuming work on the Yucca Mountain license application would do just that,” the letter reads.

“I view this letter as an exercise in optimism, to see if they can get any useful information from DOE at a time when DOE is not actually working on Yucca Mountain,” Halstead said.

Shimkus and Upton also recently asked the U.S. Government Accountability Office (GAO) to examine what would be necessary for DOE to fulfill its “obligation” to complete its work on the Yucca Mountain license application.

Halstead said that the DOE has no clear obligation to do so.

“Our understanding of the law as we have been advised by our legal team is that there’s no legal obligation for DOE to move forward on the license application either as soon as possible or in the language of the letter expeditiously,” Halstead said.

Also addressed in the letter was the hardware and packaging research work that is being done by DOE. While this is supposed to be generic and nonsite-specific research, Halstead said some of it might relate to Yucca Mountain if the project were restarted.

The DOE stated in December 2015 that they had about $19.5 million carry-over funding from previous appropriations.

Halstead said that the remaining carry-over appropriations would limit what the DOE could do without new funding from Congress.

“In the absence of sufficient appropriations DOE wouldn’t be able to move the license application forward even if they felt that they were required to do so,” Halstead said.

“In our opinion, DOE would need $100-150 million and at least 12 months just to start gearing up for the full legally-mandated licensing process,” Halstead said.

The DOE estimated in 2007 that it would need $1.66 billion and 10 years to complete all activities associated with licensing, in addition to more than $600 million spent on licensing from 1998 to 2007.

The Yucca Mountain project was presumed dead after in 2010, the Obama administration scrapped plans to store tons of nuclear waste in it. The U.S. Court of Appeals for the District of Columbia Circuit ordered the Nuclear Regulatory Committee to resume the proceeding in August 2013.

In November 2013, NRC responded to the court order by directing its staff to resume the preliminary portion of the proceeding by using available limited funds. NRC staff subsequently requested that the DOE prepare a supplement to their 2008 Environmental Impact Statement, but the DOE declined, and the NRC did not order the DOE to prepare the supplement.