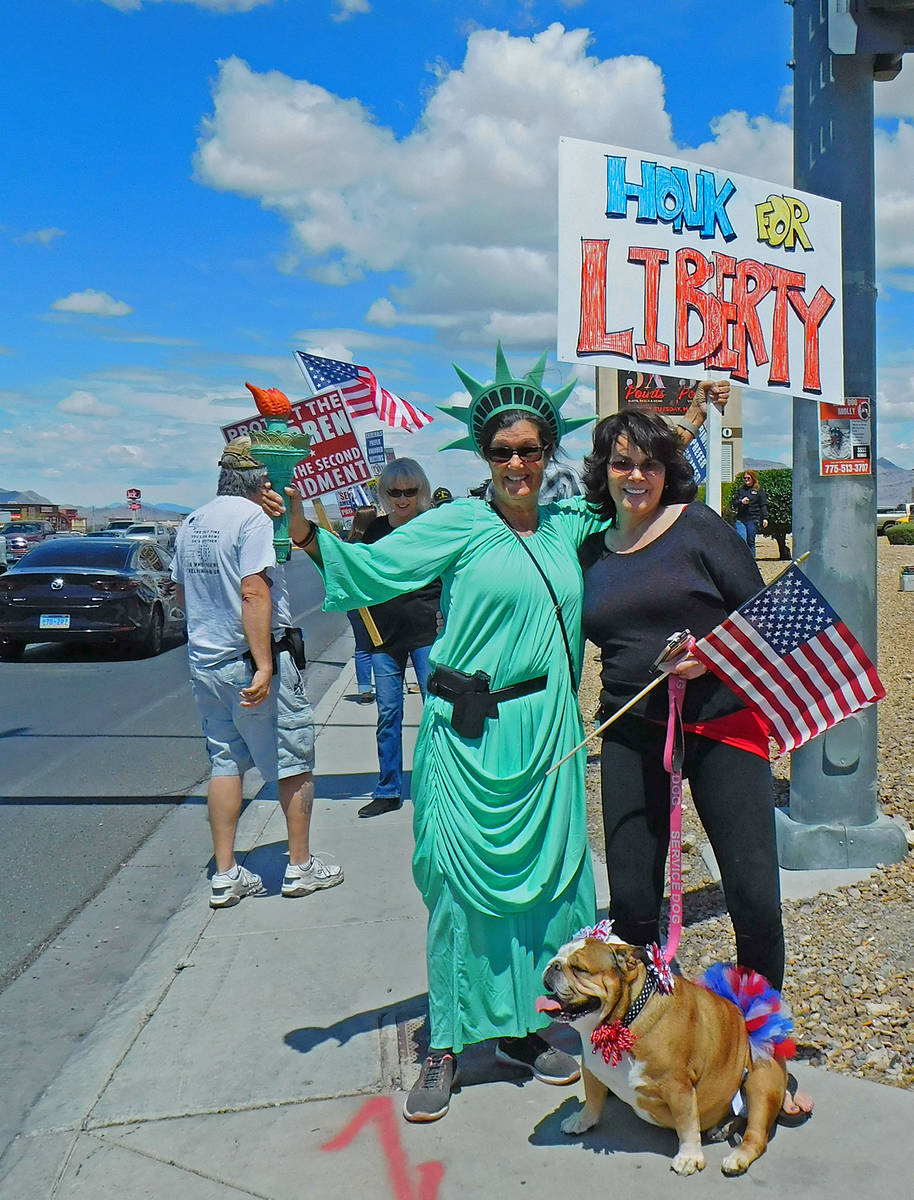 Robin Hebrock/Pahrump Valley Times Lady Liberty, aka Pamela Morgan, and Dee Mounts, along with her dog Pebbles, pose for a photo at the Stand in Solidarity rally hosted May 22. 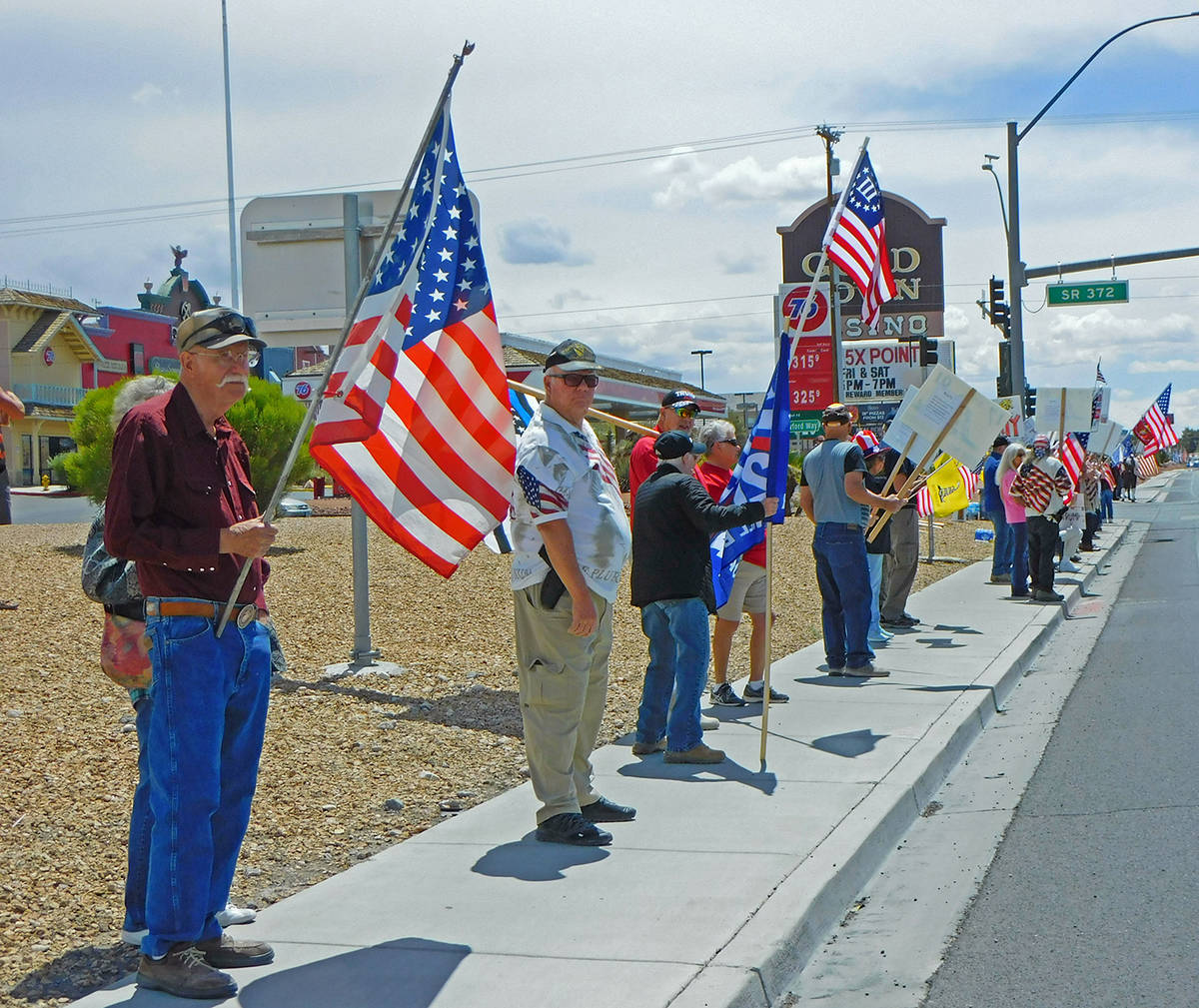 Robin Hebrock/Pahrump Valley Times With flags and signs in hand, residents of the Pahrump Valley and surrounding areas lined Highway 160 on May 22 to show support for the Bill of Rights and the Second Amendment. 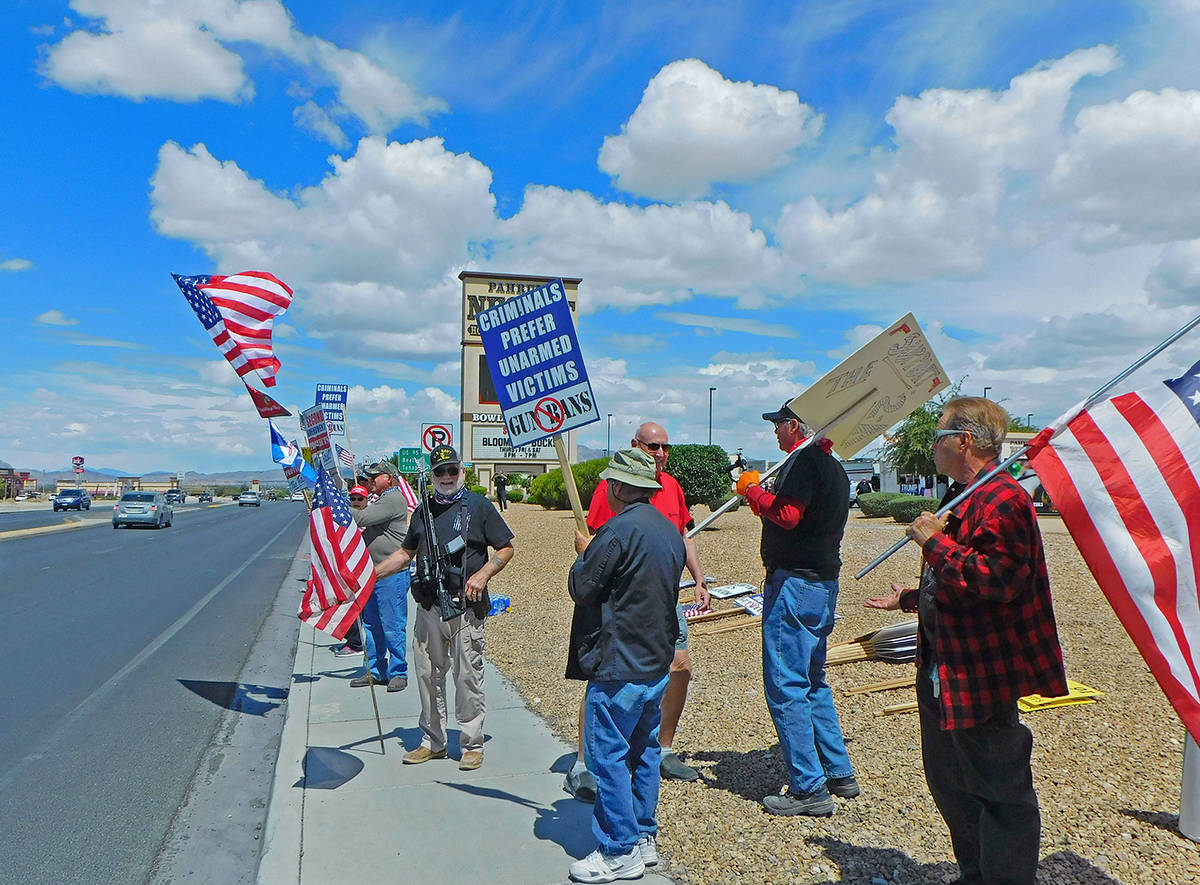 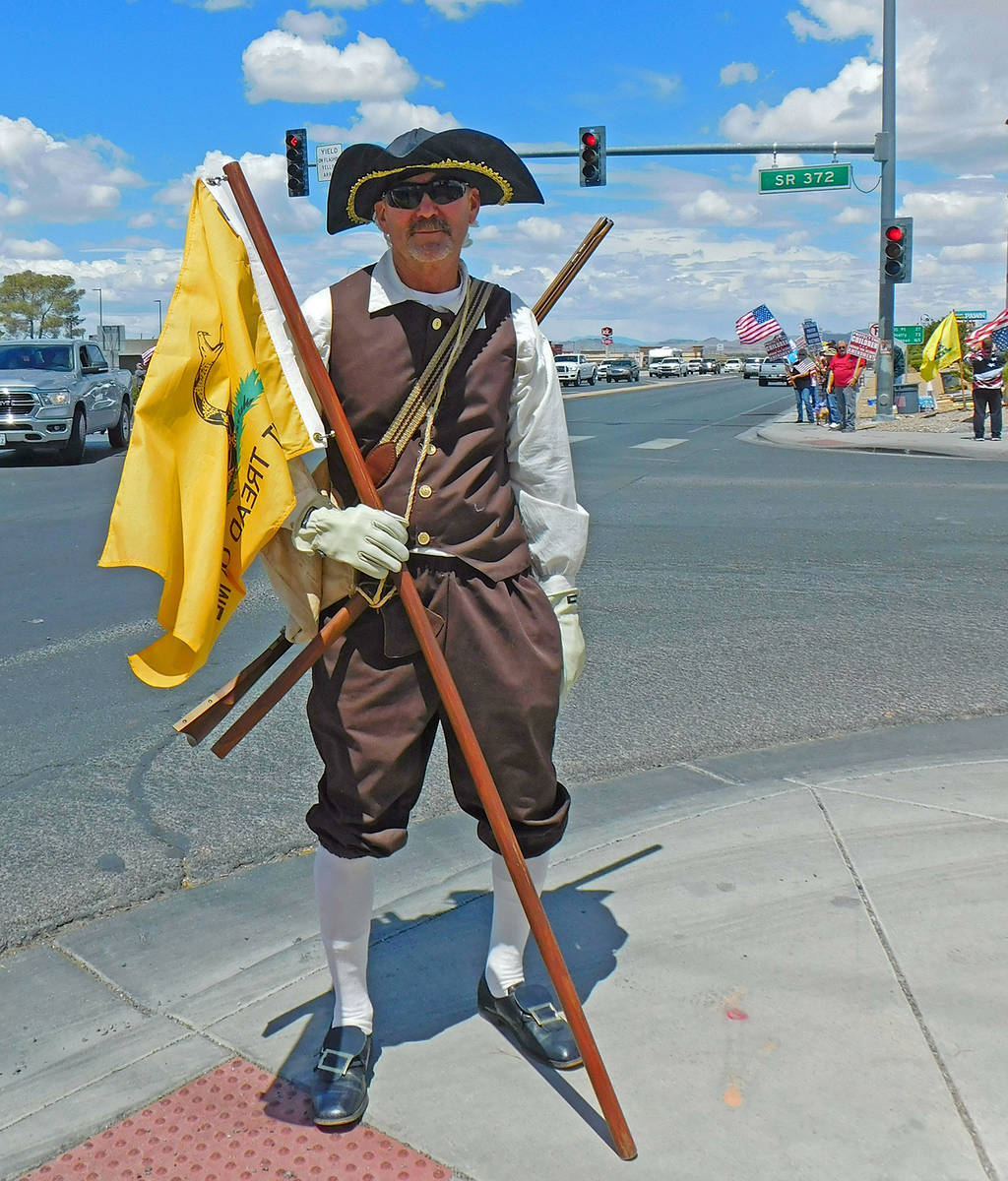 Robin Hebrock/Pahrump Valley Times Richard Bushart, one of the organizers of the Stand in Solidarity rally, was dressed as a 1776 Minute Man. 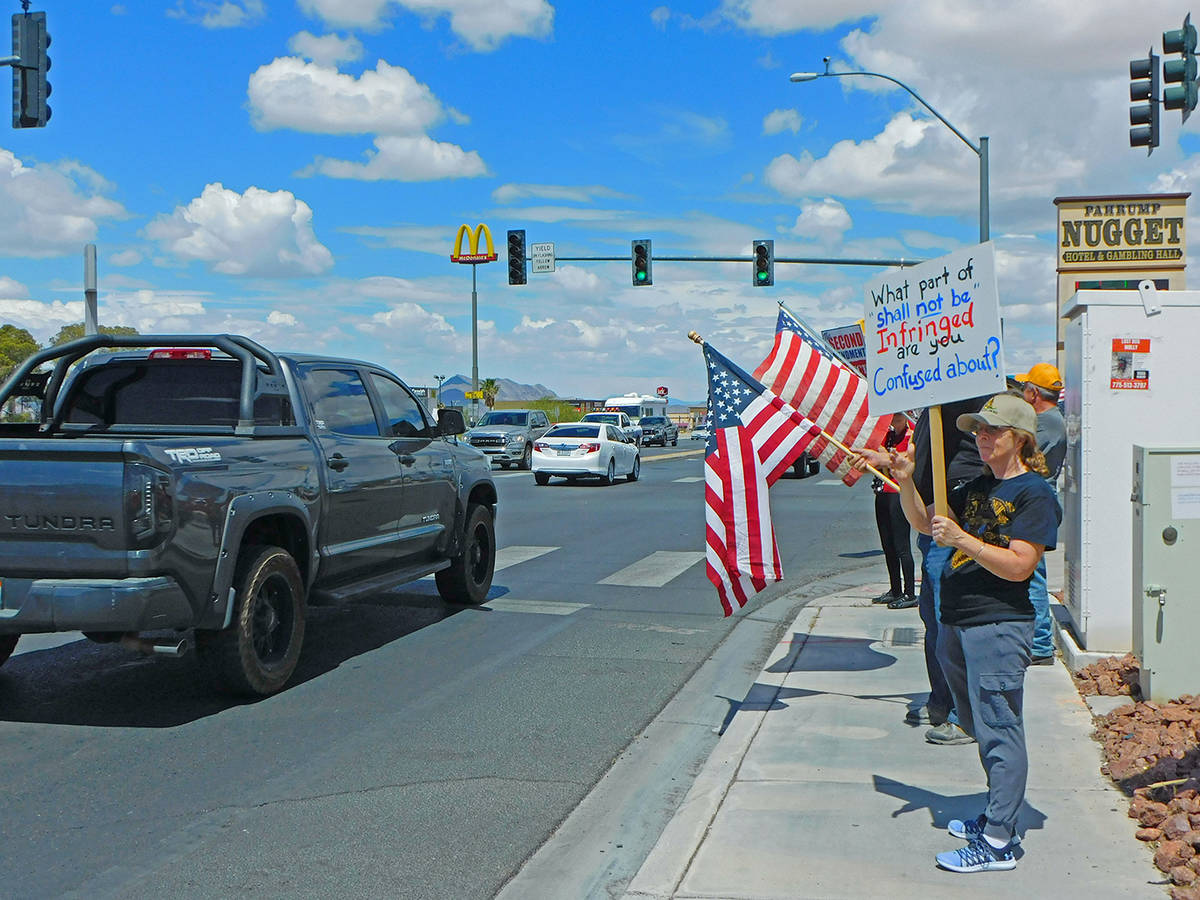 Robin Hebrock/Pahrump Valley Times Cars driving by the intersection of Highways 160 and 372 made quite a ruckus as they honked their horns in support of those attending the Stand in Solidarity rally on May 22. 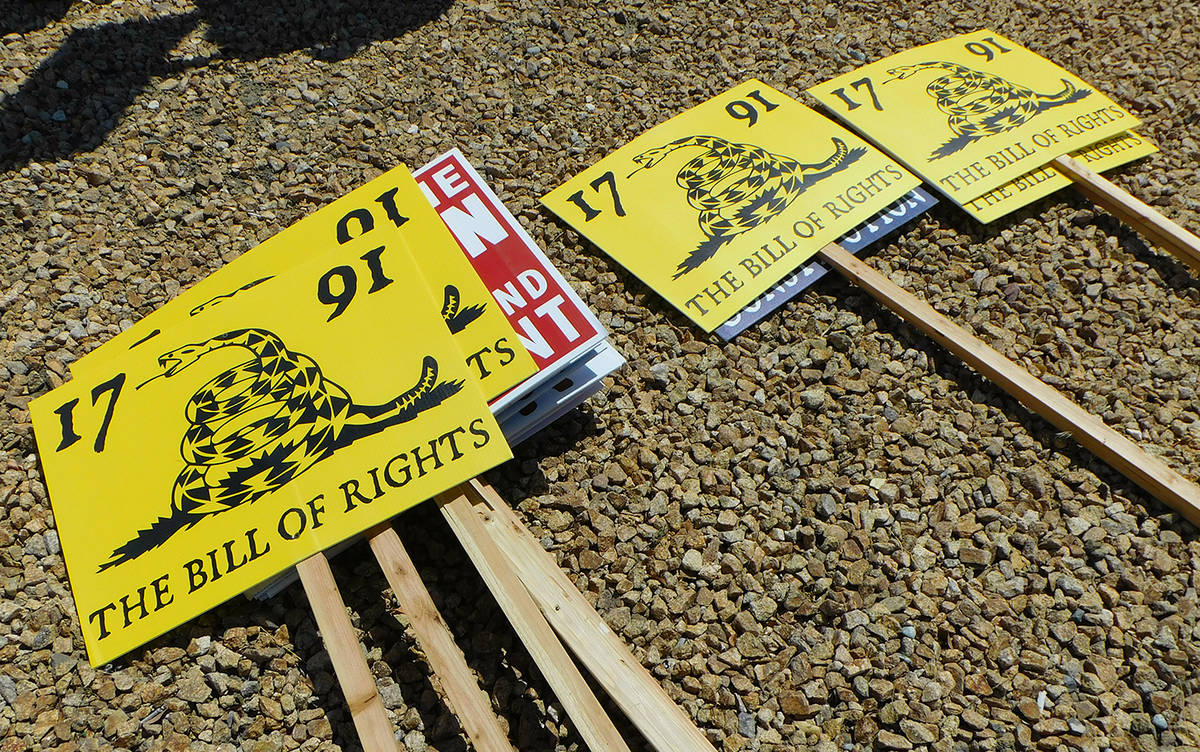 Robin Hebrock/Pahrump Valley Times Plenty of signs were on hand for those who attended the Stand in Solidarity rally.

It was a day that both Bruce Schoenberger and Richard Bushart had been looking forward to with much optimistic anticipation and after all was said and done, the two were far from disappointed.

Even before the appointed hour of 11 a.m., under a dazzling blue sky dotted with puffy white clouds and amid nearly perfect weather, residents of the Pahrump Valley and surrounding areas gathered. They raised up signs and hoisted flags, peacefully assembling at the busiest intersection in town to take a “Stand in Solidarity” in celebration of Nye County and its status as a sanctuary for both the Second Amendment and the Bill of Rights.

With patriotic dress and patriotic words at every turn, the rally was a vivid, visual display of the local attitude, an amassing of those who hold the U.S. Constitution close to their hearts, a conclave of citizens who fear the loss of their freedoms and liberties and who will do whatever they can to push back against what they see as the overreach of government.

It all took place on Saturday, May 22, when dozens upon dozens of people flocked to the corner of Highway 160 and Highway 372 for the “Stand in Solidarity” rally organized by Schoenberger and Bushart.

“It was a beautiful morning and a cool afternoon with slight breezes,” Schoenberger described following the event. “Patriotism was in the air while citizens of our country came out to celebrate the fundamental rights of our Constitution and the Bill of Rights. Richard and I, as promoters of the event, were satisfied with the turnout. The citizens were passing by us, honking passionately with thumbs up, and frankly, the sound at times was deafening!

“Our best total estimate would be conservatively 200-plus attending throughout the two to three hours we were out there, with people coming and going, most staying about 45 minutes to an hour,” he continued. “Most importantly, the compassion and result of the people that participated, and the most satisfying reaction from the public driving by showing support and solidarity, was truly humbling.”

Schoenberger spent a good portion of the rally documenting the happenings, snapping photos and speaking with attendees, conducting interviews to capture the heartfelt viewpoints of those who had taken the time to head out and show their support on Saturday.

One such attendee was Nye County Commissioner Frank Carbone, whom Schoenberger asked about the actions that had been taken by the board in regards to the county’s Second Amendment and Bill of Rights sanctuary status. Carbone said those actions had been taken because, “It’s the sentiment of Nye County, because Nye County believes in the Bill of Rights, we believe in the Constitution. I mean, just look at the way we do things, look at what’s going on here.” Carbone motioned around to the crowd that had gathered. “I thank these folks who are out here, because they are part of the group that helps put these things together,” Carbone added. “They are, in effect, our representative republic speaking to us as commissioners.”

Bill Carns, the current chair of the Nye County Republican Central Committee, spoke with Schoenberger as well, remarking, “Our rights are bestowed upon us by our creator and are untouchable by man or government.” Carns emphasized his belief that the country’s forefathers provided for these inalienable rights in writing not to gift them to the people, but as a deterrent from future attempts by the government to infringe upon those God-given rights.

Dressed as Lady Liberty and wearing a firearm strapped to her side, Pamela Morgan said that she was also a believer in the Bill of Rights, telling Schoenberger she was open carrying because, “It’s our God-given right and I carry a gun so I can protect myself should the occasion arise.”

Bushart was interviewed by Schoenberger too, telling his fellow event organizer that he feels, as everyone around him so evidently did, that the Constitution and Bill of Rights, particularly the Second Amendment, must be vigorously defended. Dressed as a 1776 Minute Man, complete with an authentic reproduction of the very rifle used in defending and securing the defeat of the British, Schoenberger said Bushart was a reminder of what the men of the Revolutionary War fought for and a warning against allowing any such encroachments upon the people’s rights today.

One other interview Schoenberger touched on was with a woman who did not wish to provide her name, but who told him she had become a U.S. citizen just last year. Schoenberger said he was overwhelmed with emotion when she stated, clearly and proudly, that she was there that afternoon to, “…stand up for our rights! We have to stand up for the Constitution and make sure it does not get changed!”

All in all, Schoenberger and Bushart said they were very pleased with the Stand in Solidarity event and are looking forward to several other such types of events in the coming months.