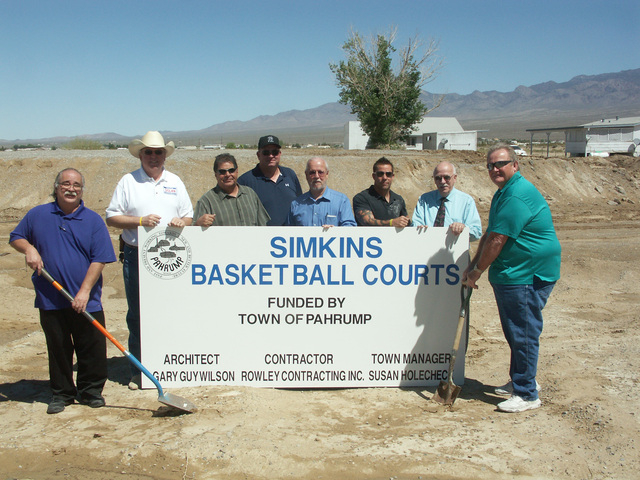 The quiet neighborhood in the area of Simkins Park is abuzz this week with bulldozers and work crews as the construction of basketball courts got underway at the site.

Pahrump Town Board members voted this year to approve the engineering bid award for the project on the far north end of the valley.

Rowley Contracting out of Las Vegas was awarded the bid.

On Tuesday, Pahrump Building and Grounds Manager Matt Luis said the project took several months just to get off the ground.

“The planning phase on the courts has been going on for at least six to eight months. We were trying to get all of the parts and pieces in play to see exactly what we wanted to come up with as a finished product,” he said.

Architect Les W. Travis from Gary Guy Wilson Architects firm spoke about the design and amenities of the facility, which he said, should be completed by late spring.

“It will take approximately 60 days. It’s essentially two full-sized basketball courts and it’s edged with concrete and fencing so that they won’t lose too many basketballs. We are also including brand new drinking fountains so players will have water available. There will also be some seating areas just adjacent to the courts,” he said.

The 8.7 acre park has undergone some major renovations over the years.

Those improvements include a 125-space asphalt parking lot and shade covering over the playground area.

New landscaping and over 600 feet of sidewalk, along with existing restrooms round out the facility, which has become a popular spot for birthdays and family parties.

Luis, meanwhile, said residents in the area need not worry about being disturbed by users of the court after dark.

“It’s neighborhood friendly so there will be no lighting on this project. The players can use it from sun-up to sundown. We try to take in consideration the neighborhood and that’s why we have it built back in the farthest corner of the park,” he said.

Luis also noted that he has noticed a lot of interest from those living near the park about when the courts will be ready for use.

“People are already excited hearing the rumor that the basketball courts are coming up. This is going to be great for them to see that it is actually happening,” Luis said.

This week’s groundbreaking for the courts would not have been possible without the work of the Pahrump Parks and Recreation Advisory Board, Luis said.

The board performed most of the initial planning and organization, before presenting their findings to the Pahrump Town Board for final approval.

Advisory board member Rodney Camacho said this week he was pleased to see the board’s plan actually come to fruition.

Camacho and his family have been long time residents in the area.

“There have been some upgrades to this park already but there was still one thing missing and that was the basketball courts,” Camacho said. “There were no courts available unless you went to the middle school, but the gates are locked on the weekends. We as a board talked about it, and approved it. We now have two full-sized basketball courts coming up. We are looking at maybe mid-June for the special grand opening. A lot of kids play basketball, including mine. It was a long time coming and we as a board are really excited about it,” Camacho said.

Parks and Recreation Advisory Board Chair Dave Clasen this week spoke about a similar project the town is presently undertaking on the opposite end of town.

“Kellogg Park is on the horizon and we just had a special meeting with the board. They had made an engineering plan of bathrooms and basketball and tennis courts. There’s also a walking park. We went in as a board and tweaked it a bit. That phase is ready to go. There will be open areas for the kids to play. We are not looking to make a sports complex. It’s more like a ‘serenity park’ for the older people to come and relax,” he said.

Luis said a request for proposal was recently approved by town officials to resurface the courts at Petrack Park.

Last month, board members approved the renovation of the facility in an amount not to exceed $25,000.

“The RFP has already gone out and the deadline is coming up so we’ll see where we are at that point,” the buildings and grounds manager said.