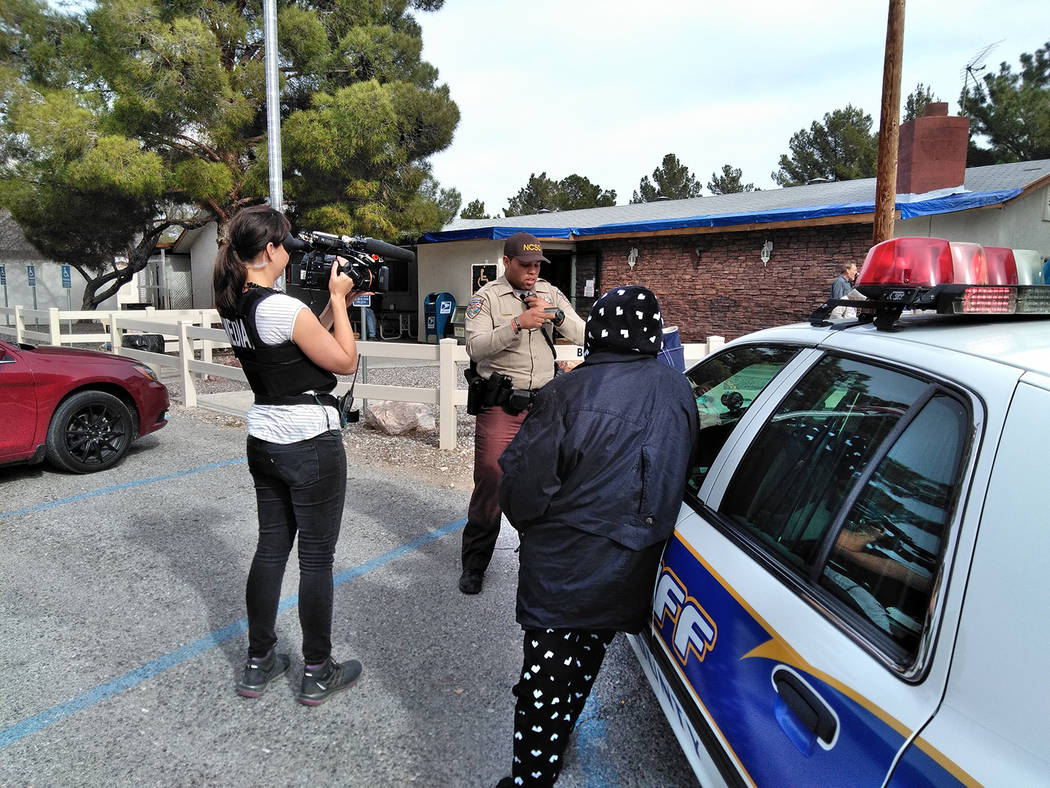 Selwyn Harris/Pahrump Valley Times A 'Live PD' crew member films a Nye County Sheriff's deputy during a service call last week. The popular program on the A&E Channel is spotlighting law enforcement in Pahrump, and airs live on Friday and Saturday nights. At present, upward of eight law enforcement agencies around the country have agreed to participate in the production of Live PD. 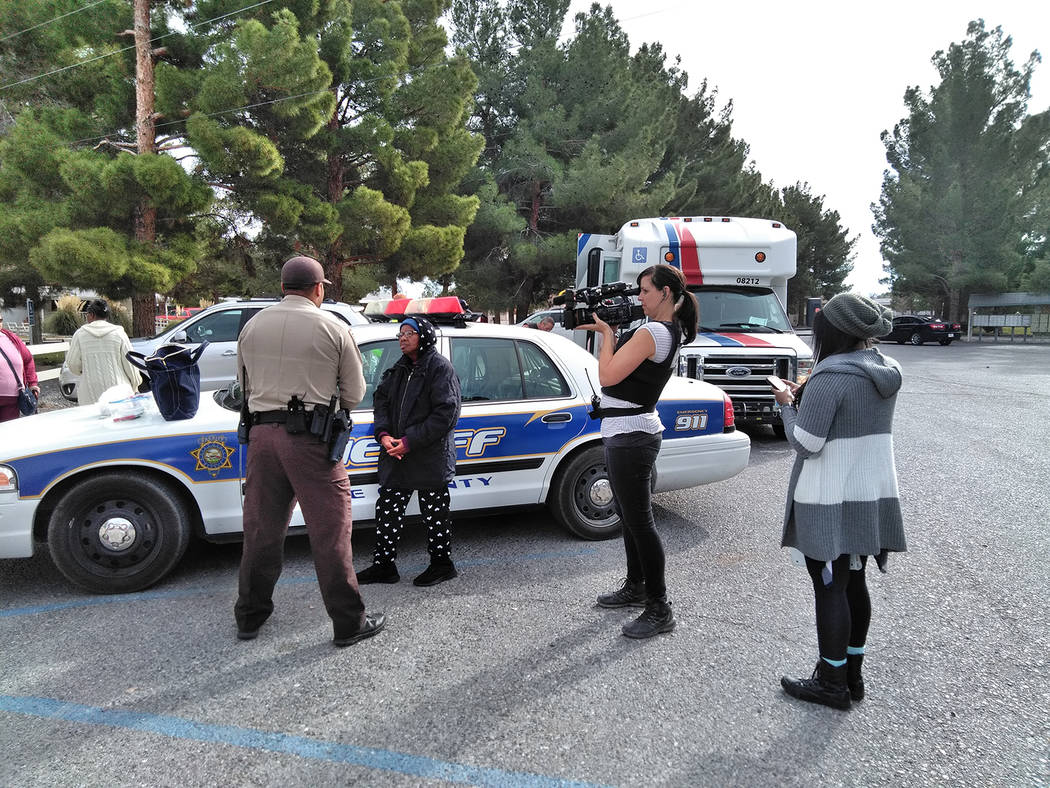 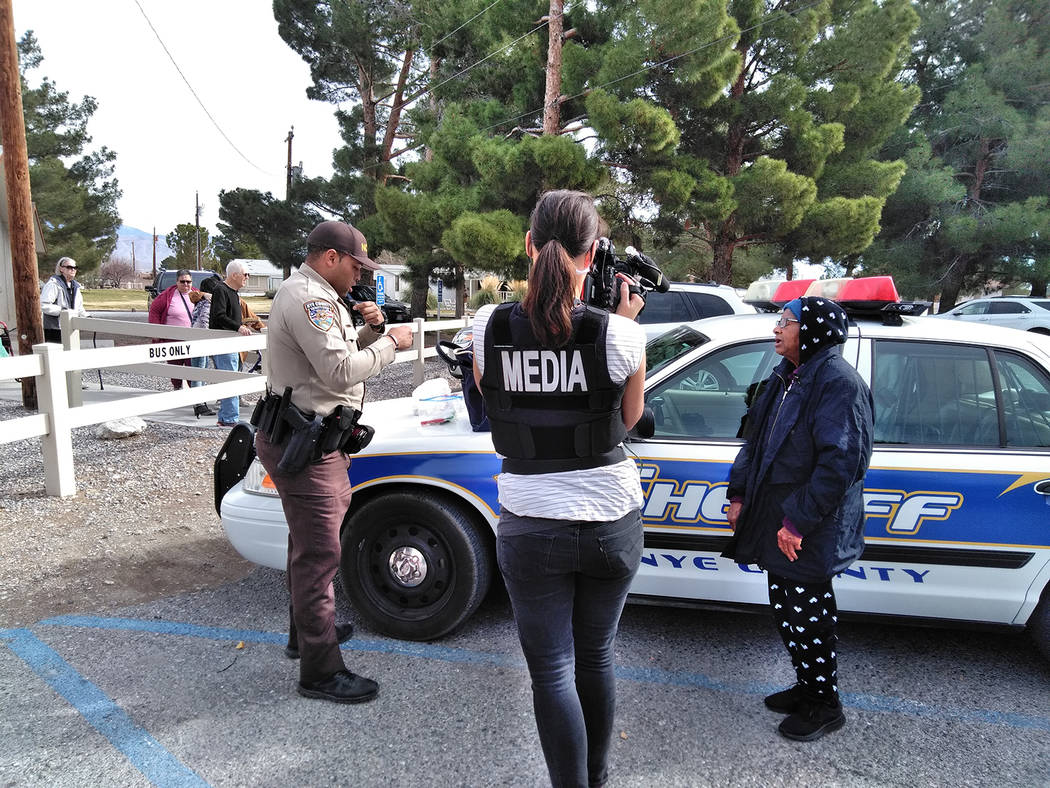 Selwyn Harris/Pahrump Valley Times At present, upward of eight law enforcement agencies around the country, including the Nye County Sheriff's Office have agreed to participate in the local television production of Live PD.

The Nye County Sheriff’s Office has a message for area drivers who may get pulled over for a traffic infraction in the future.

This month, producers and film crews from “Live PD” are riding along with Nye County deputies as they patrol the highways and byways within the town of Pahrump.

The television show is a live documentary series, showcasing various law enforcement agencies across the country in real time, as they patrol their respective communities each Friday and Saturday night on the A&E Channel.

The program is the creation of Dan Cesareo, president of Big Fish Entertainment, which produces the show.

At present, upward of eight law enforcement agencies around the country have agreed to participate in the production of Live PD.

Cesareo talked about how the agencies are chosen for the program.

“It’s really about featuring a cross-section of America where we try to focus on what does law enforcement in America look like today, and what does it look like to be on a ride-along with departments across the country,” he noted. “We have been very thoughtful and purposeful in approaching departments that really give us a different look, whether it’s geographical, department size, or whether it’s a police department versus a sheriff’s office, versus state police.”

Additionally, Cesareo said producers approached the Nye County Sheriff’s office top brass with the hopes of catching local deputies in action while out patrolling the town.

“We began talking to Nye County late last year and we felt like they would be a good fit,” he said. “The Nye County Sheriff’s Office has been fantastic to work with. We were really looking for a cross-section of police departments and overall law enforcement in America. We are not trying to tell the story of big cities or follow only departments in urban areas for the show. The Nye County Sheriff’s Office was very open to it. It’s not an easy commitment. Because we are filming multiple days each week and we are live on the weekends.”

“I think it’s a great show,” he said. “I didn’t really see it until they approached the sheriff and me. It genuinely shows law enforcement going about their daily and nightly duties live on television. It truly depicts what we are dealing with each and every day.”

“I also think it’s a great show,” Wehrly noted. “I really didn’t understand the concept at first, but they have six different agencies going on at the same time. They just switch from department to department clear across the United States. The producers of Live PD approached us and inquired whether we would be interested in participating in the show.”

Regarding how the program was initially conceived, Cesareo said it all began when he and producers came across a news item one day.

“That article that was referencing how some police agencies were live tweeting from patrol because they wanted to provide a little more transparency to keep their constituents and community informed,” he said. “Having been on police ride-alongs myself, I thought we could give everyone in America the chance to go on a ride-along with the police live. It is a very, very different experience when you arrive on-scene and get to see the whole story from the beginning to the end.”

Cesareo also spoke about how the show has evolved over the past 14 months.

“The show started as just an eight-episode order back in October of 2016,” he said. “It began with two hours on Friday night and in January of 2017, it went to three hours on Friday nights and in February, it went to three hours on both Friday and Saturday nights. As far as coming up with the idea, we had previously done some stuff in the law enforcement realm. Our development team are constantly looking for fresh and new ways to tell stories.”

Since the show was launched last October, Live PD has filmed more than 25 different police agencies, where they typically feature six agencies on Friday and Saturday nights.

The popularity of the program is evidenced by the fact that it was nominated for a Critic’s Choice Award for Best Unstructured Reality Series.

“That was incredibly exciting and obviously it’s great to be recognized, especially among the critics when one considers that it’s a new show,” Cesareo said. “A lot of the other shows in the same category have been on the air for a much longer period of time.

“It is very exciting to see how well the show has performed because we have only been on the air for a year.”

Late last year, Cesareo said the A&E Channel put in an order for an additional 100 episodes of Live PD.

“That is a massive commitment and a big vote of confidence in the program and the show,” he noted. “I think we have really tapped into something unique and special where we are capturing a story and experiencing in a way that’s never been captured before on television. The viewership has been just amazing and our Live PD Nation has really embraced the show. That is pretty incredible, and we are up about 150 percent from when the series first launched in October 2016.”

“I think the one thing that I never expected was the social response to the show and how affected and engaged the viewership is,” he said. “We have been in Nye County for just a few weeks and we typically work with a department for a couple of months. The experience has been great and the sheriff’s office has been fantastic to work with. It really feels like the community has embraced us being there. We film during the week and we film on the weekends live.”