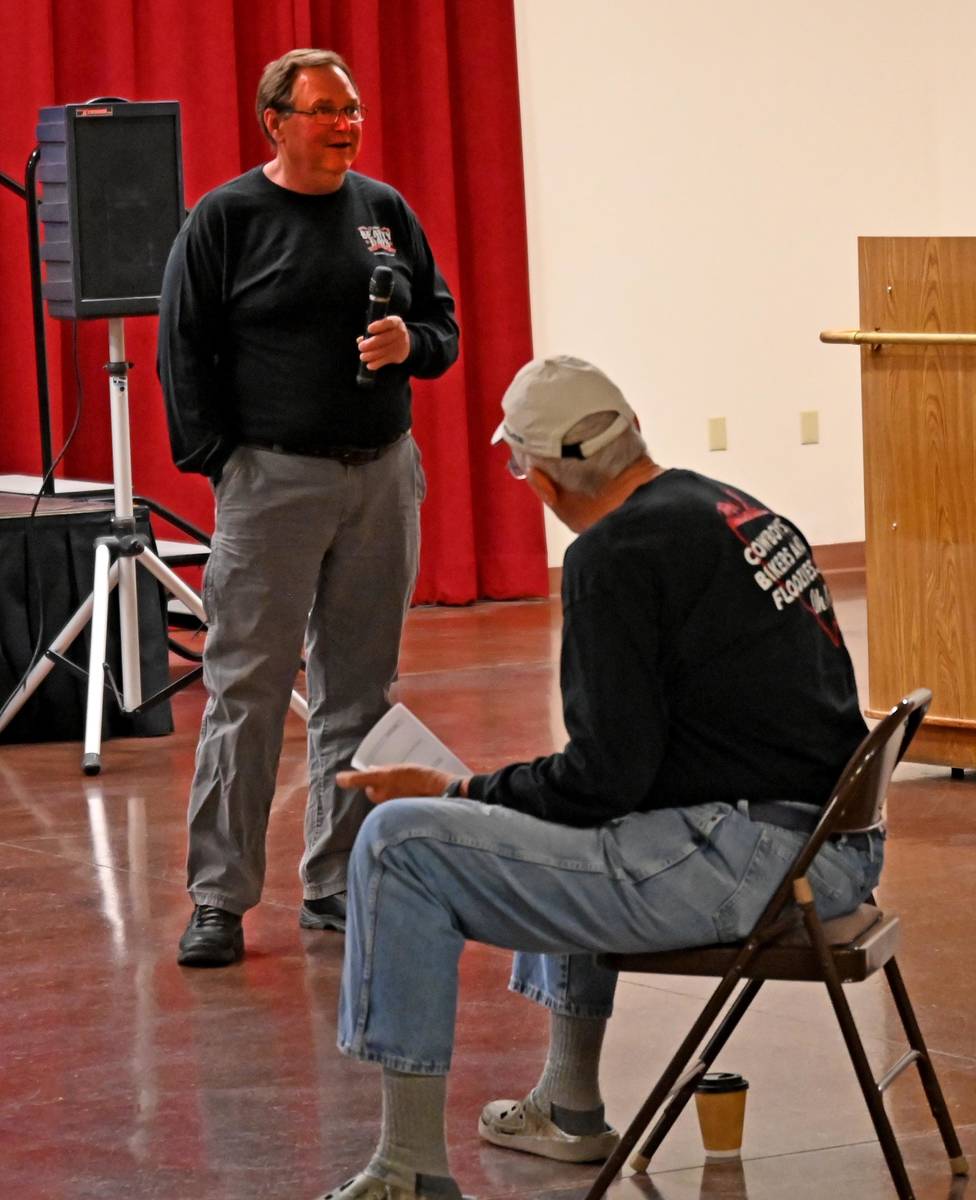 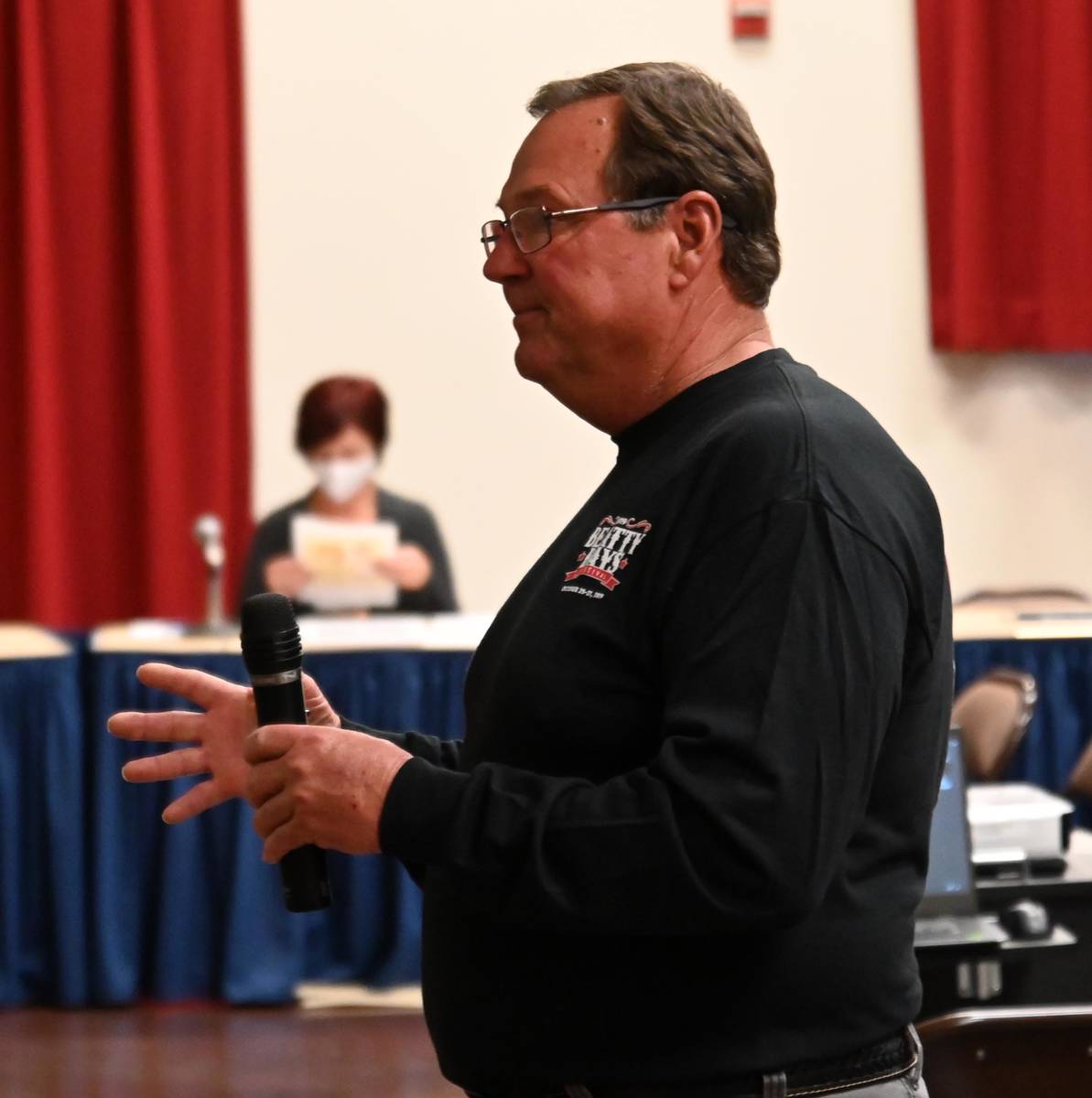 Richard Stephens/Special to the Pahrump Valley Times Michael Young, project manager for the North Bullfrog Project for Corvus Gold, gives a presentation to the Beatty Town Advisory Board on April 26. 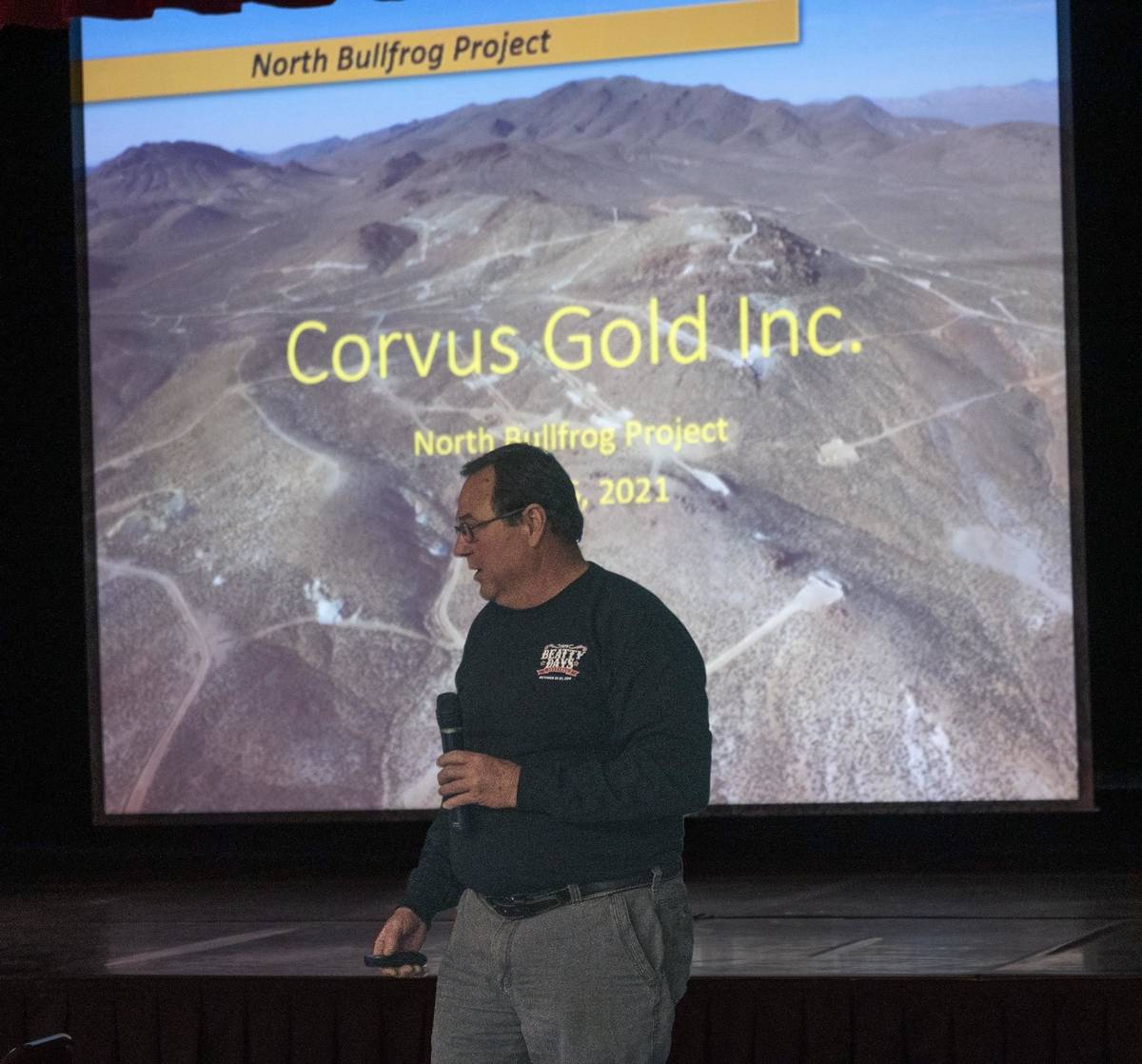 Richard Stephens/Special to the Pahrump Valley Times Michael Young, project manager for the North Bullfrog Project for Corvus Gold, gives a presentation to the Beatty Town Advisory Board on April 26.

Citing a “robust economic potential at a gold price of $1,500 an ounce,” Michael Young, project manager, gave the Beatty Town Advisory Board a presentation April 26 on Corvus Gold’s plans for its North Bullfrog project.

The North Bullfrog is north of Beatty, west of Highway 95, and includes several historic mine sites, including the Mayflower and the Yellowjacket.

Corvus, which has already invested millions of dollars in exploration on the project over the years, will be spending approximately $6 million on the permitting process alone.

The mine is expected to employ approximately 250 people during construction, and about 230 during operation, and is anticipated to be in production for 13 years. It is expected to produce about 1.47 million ounces of gold.

Since Corvus is primarily a gold exploration company, Young says he doesn’t know if Corvus will operate the mine itself or not.

“We strongly believe it’s going to be a mine,” he said. “We don’t know if Corvus’ name will be on the front door.”

It is planned to be a totally open-pit operation, with five pits, three of which would eventually join, and two of which could be pit lakes.

Asked about the pit lakes, Young explained that what can be done with them, such as back-filling or making them available for recreation, depends on a number of factors, including the quality of the water in them.

A major concern for Beatty residents, as shown in questions from the audience at the meeting, is how the mine’s use of water might impact the town’s water supply.

He said that Corvus had participated in conversations with the Beatty Water and Sanitation District and was aware of the importance of the Little Indian Spring to the town. It is the nearest source to the North Bullfrog of any used by Beatty.

Advisory board treasurer Erika Gerling stated the importance of historic mine sites and trails to the town’s outdoor recreation economy and also suggested that the company spend more than the projected half million dollars on projects for the community. She also was hopeful that the mine would employ local people where possible.

Young responded that the company was aware of the town’s concerns. As for investing in the community, he said, “Our big thing is to identify projects we can help with depending on community needs.”

Young could not make any projections about the Mother Lode project. The company has identified significant gold deposits in that area, and is bordered on both sides by exploration being carried out by other companies.