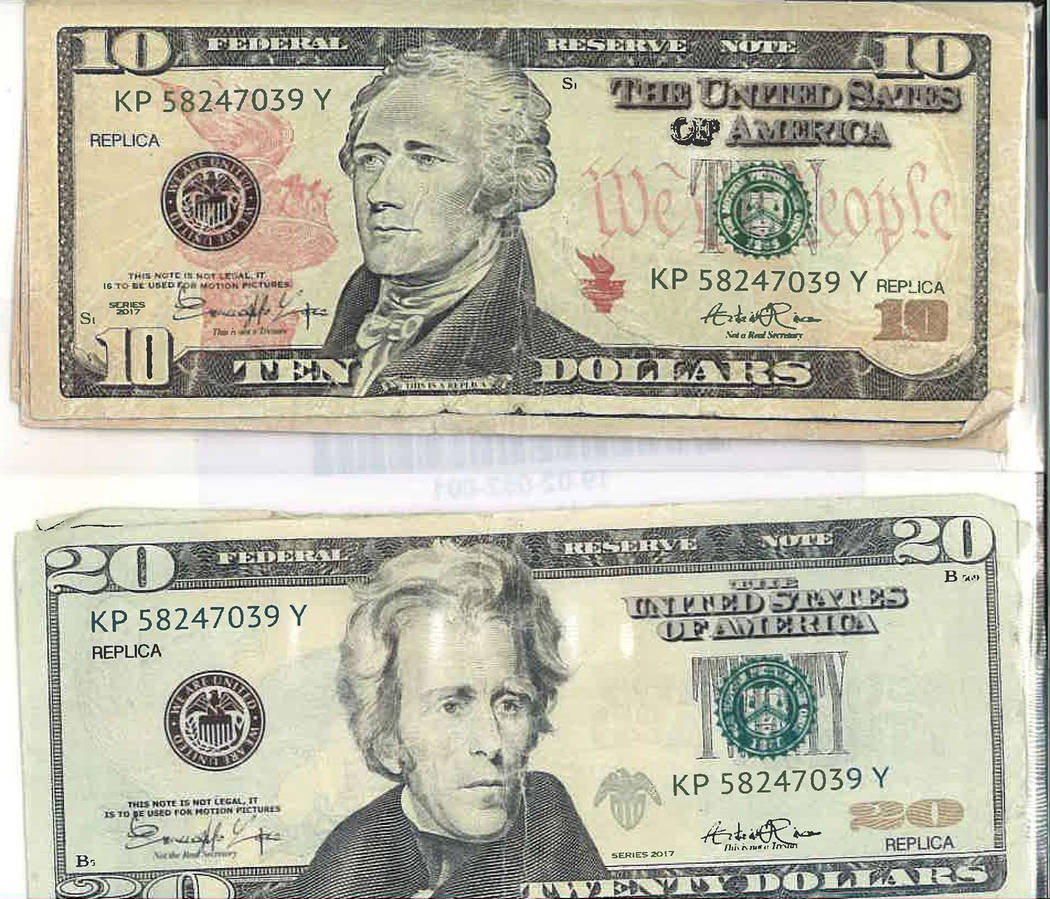 Special to the Pahrump Valley Times $10's and $20 dollar bills were passed off to two Lone Pine, California businesses in Inyo County last month. At closer inspection at the upper left, and lower right hand corners, the word "replica," can be plainly seen, as well as the words "This Note is not Legal, it is to be Used for Motion Pictures," in the lower left had corner. Both bills also share the same serial numbers. The Inyo County Sheriff's Office is investigating the incident.

The Inyo County Sheriff’s Office is warning area businesses and customers to beware of counterfeit currency.

Sheriff’s Office Public Information Officer Carma Roper said the denomination of the bills, which are posted on the agency’s Facebook page were $10’s and $20’s.

She did not disclose the names of the businesses.

“We don’t have any solid leads as of yet,” Roper said. “Sometimes when you put information like this on social media, more people are prompted to look back at some of their transactions, so we may have more reports coming to us, based on the information that’s out there right now. The counterfeit bills were discovered in February. Right now, it’s hard to determine exactly how many bills have been passed off.”

Roper also noted that the word “replica” is imprinted on the bills’ upper left corner, as well as a fine-print message, stating, “ This Note is not Legal, it is to be Used for Motion Pictures.”

“I hear that people can purchase these fake motion picture currencies online,” she said. “I think they look pretty authentic, so we really hope our local businesses are paying extra attention to the cash that they are handed. Because if you don’t look at the bills closely and carefully, you won’t see that it is a replica and used for motion pictures. How would you know if you didn’t do that?”

During a high-dollar transaction, using $50 and $100 bills, store cashiers normally inspect the currency for its watermark, or mark it with a special pen to determine its authenticity, while typical modest transactions with smaller denominations don’t receive as much scrutiny.

“In a quick transaction at a business, it would be easy to see how this could occur,” she said.

Additionally, Roper cautioned that an innocent customer may be at present, walking around with the fake currency, and not even know.

“We get a lot of travelers in and out of our area, so a customer could make a transaction and possibly receive one or more of those counterfeit bills in change and have it with them,” she said. “They will then go somewhere else and spend it and they could possibly be targeted for passing off counterfeit bills. All businesses should have their employees who are cashiers, take a few extra seconds to closely inspect the bills to determine if they are authentic during a transaction. The more we actually bring this to the forefront of the public, they will have that information in front of them.”

Founded in 1865, the U.S. Secret Service at the time, was tasked with suppressing counterfeit currency.

In terms of unknowingly passing a counterfeit bill, Brian Spellacy knows a thing or two about the act.

Spellacy just happens to be the special agent in charge of the Secret Service in the state of Nevada.

“If you look at the totality of the circumstances, and if there was no intent to pass counterfeit currency, we would not proceed with anything regarding illegal actions against you,” he said. “It would be one thing if you had one counterfeit bill or maybe two, but most people that you see passing counterfeit currency have a lot more than that. You can pretty much recognize their intent from their actions during the transaction.

As a business owner who turns in a counterfeit bill to authorities, Spellacy said the owner cannot immediately recoup their losses.

“At that point, they should get a receipt from the police agency, or sometimes we’ll have businesses come to our offices and bring us what they suspect is counterfeit currency and we will give them a receipt for the amount,” he said. “Come tax time, they can actually file that as a loss in terms of business.”

Additionally, Spellacy noted the same applies to an individual who unwittingly gets stuck with phony cash.

“They either bring it to the police department, or to us, explaining that they got it from the store,” Spellacy advised. “The police at that point, would give them a receipt. They wouldn’t get their money back at that time, but in terms of when you do your taxes you can file that as a loss.”

Roper, meanwhile, said if anyone in the area suspects they are in possession of counterfeit currency, they should contact authorities immediately.

“Especially if they have an idea of where they had received the fake currency,” she said. “Any of that information is helpful. Certainly, people can call us at 760-878-0383, option 4. Any information that we receive which can be connected to the fake currency is very helpful for our investigators.”