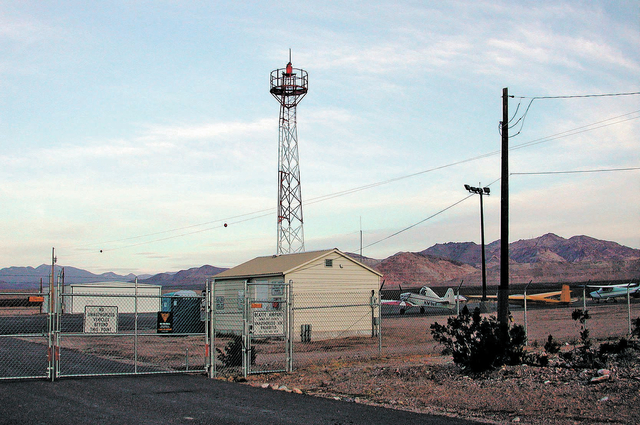 The 2014 grant application for $2.015 million in FAA funding for the Beatty and Gabbs airports will require a $134,375 match from Nye County. Another $187,500 grant application would fund a Tonopah airport improvement project and require the county to ante up $12,500.

The FAA funds 93.75 percent of the project costs, the county is responsible for 6.25 percent. A contract was approved with Atkins North America Inc. for the design, bidding and construction management of the projects.

The application includes $1.75 million for grading the 6,212-foot long, runway safety area at the Beatty Airport, grading the runway object free area and constructing a 7,200-foot long drainage berm. Consultants said the runway and object free area don’t meet federal standards and to properly grade the safety areas will result in about 120,000 cubic yards of excess soil, which will be used to construct the drainage berm that will prevent storm water from entering the operational area of the airport, which also includes a tie-down apron and a future parallel taxiway.

The application includes $200,000 in design work by Atkins North America for reconstructing a runway at the Tonopah Airport, including a geo-technical report, surveying, preparing plans, contract documents, technical specifications and a detailed cost estimate. The reconstruction work will include pulverizing the existing asphalt concrete pavement and re-using it as the aggregate base course and paving with asphalt concrete.

Consultants said the 7,160-foot-long airstrip is the primary runway at Tonopah Airport, which received a slurry seal in 2004 but is in poor condition. Paving joints are 13 feet apart and are separating along the length of the runway, with transverse cracks every 40 to 50 feet that are extremely wide. The actual reconstruction is expected to begin in 2015.

The package includes a $262,500 grant pre-application to design grading work on the runways, runway safety areas and object free areas for the Gabbs Airport. It includes construction, design, bidding and construction management by the engineer. The Gabbs Airport has dirt runways, the county application states they become unstable due to weather and weeds have been growing on them.

Nye County Public Works Director Dave Fanning said the Tonopah Airport gets use by United Parcel Service, an air ambulance and military aircraft at times, depending what drills they’re conducting with the Tonopah Test Range. The Beatty Airport is the only other paved county airport. Fanning said it was used more heavily when the Barrick Bullfrog Mine was in existence, which closed in 1999, it now has five aircraft stationed there. The Gabbs airstrip is unpaved that requires weed removal. Fanning said he’s never seen planes land there since he took over county airports, but it’s an alternate landing strip for Fallon Naval Air Station.

In the long-range airport improvement approved for submittal to the FAA by commissioners last week, the county asked to remove old beacon lights at the Beatty and Gabbs airports, for which replacement parts are no longer available. Consultants said the lack of runway lights can make landing at Gabbs Airport hazardous at night.

The long-range plan approved for the Beatty Airport calls for constructing a turn-around area for a runway in 2016 that consultants say will allow aircraft to perform run-up operations before takeoff and allow aircrafts landing there a safe location to exit the runway and turn around before taxiing up the runway to access the tie-down apron. In 2018, the county wants to rehabilitate the northern half of the tie-down apron and construct an Automated Weather Observation System (AWOS) to provide pilots with weather information. A 12,000-gallon self-service fuel tank would also be installed.

Long-range plans for the Tonopah Airport call for rehabilitating a 8,630-foot-long taxiway in 2015 that consultants said is in extremely poor condition. Some crack sealant will be applied to a second taxiway.

Another 5,650-foot-long runway at the Tonopah Airport is targeted for reconstruction in 2017; consultants said it received a slurry seal in 2004 but is in extremely poor condition.