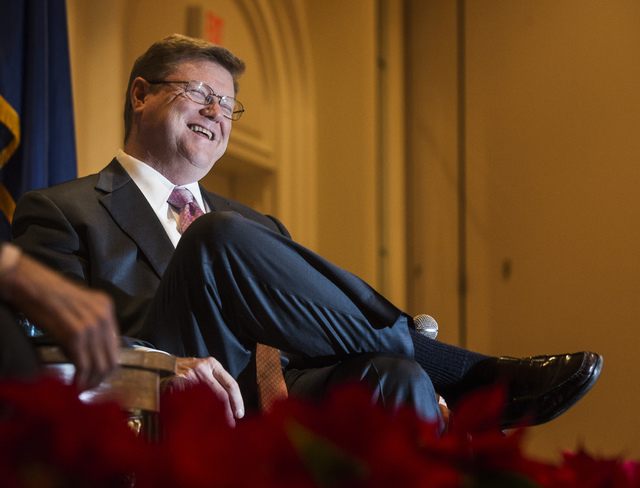 The resolution notes the BLM restricted grazing permits to two months at a time, even on mountain ranges where independent scientists and low-level BLM employees agree the grazing conditions are still good.

The two-month permits make it nearly impossible to plan a viable livestock operation, the county said.

“Ranchers across the state have noted deteriorating relationships between the BLM and the ranching community because of the BLM’s one-size-fits-all national drought monitoring index that threatens the value of grazing permits and the ranchers’ ability to stay in business,” the resolution states.

The county resolution states many ranchers have been asked to take a voluntary reduction of up to half their livestock herds amid threats their refusal will trigger a BLM closure of their allotment, regardless of the condition of the range.

“Where drought conditions exist ranchers reduce their numbers for their own well-being while the BLM uses the national drought map instead of considering range conditions in specific allotments to make draconian reductions,” the resolution states.

It faults the BLM for placing restrictions on ranching communities while failing to address “the explosive populations of feral horses that continue to decimate and destroy viable range land.” That paragraph drew an objection from County Commissioner Donna Cox, who said the BLM has been rounding up thousands of wild horses in Nevada.

County Commissioner Lorinda Wichman invited Cox to visit her Smoky Valley Ranch and she would show Cox all the wild horses on northern Nye County grazing lands. Counties were invited to submit the resolution at the request of the Nevada Association of Counties, the Nevada Cattleman’s Association and Nevada Farm Bureau also support it.

The resolution states, “the Equal Access to Justice Act has been and continues to be used by radical neo-environmental organizations to cause economic and environmental destruction.”

It adds, “certain federal government employees and agents frequently abuse their positions to the detriment of citizens and the economy and culture of Nye County.”

The resolution concludes, “be it resolved that ranchers, regardless of their sense of responsibility and stewardship and the condition of their ranges, who are threatened with diminished property values and inability to use their ranches to support their families have joined with others who have not yet experienced a forced reduction in their herd sizes but recognize the vulnerability of their position.”

Wichman said she received a phone call from Doug Fertado, manager of the Battle Mountain BLM District, which supervises northern Nye County, asking to pull the agenda item, which had been requested by Commissioner Butch Borasky. Fertado said only two livestock permitees had their grazing allotments reduced because of the drought, she said.

“He also said this type of action will lead to the listing of the sage grouse,” Wichman said. “It was also his opinion that cattle are overgrazing and it’s the overgrazing that is causing the cheat grass and not fires.”

Fertado also said wild horses had nothing to do with overgrazing because they don’t eat the same feed.

Some anti-federal speakers speaking out against the BLM resource management plan at the Monday meeting said it was a waste of time to even negotiate with the BLM.

• County commissioners also voted to send a letter to U.S. Sen. Harry Reid, D-Nev., expressing opposition to the Garden Valley Withdrawal Act. The bill requests the withdrawal of 805,100 acres of public land in far eastern Nye County near the Lincoln County line, where the City Art Project is being constructed.

The county states ordinance 380 requires a cooperative engagement with federal agencies that hasn’t occurred for this legislation. The letter, signed by Commissioner Wichman, states the legislation would limit multiple uses, permitted activities and operations in an area roughly the size of Rhode Island.

“The majority of land in the proposed legislation has the potential for resource development and beneficial utilization. The county supports efforts to both develop resources where appropriate while protecting or conserving resources where needed. The proposed legislation goes far beyond what is necessary for the protection of select resources and fails to account for the benefits of the development and utilization of other sustainable resources in this area,” the letter states.

Borasky wanted the letter sent to all members of Congress, not just the Nevada delegation, “along with that guy that sits in the White House.”