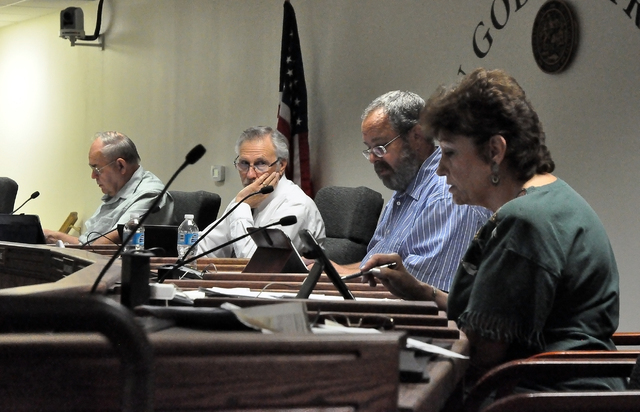 Horace Langford Jr / Pahrump Valley Times In a 3-2 vote, Nye County commissioners declined to fill the four vacancies on the Water District Governing Board at the June 21 meeting. The item will be back on the agenda on July 5, Nye County District Attorney Angela Bello said.

The Nye County Water District Governing Board is down to three members after Nye County commissioners voted against filling the four vacancies that will expire on July 1.

In a 3-2 vote, Nye County commissioners decided against appointing four members to the WDGB at the June 21 meeting.

A Monday meeting by the water board, which was formed by the Nevada Legislature in 2007, was canceled.

County District Attorney Angela Bello said the act creating the WDGB requires seven members, which are to be appointed by Nye County commissioners.

The item will be coming back before the board on July 5 to attempt to make such appointments, she said.

A few commissioners argued about the viability of the entity.

Commissioner Butch Borasky questioned whether the board is properly functioning.

I dont think its ever reached its capacity what we all thought it would be, he said.

I never felt that the water board should be a place to start with. I felt we would be feeding a big monster, a money monster that is now growing. I would like to see it put back into the hands of county commissioners, Cox said.

Commissioner Lorinda Wichman declined to comment on her vote and Commissioner Dan Schinhofen said his vote was to fulfill our statutory duties under the NRS.

The WDGB is a political subdivision of the State and has duties, as prescribed by law, to fulfill. Working together with the BoCC I am sure we can make sure all water issues we have control over, can be addressed, Schinhofen said.

Among some of the most recent issues that were handled by the board in recent months are Rapid Infiltration Basins (RIBs) and Basin 162 Groundwater Management Plan.

The remaining three members on the board are Dan Sweeney, James Weeks and Ken Searles.

Board members must live in the area they represent. Members of the board serve at the pleasure of the Nye County Commission and receive a stipend of $80 per meeting.

The May 27 meeting of the board was canceled. Officials said Nye County commissioners will need to appoint more members to the WDGB before it can have another meeting.