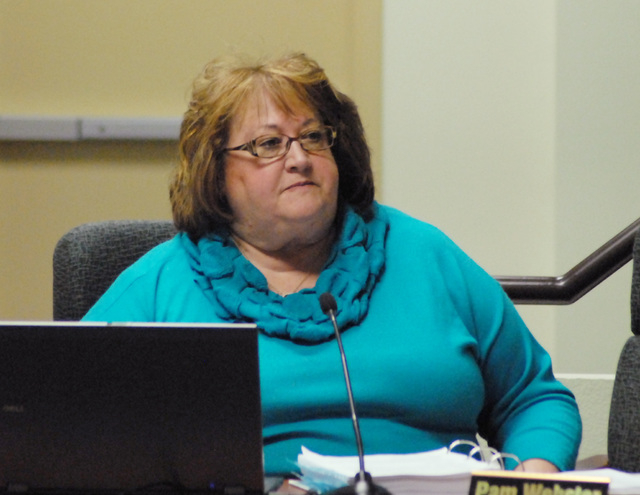 Nye County Manager Pam Webster will officially add the duties of comptroller today to help guide the county through its current budget season.

Webster will replace Amy Fanning, who had been a comptroller since 2014. Nye County commissioners appointed Webster as interim comptroller at the March 15 meeting after Fanning had announced her resignation.

“The reason why we chose her is because of her experience,” County Commission Chairman Frank Carbone said. “She has got over 30 years (of experience) in the financial world.”

The added responsibilities are to help bridge the time until a new comptroller can be hired. The county is in the process of working on its fiscal 2017 budget, which is due in May and starts July 1.

At the last meeting, commissioners waived a 90-day waiting period to post the position as they are looking to hire a new full-time comptroller immediately.

Webster’s added duties come with no salary increase. Her current yearly salary as a county manager is $121,867 after her contract was extended for two years in October 2015. No salary increase came with that extension, either.

“Pam is acting as the comptroller until we find a replacement for Ms. Fanning,” Carbone said. “Pam will still be the county manager with no change in pay.”

Webster has been an employee of Nye County since 2006 when she was hired as a comptroller and budget director. After spending a year in that position she was promoted to assistant county manager and later county manager.

She holds a bachelor of science degree from the University of La Verne in La Verne, California.

Prior to coming to Nye County, Webster spent 18 years in the aerospace industry in southern California where she held various financial positions including project accountant, manager of proposals, manager of budgets and rates. She also worked as a government liaison for the consolidation of five facilities in Arlington, Texas.

“I went on to work in an engineering research and development organization as the financial manager responsible for accounting and financial statements, procurement, budgets, project cost management,” she said. “I implemented a multi-million dollar financial system including an integrated project costing capability.”

The county is currently projecting a $1.5 million general fund budget shortfall. In February, the county was put under fiscal watch by the Nevada Department of Taxation after the state identified several financial conditions in the county serious enough to warrant the fiscal watch. However, the watch does not put the county under state control, only increases the county’s financial reporting to the state.