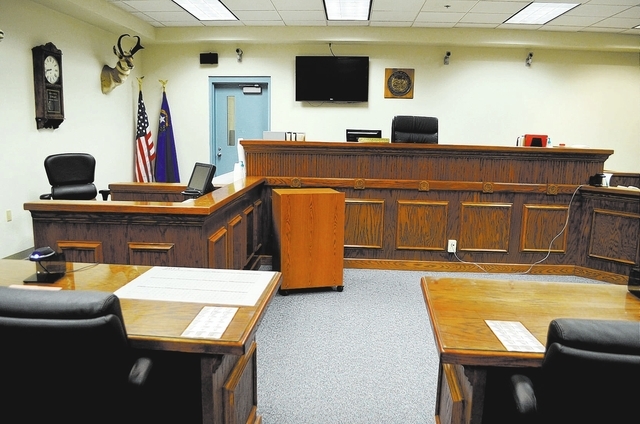 District Court officials dodged a bullet this time when the Mountain View Casino civil trial was settled, which Fifth District Judge Kimberly Wanker said would’ve tied up the courtroom in Tonopah for up to six months.

That suit was filed after the Mountain View Casino burned down in 2003. The plaintiffs named a number of defendants, even a company supplying food. Visiting Senior Judge Robert Estes was scheduled to hear the case. There were 120 motions filed.

But Nye County commissioners Tuesday were persuaded to contribute $17,000 anyway toward the remodeling of the Tonopah Justice Court, built in 1995, which Justice of the Peace Jennifer Klapper said was outdated and not handicapped accessible. Wanker added it’s dangerous.

Wanker said court could have only been held in the smaller Justice Court room for routine, quickly disposed matters seen during law and motion day while the complex Mountain View Casino case dragged on.

She talked to Klapper about adjusting the jury box, adding it’s critical a jury box be able to handle 14 jurors. Wanker urged county commissioners to think toward the future and what facilities would be available in three or five years.

Wanker said the law library at the Tonopah Courthouse was removed, it was out of date and took up a lot of space.

Klapper expects to tap specialty court funds for the majority of the work, she estimated it would cost a total of $110,000. The county will primarily pay for carpeting over the remodeling work and relocating the electrical work for the Jefferson Audio-Visual System (JAVS) the court uses to video tape hearings.

Klapper selected Ben Paul Construction of Fallon for the job after requesting estimates from three Pahrump electricians and one from Tonopah.

A $42,500 bid from Ben Paul Construction includes demolishing a portion of the raised jury platform and moving the jury wall towards the jury platform; patching an existing wall; re-configuring the witness box with a raised seating platform and a ramp; filling in an opening to the right hand side of the judge’s bench to close off a walkway to the witness stand; installing new base board to match existing base boards; and removing a two-foot by four-foot piece of concrete block wall to add a wall cabinet for the audio-visual system. For the county commission’s part, Ben Paul bid $6,327 to supply and install 1,260 square feet of carpeting and floor preparation, moving the audio-visual system will cost another $10,823.

“The original design for these changes started out relatively small and they have really grown to give a functional courtroom where they were limited in the past. Incorporating these ADA changes and expanding the ability to work with other courts is an important consideration,” Nye County Manager Pam Webster said.

She added the court specialty funds may only be used for these type of projects.

County Commissioner Dan Schinhofen asked whether the commission should go out for bids. District Attorney Brian Kunzi said the Supreme Court came out with a far-reaching decision that sets forth the independence of the judiciary.

“County commissioners own the building,” Kunzi said. But he added, “When it comes to structural changes to the building, I felt that needed to come to the board for approval.”

Wanker also asked commissioners to consider the facilities in Pahrump. She said Monday there was a panel of 120 jurors overflowing into the hallway, some of whom had to sit on the floor.

“We don’t have space to seat those people, they have to sit in the trial. I had to declare one mistrial here, I was close to declaring a second mistrial,” Wanker said.