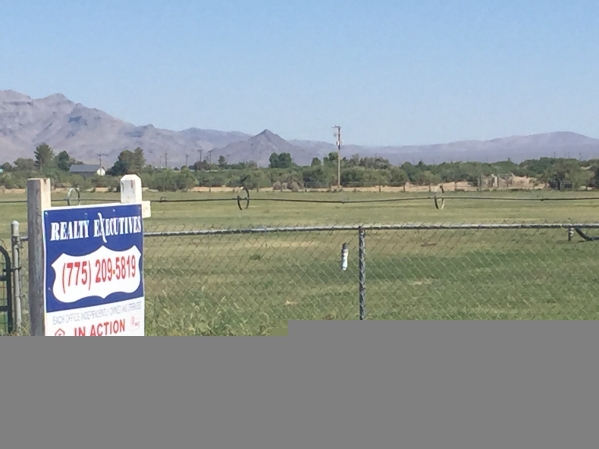 The Binion Ranch is still up for sale after Nye County officials voted down the idea of purchasing the property during the board meeting July 21.

The rejection was on behalf of the county and the Town of Pahrump, which is overseen by the county.

Assistant County Manager Joni Eastley put together a feasibility plan that evaluated a 138-acre parcel listed for sale for $1.75 million after Commissioner Donna Cox had brought up an opportunity to purchase the Binion Ranch located at 700 E. Wilson Road in Pahrump.

While a feasibility study was being conducted, Eastley said two potential purchases of the property fell through, one that reached escrow.

“The Binion Ranch will stay on the market until someone purchases it,” she said following the lengthy discussion. “I support the board no matter what the decision is.”

Some of the factors considered during the course of the study included the history of the property, existing infrastructure, transportation connectivity and access to utilities.

According to the improvement cost estimates submitted by Public Works Director Dave Fanning, the tasks related to preparing the property for public use would total over $5 million. Some of the most expensive elements included roads, sanitary sewer and water works.

The preliminary cost recap that outlined the estimated costs to prepare the property for development was listed at $4.8 million.

The idea drew mixed reaction from residents and officials.

Resident Gene Frank, a member and officer of the Pahrump Valley Parks and Recreation Advisory Board, said the committee had voted unanimously to oppose the proposed purchase.

“To us, it doesn’t make sense,” he said. “The cost isn’t only the $1,750,000 but an additional $6 or $7 million in development. â¦ The other point is that the current fairground already has a revenue stream and more revenue streams can be developed which would allow further funding for the developer.”

Pahrump resident and retired businessman Louis DeCanio said the county should let private business invest in the property and cover all of the related expenses.

“I think the county getting involved in this property is a bad investment,” he said. “Let private business come in, let them put their money in, let them pay all of the expenses, let them hire people, let them pay the bills, so the county and the town can prosper, not create more public funds pumped into that.”

The history of the property dates back to 1919 when the original owner of the property, Frank A. “Pop” Buol, received a patent for the property by order of then-Gov. Emmet Boyle. Buol later used the property to operate his winery and it remained intact under the Binion.

Since Buol moved to Tonopah in the mid-1950s, the property had changed several hands before the Binion family.

Several meeting attendees said that the property could add historic value to the area and subsequently bring an additional revenue stream to Pahrump.

“As a society, we aren’t preserving our past,” said Pahrump resident Jonn Bosta. “Here is one of the older pieces of property and it could be used as a tourist attraction for people to come and visit and see what life was like in the 1950s here in Pahrump Valley.”

Citing county financial woes, officials dismissed the idea of going forward with the purchase of the Binion Ranch and evaluating where the funds would come from to secure the property.

“I don’t support this in any way,” said Commissioner Dan Schinhofen. “Especially, if the town spends money, it’s going to take away from those other projects. Taking this possibility for revenue out of our stream doesn’t make sense to me.”

“Where are we getting $1.7 million to buy it?” asked Commissioner Butch Borasky. “We’ve got all kinds of problems and everything else, and we want to take and use taxpayers’ dollars to buy a piece of property on a speculation. Two, we are going to lose tax revenue from that property, if we buy it, three, we have got all kinds of additional liabilities to the county, or town, whoever. â¦ I think it’s a great piece of property, yes. I think somebody else should buy it and improve it and get the revenue off of that.”

The property is currently listed through Norma Jean Opatik at Realty Executives, who said Tuesday there are two interested prospects formulating plans for the site.

She said the land has been appraised at $2.4 million, and has 139 acre feet of water rights and for wells.