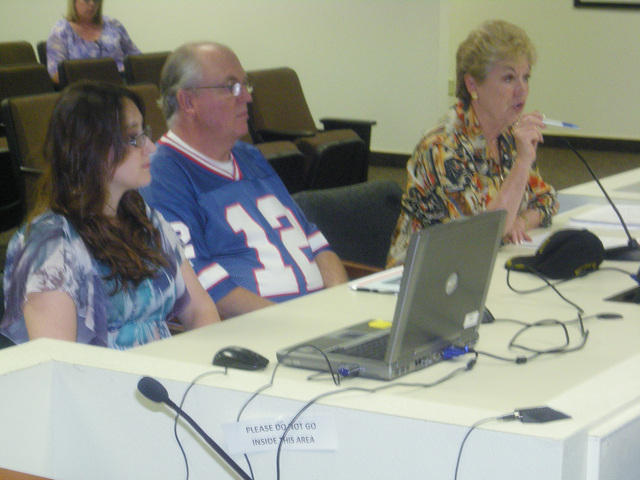 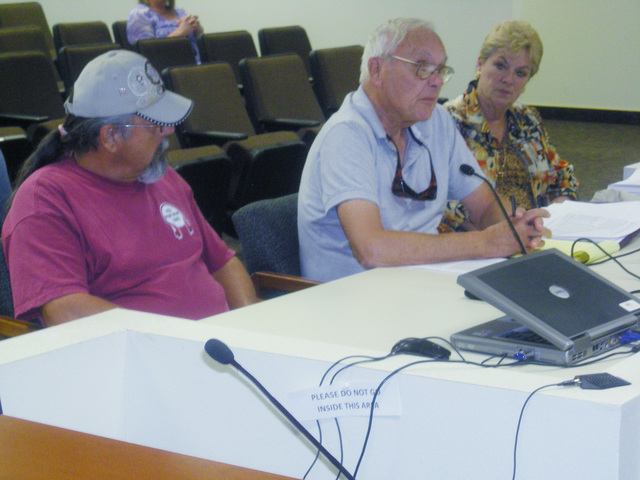 Pahrump Town Manager Susan Holecheck said the Federal Aviation Administration wants county commissioners to make a strong decision on the Pahrump airport project, but county commissioners Wednesday didn’t share the same enthusiasm as town officials. In fact, they expressed some reservations about the long-term project, which is almost 20 years in the making.

County Commissioner Frank Carbone had questions about whether there would be revenue to support operating an airport. The plan is to use aviation fuel sales for 70 to 80 percent of it. He also thought county officials needed more answers and some studies completed years ago needed to be updated. Carbone wanted to see core samples after hearing geologists question soil conditions.

Carbone asked town officials point- blank: “Why an airport for Pahrump and what is the strategy for that airport? What is it going to be used for and will it be a help to Pahrump and the surrounding area?”

Commissioner Donna Cox was the only one of four commissioners in the discussion to voice outright disapproval though.

“One thing I don’t want to create here is a white elephant that ends up being on the taxpayer’s back,” she said. “With the economic times being so bad now and all the fear factors out there I’m not sure things will be better by 2017. We really need a couple more years of support for this thing. I’m just nervous about it, very nervous about it.”

County Commission Chairman Dan Schinhofen asked, “Does the county also back stop the Tonopah, Beatty and Gabbs airports? Do we have an MOU we help them with grants or would take responsibility if they failed?” Public Works Director Dave Fanning said no.

The planning for a Pahrump airport began in 1987, Holecheck said. The town has so far received more than $1 million in FAA grants, the town only has to pay a 6.5 percent match.

“If you have people saying this is taking too long or it’s costing too much money let me just say, number one, if we decide not to go any further with the GA airport, there is still a possibility the FAA will request all or some of the grant monies to be reimbursed,” Holecheck said.

“I think we can leave a legacy for Pahrump. We never know what tomorrow’s going to be. If you do determine you don’t want to go forward, I can’t predict what the FAA is going to do,” Holecheck said on further questioning.

The original proposal estimated a $33.7 million price tag for a Pahrump airport. The recession and modifications to the capital improvement plan reduced that to around $21.2 million. Holecheck said about $17 million is eligible for FAA funding.

“General obligation bonds issued for 20 years at a hypothetical rate of 4 percent would be the financing vehicle that would be available,” Holecheck said.

But Carbone asked whether there is a plan for paying back the $4 million bond. Holecheck admitted that hasn’t had sufficient discussion. Carbone said $4 million is a lot of money, especially with declining ad valorem property taxes, he questioned where the revenue stream would come from.

Holecheck said the cash flow analysis indicates over a 20-year period the airport will require an annual subsidy of $113,500. The town is hoping to open the airport in 2020; construction could begin in 2017.

Holecheck said the county has to determine whether they want to buy the land or lease it. The U.S. Bureau of Land Management doesn’t have the property on the disposal list, so the town would have to lease it. The lease rate for the initial 20 years is calculated at $48,750, of which 93.75 percent is eligible for FAA funding. If the property were sold, the county would pay $3,000 per acre, which for 650 acres would equal $1.95 million.

Holecheck said, “I’m not sure that BLM is desirous of this airport, or at least I would be somewhat led to believe they are not as proactive regarding this airport as hopefully they could be.”

The county also has to decide if they want to run the airport or hire a fixed base operator. Holecheck said the financial feasibility study suggests a county-run operation, reaping the proceeds from the sale of aviation fuel.

Then there is a conflict with the revised Pahrump master plan. The BLM has asked several times if there are plans for non-aviation development around the airport, Holecheck said. The FAA also wants to know if an airport access road is still being proposed, which is no longer shown on the master plan.

A memorandum of understanding is also needed for the airport, she said, identifying co-sponsors. The county already agreed to be a co-sponsor.

The airport master plan proposed traffic patterns to the west to minimize noise. Holecheck said the nearest house to the south is five miles, to the east it’s three miles along Pahrump Valley Boulevard. High ground between residences would provide visual buffers, she said.

Issues like visual and noise impacts will be done during the upcoming phase II of the environmental impact statement, a public hearing is scheduled in September.

“They will be using the airport for refueling and for putting any overflow aircraft they can’t put on the ground that they turn away on a daily basis,” Dolan said. He also mentioned it as a base for smoke jumpers battling wild fires.

“During the last fire, on Carpenter Canyon, we all met in this room many times with briefings from the forest service. I established open line of communication with the forest service for this fire. They either had to go to Boise, Idaho, over to Arizona or San Bernardino to get retardant or fuel to fight this fire,” Dolan said.

“There is no tax dollars from either Pahrump or Nye County public being spent on this airport. This is 100 percent room tax and grant money,” he said.

He also questioned how a $113,500 subsidy would have to be made up. Holecheck said with the growth in Pahrump, like the new Holiday Inn Express, there may not be a shortfall.

“In all reality when a plane lands, you can hear it for many, many miles. To say it will not have an effect on that part of town, because of mountains here or there, I think that’s an inaccurate statement,” Borasky said.

When Nye County takes over the town functions Jan. 5, 2015, there will be a balance of $262,446 in the airport revenue fund, Holecheck told Borasky. She said they’re hoping to get approval for another $500,000 FAA grant.