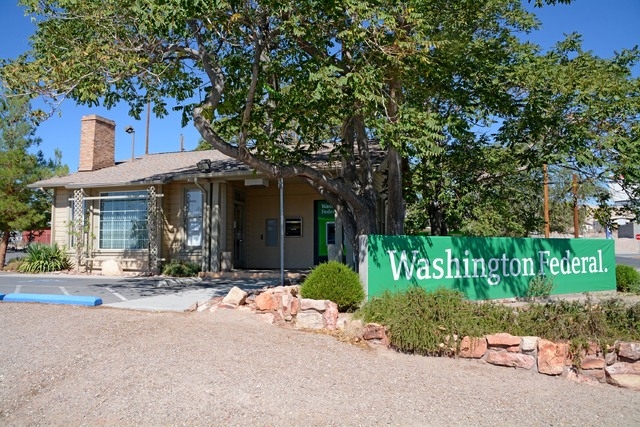 Nye County Commissioners on Tuesday voted to support an attempt by the Beatty Town Advisory Board to prevent the closure of the Washington Federal Bank, the only bank in that town.

Commissioners admitted they didn’t know what good the resolution would do.

The bank is scheduled to close Nov. 14.

An Aug. 25 letter from the Beatty Town Advisory Board states it would be the first time in over 30 years that Beatty didn’t have a local bank branch. Washington Federal Bank was formerly a Bank of America branch, located where Highway 95 makes a bend in the center of town.

At the time, Bank of America spokeswoman Colleen Haggerty said the sale was to find a community bank that would keep the branches open.

“The decision to sell these locations to a community bank rather than closing them was made to preserve as many jobs as possible and to ensure these communities will continue to be served with convenient local branches,” Haggerty said according to the Las Vegas Review-Journal.

In a little over three months, customers were then told the local bank branch was closing. Signs were posted Aug. 15 notifying customers that once the location closes the nearest Washington Federal Branch is in North Las Vegas nearly 109 miles away.

The Beatty Town Advisory Board said it might have been better if Bank of America was honest and closed the Beatty location, so customers and employees would have retained relationships with one of the largest banks in the country, giving them greater access to their finances.

“Instead customers and employees were given a false sense of security in a much smaller institution with a much smaller network, with the same end result,” a Beatty Town Board letter to the commissioners read. “Jobs were lost and there will no longer be a brick and mortar banking presence in Beatty.”

The Beatty letter said the closure hurts people of low to moderate income who may not have the means to drive to Las Vegas, or business customers, utilities and civic organizations who need to conduct transactions that require the assistance of branch personnel.

The Pioche and Hawthorne branches are also being closed.

The Fedeal Deposit Insurance Corporation Improvement Act of 1991 requires an interstate bank proposing to close in a low to moderate income area is required to include in its notice to customers the mailing address of the appropriate federal banking agency. That would be Frank Hartigan, deputy regional director of the Federal Deposit Insurance Corporation, 25 Jessie St. at Ecker Square, Suite 2300, San Francisco, Calif. 94105. But the FDIC doesn’t have the authority to approve or prevent the branch closing.

A Sept. 18 letter to the Beatty Town Advisory Board from the Office of the Comptroller of the Currency said, “the banks decision to close the branch is a business decision that does not require the OCC’s approval. however, we will consider your comments in connection with our next Community Reinvestment Act evaluation of the bank when we will review the effect of the bank’s record of opening and closing offices. In addition we will take the bank’s record of performance under the CRA into account when we review applications by the bank to establish or relocate branches or to merge with other banks.”

“It’s not unreasonable for this board to deny an action that this board has no authority over,” Wichman said. “So I would like to propose a letter in support of the Beatty town advisory boards’s letter sent to Washington Federal Bank. That’s the only reasonable action we can take. I would like to show support for the town of Beatty. We cannot deny or approve or argue in any way a personal business’s choice.”